August 22, 2016 - Pierluigi Musarò
Two different pieces of news invite us to reflect on the effect of the media on public understanding of the so-called ‘migration crisis’. And more specifically, on how media performances contribute to shaping the Mediterranean as an emotional and physical setting in which fears and insecurities can be used for both progressive as well as regressive purposes.

Two different pieces of news released on July 28 invite us to reflect on the effect of the media on public understanding of the so-called ‘migration crisis’. And more specifically, on how media performances contribute to shaping the Mediterranean as an emotional and physical setting in which fears and insecurities can be used for both progressive as well as regressive purposes.

As I have argued in a previous article – the military-humanitarian response to the political ‘migration crisis’ can be understood as a spectacle – or as a kaleidoscope refracting different lights – that invites us to look at the Mediterranean Sea as a ‘humanitarian battlefield’. But the two initiatives released last week make people ‘aware’ that there are different ways of looking this liquid ‘battlefield’ in the face.

On July 28, Barcelona’s mayor Ada Colau unveiled a large digital billboard that shows the number of migrants and refugees who have died in the Mediterranean Sea in 2016. The large metal rectangular pillar is located near one of the city’s most popular beaches and comes with a digital counter that began with 3,034 – the number of fatalities this year. But, as the above inscription on this ‘monument of shame’ states: “This isn’t just a number, these are people.”

On the same day, Italy’s interior minister, Angelino Alfano, launched a media campaign aimed at dissuading African migrants and refugees from making the unsafe journey to Europe over the Mediterranean.  Drawing upon the same estimated number of people that have been killed this year while attempting to reach Italy’s southern shore, the Aware Migrants campaign features news, articles and powerful video testimonials from refugees who have made it to Italy but had to endure physical and sexual abuse from people smugglers along the way. Developed in partnership with the International Organization for Migration (IOM), the €1.5 million campaign was launched in three languages – English, French and Arabic – on various platforms, including its own website, Facebook, YouTube, Twitter and Instagram.
As different ways to framing current tragedies and raising awareness on what is happening in the Mediterranean, both the initiatives do not only report on the world ‘out there’, but also constitute this world in meaning, opening up the space for certain forms of intervention and the production of specific types of subjects.

Tracking the dramatic deaths in real time, the digital monument in Barcelona invites us “to look the Mediterranean in the face and look at this number,” as Colau has said: “3,034 people who drowned because they were not offered a safe passage.” This radical initiative aims at making ‘us’ – European citizens – aware that our human fear towards these strangers, which often becomes open hostility and shameless xenophobia, and is expressed in racist prejudice and physical violence, is transforming the same blue sea of our relaxing holidays into a horrific graveyard. As such, it focuses on the pressures that these deaths are exerting upon the concept and practice of collective responsibility in Europe to blame our indifference. It reminds us that, despite Enlightenment traditions and Kantian cosmopolitanism, the EU is acting openly hostile towards asylum seekers. It forces us to reflect upon the fact that the ethics of responsibility are today suspended between European democracies’ moral imperative to save the lives of people in need and an economy of indifference that, through denial and inaction in the sea, allows for the deaths of certain populations to take place without sanctions or repercussions. 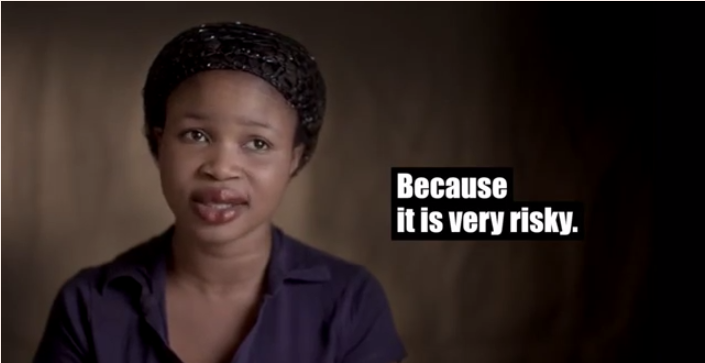 On the contrary, assuming that migration is a decision often based on false expectations (“many migrants leave their home without a concrete project of precise idea of the socioeconomic and political situation of their country of destination,” said Aware Migrants), Alfano’s campaign aims at making ‘them’ aware – i.e. would-be African migrants – that if they are aspiring to leave their home countries in search of better lives for themselves and their families, they will experience the dangers of violence and exploitation during their perilous journey. Drawing upon statistics on migrant deaths in various regions and from various causes in its effort to reduce the influx of asylum seekers, the campaign warns would-be migrants that their dream can “end up a nightmare”: the nightmare of women raped in front of their husbands in Libya, or people seeing oved-ones die of thirst in the desert or drowning at sea. Furthermore, the news, articles and videos of the campaign advise potential newcomers from 15 African countries (including the top three asylum seeker suppliers to Italy – Nigeria, Eritrea and Sudan) that, even if they are strong and lucky enough to reach our shores, they need to convince us that they are really in need of international protection. Indeed, besides the stories of survivors who experienced terrible dangers to come to Europe, the campaign advises Africans that 60% of refugees had their applications rejected last year because they were not deemed by authorities to be ‘true refugees’ fleeing war.

It is certainly true that, as Barcelona’s mayor, Italy’s interior minister recognizes that “Europe’s migrant crisis is an epochal struggle,” affirming that “obviously, we pride ourselves on welcoming all those fleeing war.” Nevertheless, as he said, “we can’t welcome everybody.”

It is worth noting that the two initiatives adopt a ‘necropolitical’ tool to tackle different aspects of the same ‘migrant crisis’. While the Spanish mayor seeks to tackle the crisis of humanity that is affecting European migration policies, urging everyone to awaken from indifference, Italy’s interior minister seems to legitimate our ethical failure highlighting that ‘they’ are unwanted and undeserved.

If the former aims at convincing European citizens (and policy makers) to be more welcoming, the latter seeks to keep refugees out by making it clear that they are have not been invited, and that we aren’t willing to welcome many newcomers.

Targeting different people but with the same aim of making them aware of the challenge of responsibility, the two initiatives appear to give opposite advice regarding the acceptance of immigrants.

Don’t turn a blind eye to poor and helpless people, they are in danger, we can avoid these deaths, it is our responsibility to help those who are victims of our hostile policies – Colau seems to be saying to the European audience.

Open your eyes and do not even think of starting the journey, it is dangerous and you are (perceived as) a danger, the loss and suffering you will go through is your own responsibility – this is the veiled warning launched by Alfano and directed at the African audience.

What is the evidence of the impact and effectiveness of these campaigns to awaken ‘us’ from indifference or to deter ‘them’ from leaving?
(To be continued)