January 19, 2017 - Eleonora Camilli
Eleonora Camilli and Alberta Aureli went to Belgrade where more than a thousand refugees are stuck out in the cold without any assistance. Here, under a blanket of snow, lies Europe’s last border: no one can go on ahead, but no one wants to go back either.

“Just give me two minutes, then we can start.” Asif’s legs won’t stop trembling; today temperatures have plummeted to fifteen degrees below zero. Between tonight and tomorrow maybe he will find a coat; in the meantime, he apologises for being too cold to talk, as if it were all his fault. In the long tract of land behind the bus station, there is nothing but ice and snow. About 1,700 migrants in transit live here in a few abandoned buildings, stranded on the Balkan route since last summer when border controls were tightened. Now Belgrade, the White City, has become their last border: no one can go on ahead, but no one wants to go back.

The closure of the Balkan route

According to the United Nations Refugee Agency (UNHCR), over 7,000 migrants, refugees and asylum seekers are stranded in Serbia (last update: December 2016). 81 per cent of them live in government reception centres. Most of the remaining two thousand people live outside of those facilities in this huge unofficial camp. Without heat, without toilets, without assistance. The majority of them are Afghans, but there are also Pakistanis and Iraqis. All are teenagers and young men between the ages of 16 and 22. Many refugees arrived here alone, covering the overland route that crosses Turkey, Bulgaria and now ends in Serbia. Only a handful of them have been able to get to Northern Europe: France, Germany or Norway. Those who try risk being sent back to Bulgaria, as per the Dublin Regulation, or even to their home countries. According to the Italian Caritas’ dossier La rotta dei Balcani, more than 850 thousand people, travelling through Greece, crossed Macedonia, Serbia, Croatia, Slovenia and Hungary in 2015. And now many have decided to wait, even in the bitter cold, persuaded that sooner or later the route will be opened again just like one year ago.

Just like Asif, who was an interpreter in his country. “I left Afghanistan because my life there had become unbearable, but this is not life either. We have no facilities here, we have nothing. Nobody cares about us. Don’t we deserve human rights anymore?” he asks. Asif finds it impossible to understand why he cannot leave Belgrade: “None of us want to stay here, the authorities don’t want to help us, I don’t get why they don’t just let us go. We’re falling ill in this dreadful place, we need to take showers, we need medical care, but we are denied everything.” 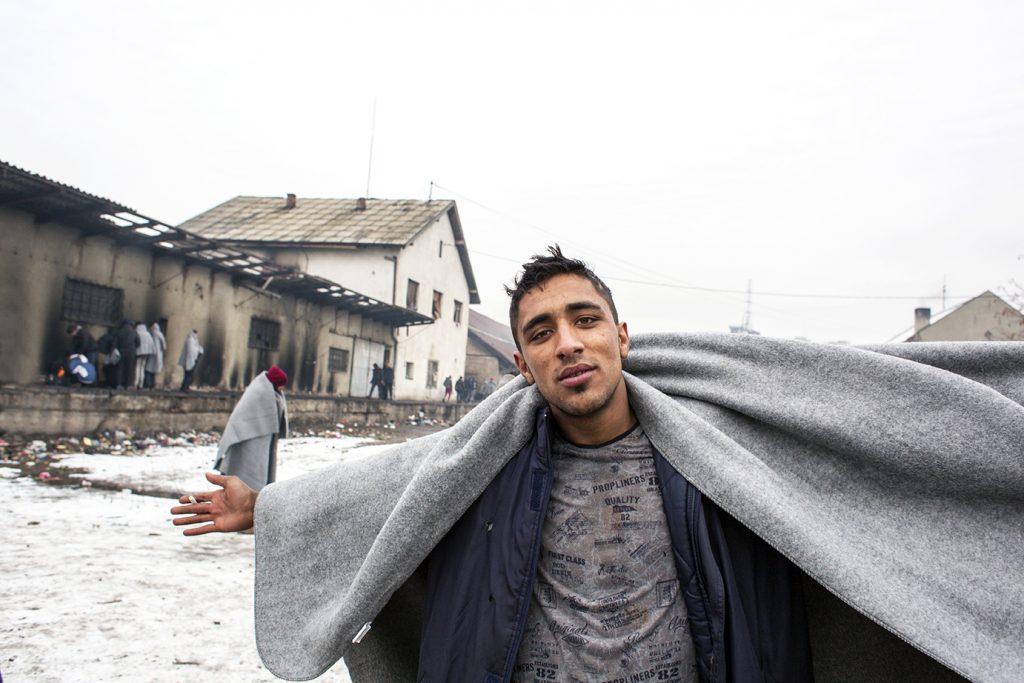 Andrea Contenta of Médecins Sans Frontières Serbia, one of the few organisations that have come to help the migrants stranded in Belgrade, explains that the Serbian government has clearly asked groups not to assist people outside of government centres in order to avoid the formation of unofficial refugee camps. While we talk, some volunteers are distributing blankets to a seemingly endless line of people. “These buildings were occupied at the end of August by people who arrived here several months before that,” he says. “Some of them don’t want to go to the reception centres, others have tried, but most of the Serbian centres are already full: they are exceeding their maximum capacity by 110 and 200 per cent.” In the nearby station park, the NGO has also set up a mobile clinic where migrants receive medical care daily. “Many suffer from skin disorders like scabies, but also skin and hair parasites, “ Contenta adds. “We meet them every day, and over the last number of months we have seen a significant rise in diseases, especially of the respiratory tract.” Sanitary conditions inside the camp “are incredibly precarious, inhuman and unacceptable” he explains. “Since the end of summer we have begun calling roll and have tried to contact the national authorities in every way, from the Minister for Health to the mayor and the municipality of Belgrade. We wanted to ask for permission to install at least toilets and showers so that the refugees have at least some basic services. All we received was a refusal; so now 1,700 people are living without any toilets, without running water, nothing. They have been stuck here for months. And Serbia, which has always been considered a good example for its management of Balkan migration, is about to become a new Calais.”

Farhood, a sixteen-year-old boy, invites me to his “room”: a part of the windowless building where heaps of rubbish are piled up in a corner. They will be burned for heating. Inside the building, the air is unbreathable, they burn anything they can find: old railway beams, pieces of wood collected somewhere, plastic. “Staying here is too hard, we can’t take it anymore,” he keeps saying. He would like to join his brother in France: “Life here doesn’t make any sense, there’s no work, in France my brother would help me.” There aren’t any partitions in the big rooms, the luckiest ones have a small camping tent to spend the night in, the others gather together in the most sheltered spots, where the freezing wind from the broken windows cannot reach them. A boy lies in a corner, coughing and panting, running a temperature. Just a few steps away someone has placed a mat for their daily prayers, the only ordinary thing in a completely out-of the-ordinary situation. 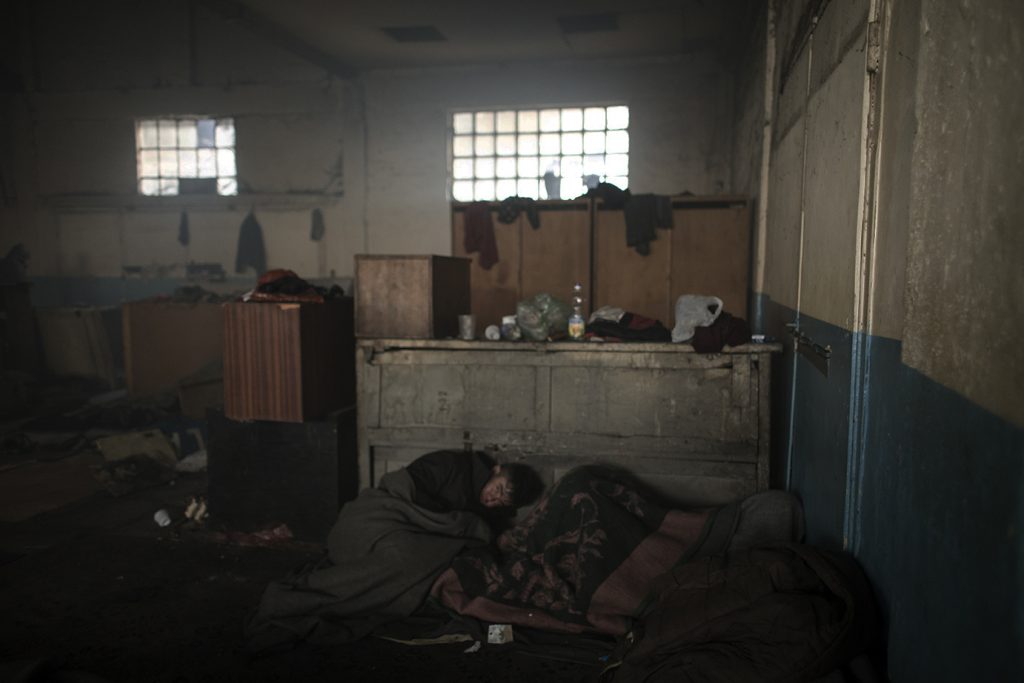 Washing up is another problem that everyone solves differently: there are those who bathe in some old abandoned tanks in the nearby industrial area, those who fill up a bottle somewhere and try to at least wash their face, and those who melt ice to brush their teeth. Migrants receive their only daily meal thanks to the Hot Food Idomeni group of volunteers, the same who sprang into action during the refugee crisis at the Macedonian border. They cook chorba, a vegetable soup with legumes, and serve it hot with a piece of bread. Apart from nourishment, it will provide some warmth. Standing in another long and orderly queue against the white landscape, everyone waits their turn. When we come back the next day, the temperature has risen and it has started to snow. Bilal, wrapped up in a grey blanket, takes his portion and crouches on the ground to eat as fast as he can, surrounded by birds begging for his leftovers.

“I’m from Chicago and I wanted to travel Europe,” says Nina Darner, one of the volunteers. “In Greece I met this group of people helping the refugees and I decided to join them. Living conditions here are awful, but we do whatever we can.” Hot Food Idomeni volunteers come from all over Europe and the world, and among them is also a 28-year-old Italian boy, Paolo, who has decided to spend his Christmas holidays from work here. “In the past, helping others was seen as a good thing,” he stresses, “but now, helping these people who don’t have a thing, seems like a revolutionary act.” Without the voluntary assistance provided by this young group, migrants in Belgrade would not receive any food or clothes at all. 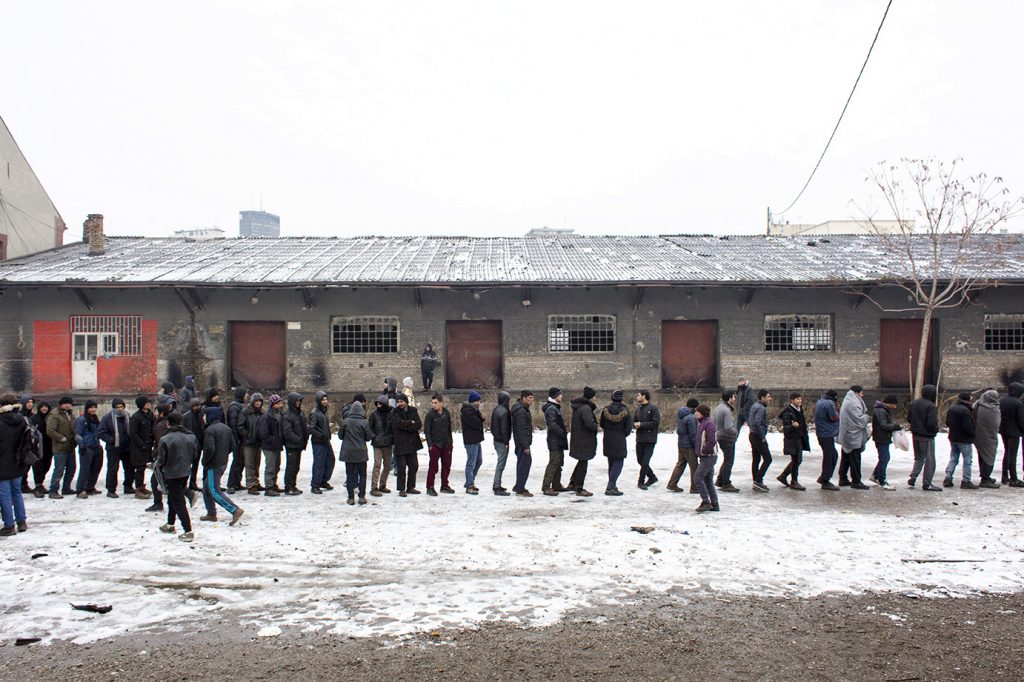 Over the past few months, Ivan Miskovic, spokesman for the Serbian Commissariat for Refugees and Migration, has accused humanitarian organisations of making empty promises to the refugees by supporting them in the old station buildings instead of convincing them to enter the government centres. “In such a situation, it is not easy for us to offer concrete help,” he reaffirmed in his recent interview with Ansa after the entire world saw pictures of the migrants under the snow. According to Miskovic, most of them refuse to move for fear of being identified and not being able to continue their journey onwards to other European Union countries.

“The thing is, we have no shoes, my feet are freezing!” a boy shouts at me, while I look for the last time at that long, long line of people, which reminds me of some of the most terrifying images from our recent history. After a moment, I hear another voice in the distance: “Italy, Italy.” It’s Asif, he’s smiling. He has found a coat.

Cover photo: Refugees queuing under the snow at the camp in Belgrade. All photos by Alberta Aureli.
Translation from Italian by Lucrezia De Carolis. Proofreading by Alexander Booth.