Homepage >> Approfondimento >> What is going on in Como, the new Italian emergency zone

September 27, 2016 - Andrea Quadroni
The Como San Giovanni railway station is Italy’s new emergency zone. Through images and words, Andrea Quadroni and Emanuele Amighetti tell us about the last outpost before the Swiss border, with the opening of the new temporary immigrant reception centre and the evacuation of the makeshift camp, the unrelenting refoulement of immigrants according to the “Swiss method”, concerns over the treatment of unaccompanied minors and continuing calls for the opening of the borders.

This article has been slightly amended since its publication in Italian to keep up to date with recent developments. Parts which have been integrated in the original text are in italic.

Open gates and free circulation between 7:30 a.m. and 10:30 p.m. Admission restricted to those in possession of a badge, but no collection of fingerprints. Three hundred available places. Breakfast, lunch and dinner served under a big tent.

The new temporary reception centre was opened on Monday, September 19, at eight a.m. as instructed by the Prefettura. It was set up in less than a month, about one kilometre away from the Como San Giovanni railway station.

50 prefab boxes have been installed and equipped with heating and air-conditioning and are under the management of the Italian Red Cross, which will subcontract all remaining services, like catering for the meals. Migrants will receive a photo ID card to access and leave the centre: if they are absent for longer than 72 hours, they will lose their right to housing. Legal assistance and mediation will be coordinated by Caritas in collaboration with the trade unions CGIL, CISL, UIL and the ACLI. In two days, the centre has reached and exceeded maximum capacity (by five units, as I write). People who have not managed to enter sleep just outside on cardboard or pallets.

A few days ago, the station and the gardens just below it were cleared (without any intervention from the police, who just oversaw the process.) There, between the platforms and the gardens, for three months over three hundred migrants (mostly Oromo Ethiopians, Sudanese and Eritreans) had tried every day to cross the border into Switzerland or travel on to Germany and other northern countries.

At the reception centre, a small manual has been compiled over the last few days for the benefit of the migrants themselves, laying out some basic rules and explaining: “the reception centre has been activated to provide decent housing, given the worsening weather conditions over the coming months.” Only authorized persons will be granted access, “the centre will be open all day, which means you can come and go from the morning to the evening. Both men and women are welcome and families will not be separated. Medical assistance will be provided,” the document continues, “and you will also receive all types of useful information about your rights within the Italian reception system.”

Everybody will be given the option, within a certain term, to apply for asylum in Italy and subsequently be processed by the reception system. “Under no circumstances will the centre be a migrant detention or, worse, a deportation facility, which is banned under Italian law.”

Makeshift camps like the one that was in the gardens below the station recently will no longer be tolerated. A few days ago, before the opening of the centre, about a hundred migrants protested the government’s decision.

Among the chants of the migrants thanking the city of Como, the loudest one called for one thing only: “Open the borders.” 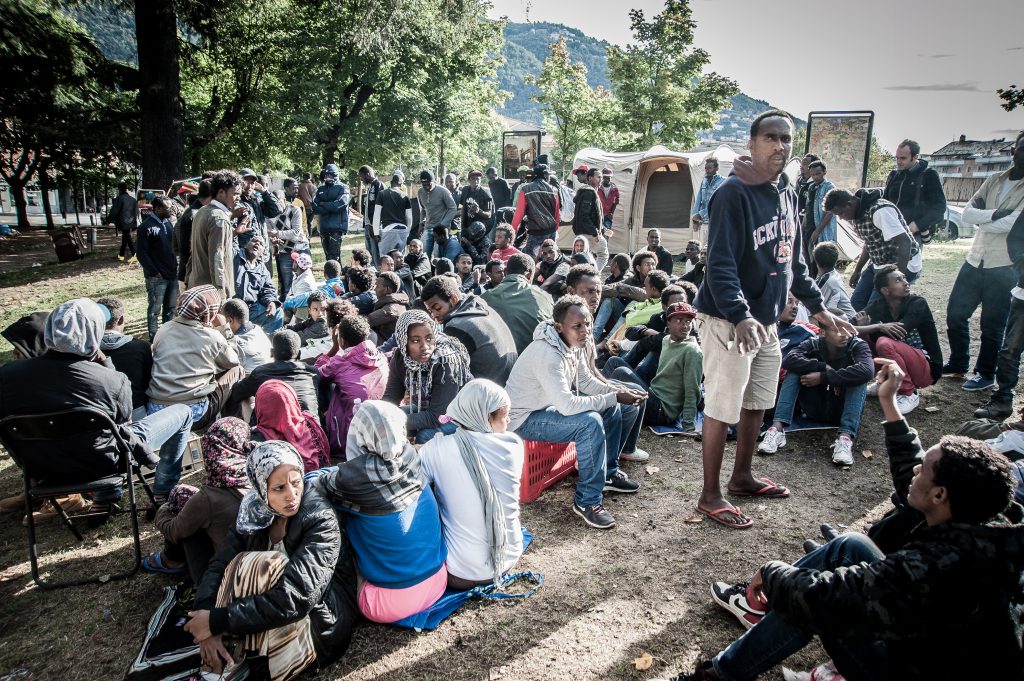 
The opening of the centre marks the beginning of a new phase and the end of a situation that began early in July, when dozens of migrants (mostly Eritreans and Nigerians) started to crowd the San Giovanni station, attempting every day to cross the border and travel on to Germany, only to inevitably be sent back.

Their number grew until it went over 500. In time, the gardens below the station became a forest of tents and blankets. A makeshift basketball hoop and a volleyball net appeared. The migrants kill time and try their luck attempting to cross the border by any means possible: by train, by bus or walking in the woods. A large number of these individuals had not been identified upon arrival in Italy or had escaped from centres in the southern regions.

One of the most controversial aspects is the forced transfer of migrants from the Swiss border to hotspots in Taranto by way of buses that are provided by Rampinini, the only company that applied to run the service which had been instituted by the Prefettura. The bus service costs about 20,000 euros per week (there are usually two rides), and it has been severely criticized, among other things, for the absence of interpreters and for failing to properly inform passengers on their final destination.

In Como, civil society was mobilized immediately with young parishioners passing out breakfast in the morning, Swiss humanitarian organization Firdaus (led by Ticinese MP Lisa Bosia Mirra and later replaced by Caritas, which sparked some protests) taking care of lunch and the Italian Red Cross and Caritas providing evening meals. A 20-seat Red Cross tent was set up for the more vulnerable cases and the families; and from late July till September 18, the Sant’Eusebio soup kitchen attracted up to 500 people, serving thousands of meals for dinner. Como senza frontiere [Como without borders], a collective of different organizations, also contributed from the beginning with assistance and various activities. The City of Como coordinated all these actors in their efforts to handle the emergency. 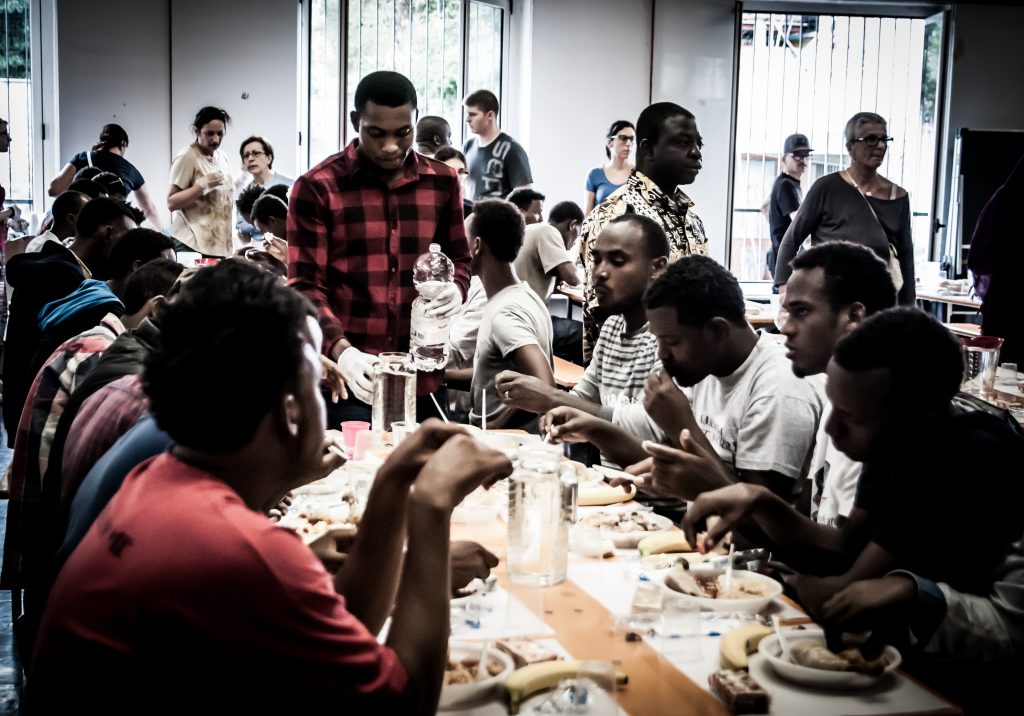 Numerous violations have been denounced in connection with the rejections at the Swiss border. In late August, the Association for Juridical Studies on Immigration (ASGI) and Firdaus, joined by Amnesty International, published their reports. According to these documents, the Swiss and Italian authorities violated several key human rights provided for by national, international and EU legal documents such as the European Convention on Human Rights, the UN Convention on the Rights of the Child, the Schengen Borders Code, The Dublin III Regulation and the EURODAC Regulation.

The situation of unaccompanied minors is particularly alarming. From mid-July till late August, there were 7,000 instances of refoulement at the Swiss border; according to data presented in an ASGI document on the basis of the information that was collected, during the same time 454 unaccompanied foreign minors were put in the care of Caritas and transferred to the facilities at the Rebbio parish, after being sent back to Italy by the Swiss authorities. The total number of readmissions was 602, since some minors were sent back more than once, in some cases even six times.

Most of the minors leave the reception facility after a few hours to return to the railway station. According to the reports, some of them were even left alone on Italian soil and simply told to contact the city’s Social Services Department.

In general, most of the migrants interviewed said they never received adequate information regarding international protection, upon arrival in Italy or later: “Both at the Italian and the Swiss borders,” ASGI’s Anna Brambilla said while presenting the report, “they are facing a serious lack of information and legal orientation services and interpreters.”

The day before ASGI, Amnesty International and Firdaus presented their report to the press, Swiss border officers answered reporters’ questions on the immigrant situation and the procedures for handling it. Up until that moment, for a month, they had given no TV interviews on the southern border, only written replies from Bern.

This attitude has sparked some controversy, especially in Switzerland, given the requests for clarification by several NGOs, from Amnesty International to the Swiss Refugee Council. First, Patrick Benz, head of the Swiss Border guards’ migration unit, explained the situation at the reception facility in Chiasso: “Most people are intercepted on trains, others at the ‘green frontier’ along the roads.” Migrants are then transferred to a nearby hall, where the more vulnerable subjects are identified. 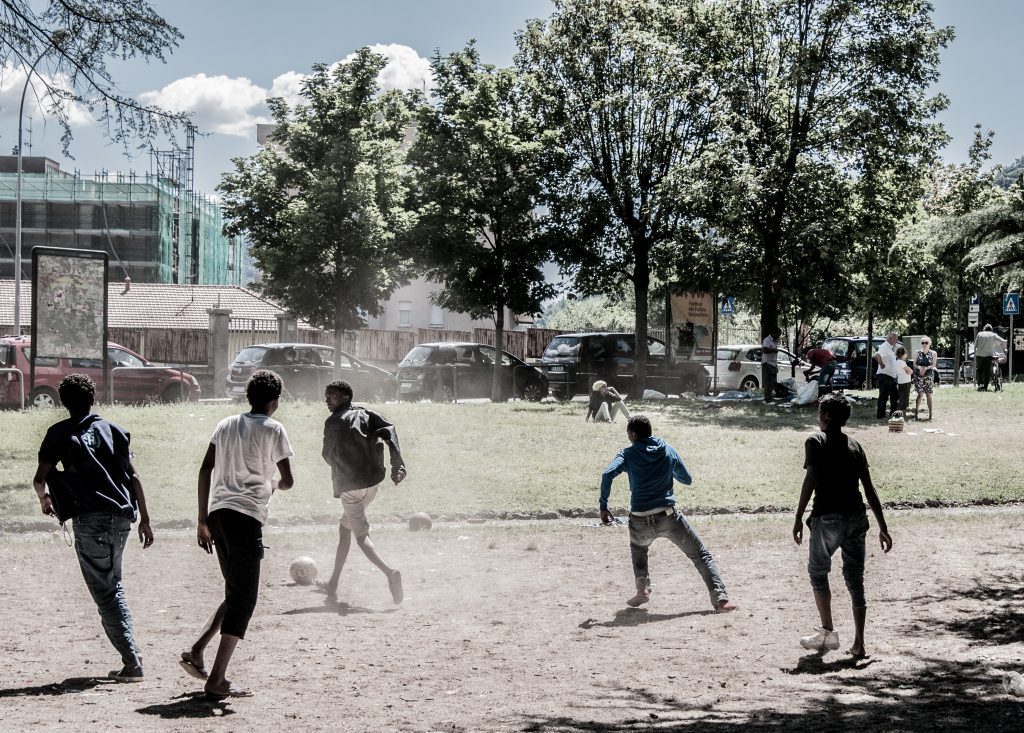 The next step involves determining who is sick and giving everyone colour-coded wristbands to establish the situation. “Luggage is checked,” continues Benz, “some individuals are searched, then identified by collecting fingerprints, except for those under 14.” Only then does the first audition takes place: “People are informed,” adds Benz, “through infographics and forms in over 50 languages and asked what they want, the reasons for their arrival and their stay.”

Those who are turned down are given over to the Italian police through a simplified readmission procedure; to this end, in late August a temporary centre was opened in Rancate. This new facility, designed to replace the civil protection centres that have been used so far (and which will remain available in case of emergencies). Those who have claimed asylum are transferred to the Chiasso registration centre, where the State Secretariat for Migration (SEM) is in charge. The procedure lasts up to 3 hours, 80% of migrants arrive by train and two thirds of those intercepted intend to travel on to northern Europe.

It was emphasized that the methods used by the authorities have not become harsher: the basic protocols are the same, procedures have only changed in response to a greater influx of migrants. Procedures for unaccompanied minors follow the guidelines of the Italo-Swiss agreements, which make no distinctions between adults and minors: those who have not  claimed asylum are turned over directly to the Italian authorities. Benz has also stressed that it is always the migrants who have to express themselves during interviews, and request help, even through gestures.

Many said that they were subjected to humiliating search procedures. Mauro Antonini, the commander of the border guards, has dismissed the accusations, explaining: “Men are searched by men and women by women in two distinct stages. First the upper body is searched, then the subjects their clothes back on and the lower body is searched,” he concluded. “Private parts are not searched systematically, only if there are further suspicions.” “Invasive body searches are always conducted by medical personnel,” added Attila Lardori, the border guards’ spokesperson.

Nonetheless, many were outraged after reading the story of Karim [his name has been changed], a 17-year-old Eritrean boy. “After being intercepted on a train by the border guards,” writes the Unione degli student Lombardia, who collected and published the story,  “he was taken into a room, then stripped naked and his private parts were searched. He says he was repeatedly humiliated by the Swiss police; he doesn’t go into details, but says he received a similar treatment only ‘in Libya and the Sahara.’ He did not expect to be treated the same way here. He says he was then pushed into a blue van with tinted windows along with 6 more people, and then taken to an unidentified location, a ten minutes’ drive from the station. He said: ‘I felt like I was on a watch list, in Eritrea only people who are under police surveillance are carried in vans.’ Once at their destination, he was taken to a bunker, an underground one, he specified. For the entire day he was given no food, or even a glass of water.” 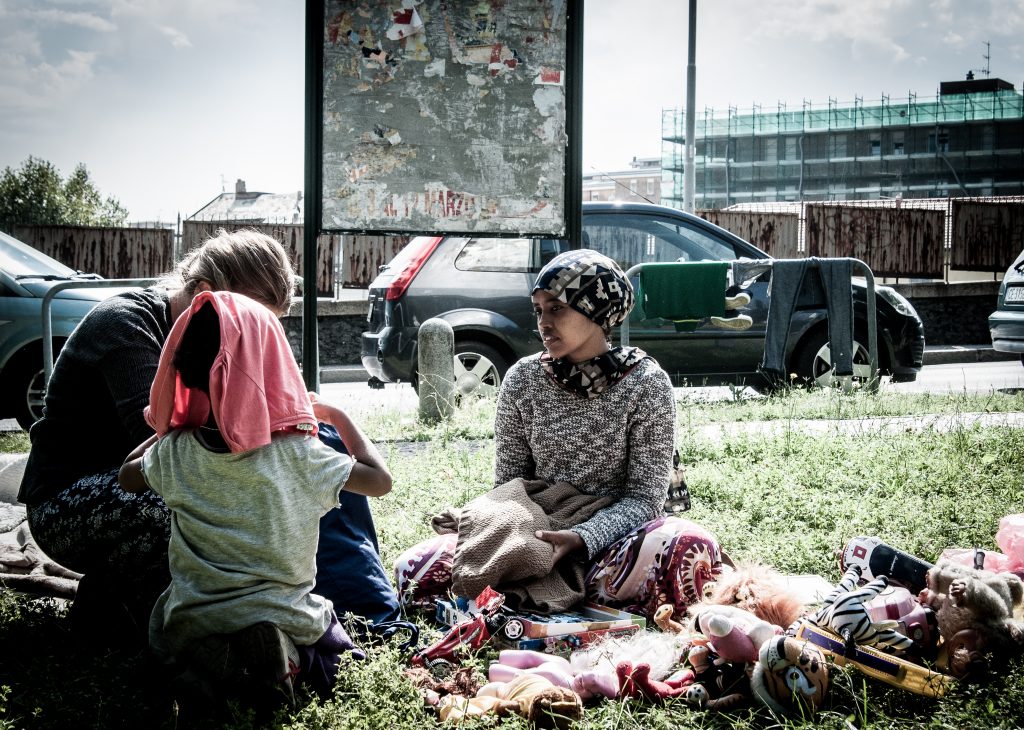 Nobody is left at the station or in the gardens now. The issue seems to be simply shifting, though, as more and more people are being readmitted to Italy and the reception centre is already over capacity.  At the moment, neither the creation of a new centre nor more prefab boxes are currently being discussed as options.  The situation is still evolving.