Homepage >> Approfondimento >> Coronavirus in reception centres, between lack of space and fear of infection

June 5, 2020 - Romina Vinci
In Airuno, the spotlight was turned on roughly three weeks ago, when the guests in a reception centre held a peaceful protest. The straw that broke the camel’s back was the arrival of an ambulance that took one of them to the hospital and the following diagnosis: it was a case of Covid-19. Romina Vinci tells us how the pandemic is managed in dorms of 5, 6 or even 8 people.

The 2-month lockdown has left its mark. For the strict measures adopted, for the individual freedom kneeling down to the collective one. The sacrifices required have been significant. Still, some people have endured the sufferings of the pandemic and its consequences to a greater extent. They are the migrants in the Italian reception facilities, waiting for responses from the territorial commission to their asylum applications. Everything is halted as of today. Expiring residence permits will be valid until August 31st. This country will rise up again with broken bones, but it is still unclear whether there will be a place for migrants as well.

A system brought to its knees by the latest security decrees

The latest security decrees have downsized the Italian reception system to a large extent, to the point that most of the voluntary sector did not take part in the last call for tenders issued by the Prefecture, due to the sharp economic cuts. So, last year on December 31st, many facilities closed down.

This situation also affected the Lecco province. This territory, which stood out on a national level for the widespread reception provided primarily by the Comunità Montane (Mountain Communities), had to cope with the shortage of places. The applications for the last call for tender amounted to only 3, with considerable social ramifications: in January 2020 more than half of those who received assistance left the reception programme.

The Airuno case: a guest positive for Coronavirus

Airuno, a village of just under 30,000 inhabitants 10 km away from Lecco, is home to one of the few reception facilities that are still active in the area. Today it hosts approximately 80 guests of various nationalities. The centre is run by the Medihospes cooperative, managing the Cremeno centre, in Valnassina, with a comparable number of guests.

The spotlight was turned on this centre roughly three weeks ago, when the guests held a peaceful protest. The straw that broke the camel’s back was the arrival of an ambulance that took one of them to the hospital. The swab left no room for doubt: it was a case of Covid-19.

Panic, terror, desolation: finding the right words to describe the atmosphere in the centre is no easy task. “We live in dorms of 5, 6, even 8 people, we’re afraid to infect each other – say some of the guests leading the protest – this is why we asked the Prefecture to transfer us to other centres, and to do the swab test for  everybody.

Yet both requests were rejected.

“No other centres are available, nor can we provide new structures at this stage” Marcella Nicoletti, Head of Cabinet and Adjunct Vice Prefect, explained to the press. Swab wise, well, the response is known: swabs will be performed only in case of overt symptoms. 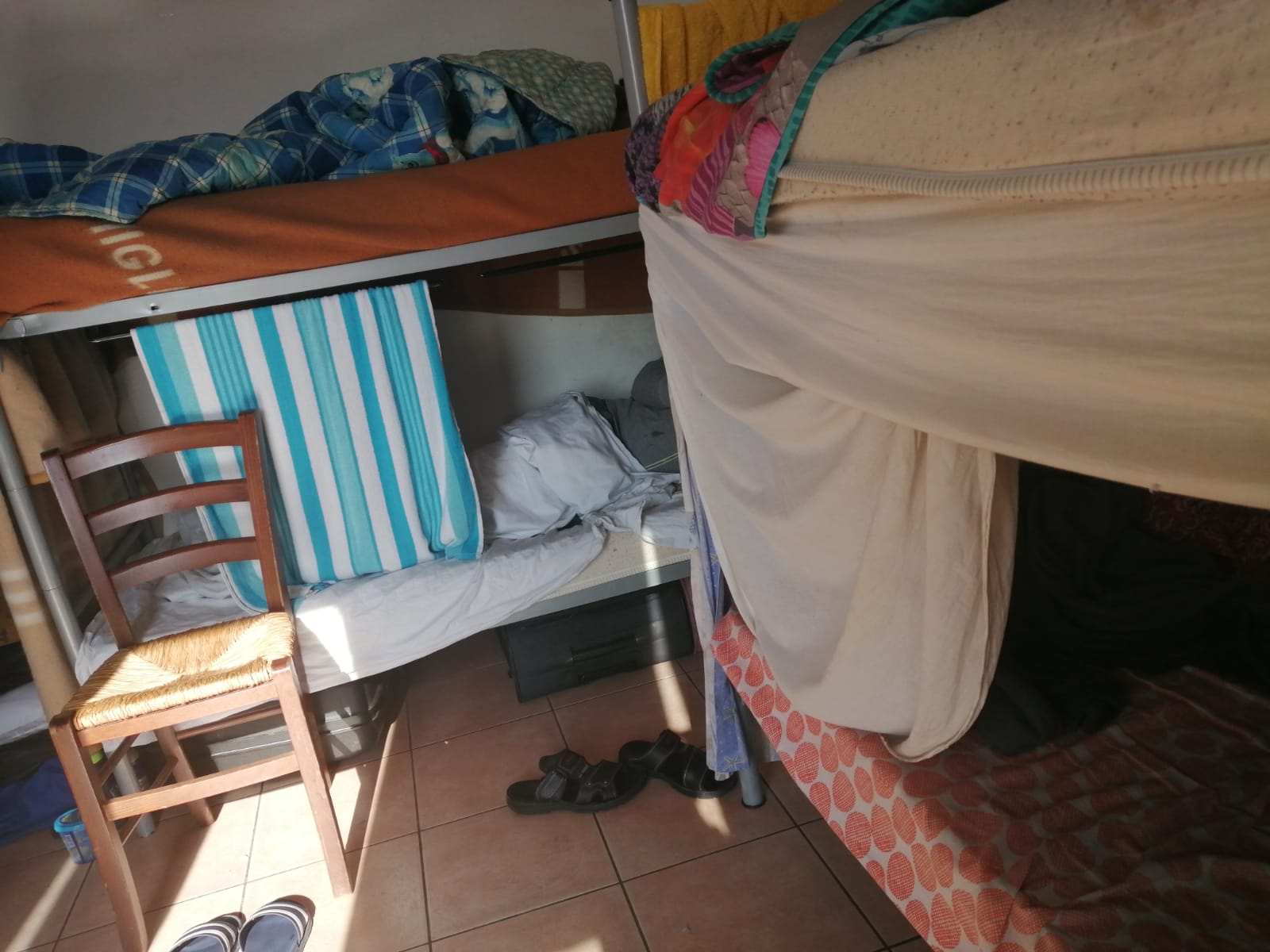 The operations put in place by the centre

However, the protests got hesitant results. Personal protective equipment was provided in the centre. Now protective gloves and masks are available to all. Every morning, guests have their temperatures taken. Those who shared the room with the guest who tested positive were quarantined for 14 days.

“We vetted the premises in our area, and identified, in each of them, the presence of places potentially suitable for quarantine” explains the Prefecture’s spokesperson. The dorm in question made it through the controls, as it is equipped with a separate bathroom and is disinfected three times a day.

“We’re complying with the protocol to the fullest in order to guarantee the security of our guests” explains Giuseppe Ranù, head of Medihospes, the non-profit organization that manages the centre. “We’ve implemented distancing measures in common areas, reduced the seats in the canteen from 60 to 20, increasing the shifts and extending the meals by half an hour. At the very beginning of the emergency, when the Lecco ATS (Health Protection Agency) staff came to make inspections, it was found that through the correct adoption of PPE social distancing could be respected.  The issue – complains Giuseppe Ranù – is that our guests don’t use masks and gloves”.

“They brought us gloves and masks only after our protest, by mid-April, what about before? Why didn’t we receive these supplies earlier?” asks a 23-year old living in the centre. Then he goes on: “They say that masks are compulsory when we are in common areas, but what’s the point? There are 8 of us in a room, we can’t maintain the well-known social distance and we can’t keep wearing the masks even when we sleep”.

On top of that, the guests complain that the areas in the centre were not sufficiently sanitised. And they point the finger at the lack of clarity: “When the guy felt ill, we weren’t warned immediately. We weren’t told it could be Covid-19. We kept playing football all together, with his roommates as well”.

Although living in confinement is tough for all, it is even more difficult in reception centres, where people share their everyday life with others, who in most cases are strangers. When roommates are not friends, but acquaintances with, perhaps, the initial of their second name in common. Often times virtual escape is not even possible. The Wi-fi in the centre only works in the office and in the two connected rooms. The signal does not reach the guests’ rooms and the pocket money they are entitled to on a monthly basis is so low that they can barely afford a data package. All they can do is listen to music or kick a ball around, to make time pass quicker.

“The gate of our centre is closed, the guests can’t get out, unless they have the Prefecture’s authorisation for work purposes” explains Giuseppe Ranù.

Getting permission for leaving is quite complicated. Even more when you can’t count on a work contract. The guests of the centre are living in a precarious situation. The Airuno municipality, similarly to many other Italian municipalities, never granted them residence. It also did not do so also before the Legislative Decree 113/2018 entered into force – the so-called security decree, which as a matter of fact allowed the non-registration in the civil registry.  Nevertheless, not having residence implies no identity card, and without an identity card they cannot have an employment contract. And where bureaucracy is holding things back, the only viable option is undeclared, under-the-table work.

The cases in the province

Three migrants in the facilities of the Lecco province were tested positive for Covid-19. They were taken and treated in hospital; their conditions have never caused concern. Speaking of which, the ATS has made it known that the guest from the Airuno centre is in good health. Yet he will not return to the reception centre for at least two more weeks. “He’s going to stay in one of the post-hospitalisation centres, to be safe as much as possible, explains Marcella Nicoletti. “A possible return to the centre today – she says – could again cause fears and panic amongst the guests of the centre, despite the fact that the course of the disease is evolving in the best way”.

The hostel of solidarity

Meanwhile, in the City of Lecco, another premises that hosted migrants has been transformed, in record time, in a “hostel of solidarity”. We are in the Maggianico neighbourhood, where the Suore di Maria Bambina (Sisters of the Holy Child Mary) operated for a long time, and where the Sacra Famiglia di Milano (Holy Family of Milan Foundation) has been working with refugees over the last few years. Having remained empty since the end of December, last week it was reopened thanks to Caritas Ambrosiana, which created a day and night shelter.  It has 24 beds for the homeless. Three meals a day are guaranteed, and guests are required to stay inside the structure, at least in this emergency phase. Maximum attention is also paid to safety regulations and social distancing: people’s health conditions are tested upon entry, and then constantly monitored by an operator.

Cover image: a room in the centre