Homepage >> Approfondimento >> How many refugees in Italy are women?

February 23, 2016 - Alessandro Lanni
The gender make up of refugee flows depends on the nationality. Nearly a third are women in Europe, 10 percent in Italy. The Syrian case and the record number of Ukrainian women in our country.

Second. Following the news of violent acts in Cologne on December 31st, some have called for restriction of access to lone young male seeking refuge in Europe. These are two aspects of the same issue: the gender makeup of refugees; that is, how many women and how many men have requested asylum in 2015. 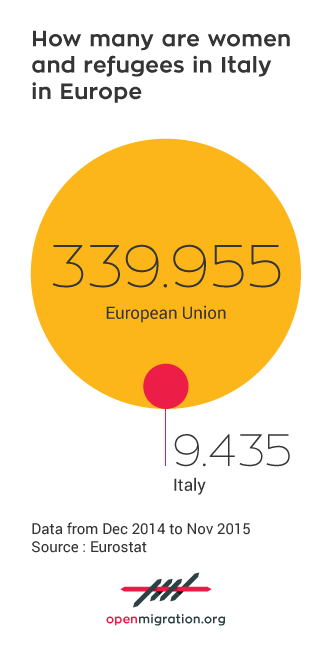 Between December 2014 and November 2015, Eurostat data show, 1.242.155 people applied for asylum in Europe, 339.955 of whom were women: 27 percent of the total refugee population in Europe.
This percentage is considerably lower in Italy. According to data, there were 83.630 formal applications for asylum, as of November 2015, with only 9.435 being submitted from women, which translates to 11 percent.
Of these nearly 10.000 women and girls who arrived in our country over the last twelve months, the majority are Nigerian: 3.915, equal to 21.9 percent of all Nigerian migrants. They are followed by Ukrainian women (2.352), who account for half (49.7 percent) of all the asylum applications by citizens of the Ukraine in Italy.

Among other nationalities, the disproportion between men and women is enormous. Among the Pakistanis who arrived in the last year, males account for 98.6
6 percent (nearly 10.000); males also account for 98.9 percent (8.435) of refugees from Gambia and for 98.3 percent (6395) of those from Senegal. The disparity among refugees from Bangladesh are even more staggering: 6.170 men to 40 women, (0.6 percent).

One interesting case is that of Syria. With the opening of the “Balkan route” and the possibility of passage through Turkey, many Syrians have given up Italy, opting instead to head east in order to reach Germany. Arrivals have dropped from nearly 40.000 in 2014 to less than 10.000 in 2015, and among these only a few have applied for asylum in Italy (480 applications). Yet even this small portion is still representative of the gender makeup of the total population of Syrian refugees.

To get a clearer picture, let us compare the absolute numbers of people who have fled Damascus or Aleppo and reached Italy and Germany. 31 percent of Syrians who arrived in Germany in 2015 are women: 22.915 to 73.620 men. The percentage is 37.5 among those who arrived in our country (that is, 180 Syrian women).
What do these figures in Italy ultimately tell us? That the gender makeup depends on the various nationalities, of course, and especially on the migratory strategies enacted by the citizens of each individual country. Those fleeing the war in Syria bring their whole families along, because everyone is in danger. Those trying to escape military service, like young Eritreans, flee alone, which explains why the majority of migrants are likely to be young males. 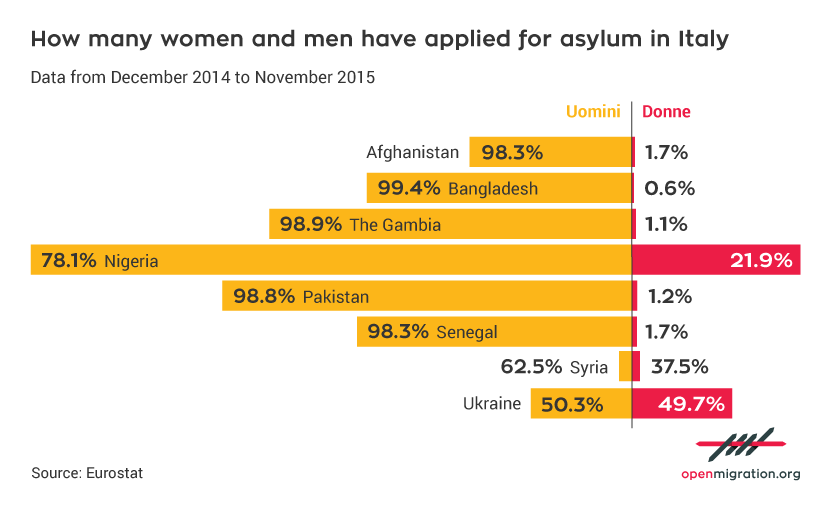