March 6, 2020 - Marianna Karakoulaki
Rumours about a migrant killed near the border; islanders "welcoming" people on a dinghy with insults and violence; thousands of men, women and children gathered at the border while the authorities deploy riot police. With Marianne Karakoulaki we return to Greece, where the events of the last few hours seem to show yet another failure of European migration policies.

Muhammad al-Arab was one of the thousands of people who tried to cross from Turkey to Greece following Turkey’s decision to stop monitoring refugee flows towards Europe. He was allegedly shot dead by someone on the Greek side. While the Greek authorities soon described the event as fake news a video analysis by Forensic Architecture verified the authenticity of the video that was circulating on social media.

“What did we do yesterday? We opened the doors,” Turkey’s  President Recep Tayyip Erdogan declared in late February following the death of Turkish troops in Syria, and vowed that they will not close the doors unless the EU keeps is promises.

President Erdogan was referring to the EU-Turkey Statement; a controversial non-legally binding agreement between the EU and Turkey. The story that has been unfolding at Europe’s external border, however, was a humanitarian disaster boiling for 4 years. In 2016 the EU agreed with Turkey to curve migration flows with the implementation of the EU-Turkey Statement, a swap policy that made Turkey responsible for curving the large numbers of people who tried to reach the EU in order to seek asylum. In return the EU provided funding to Turkey that would help with the management of refugees who currently lived there. The problematic nature of the EU-Turkey Statement, however, was soon unveiled. Even though the number of refugees who reached Greece’s shores decreased remarkably the geographic restriction that was imposed in Greece created unbearable conditions on the islands of first arrivals. 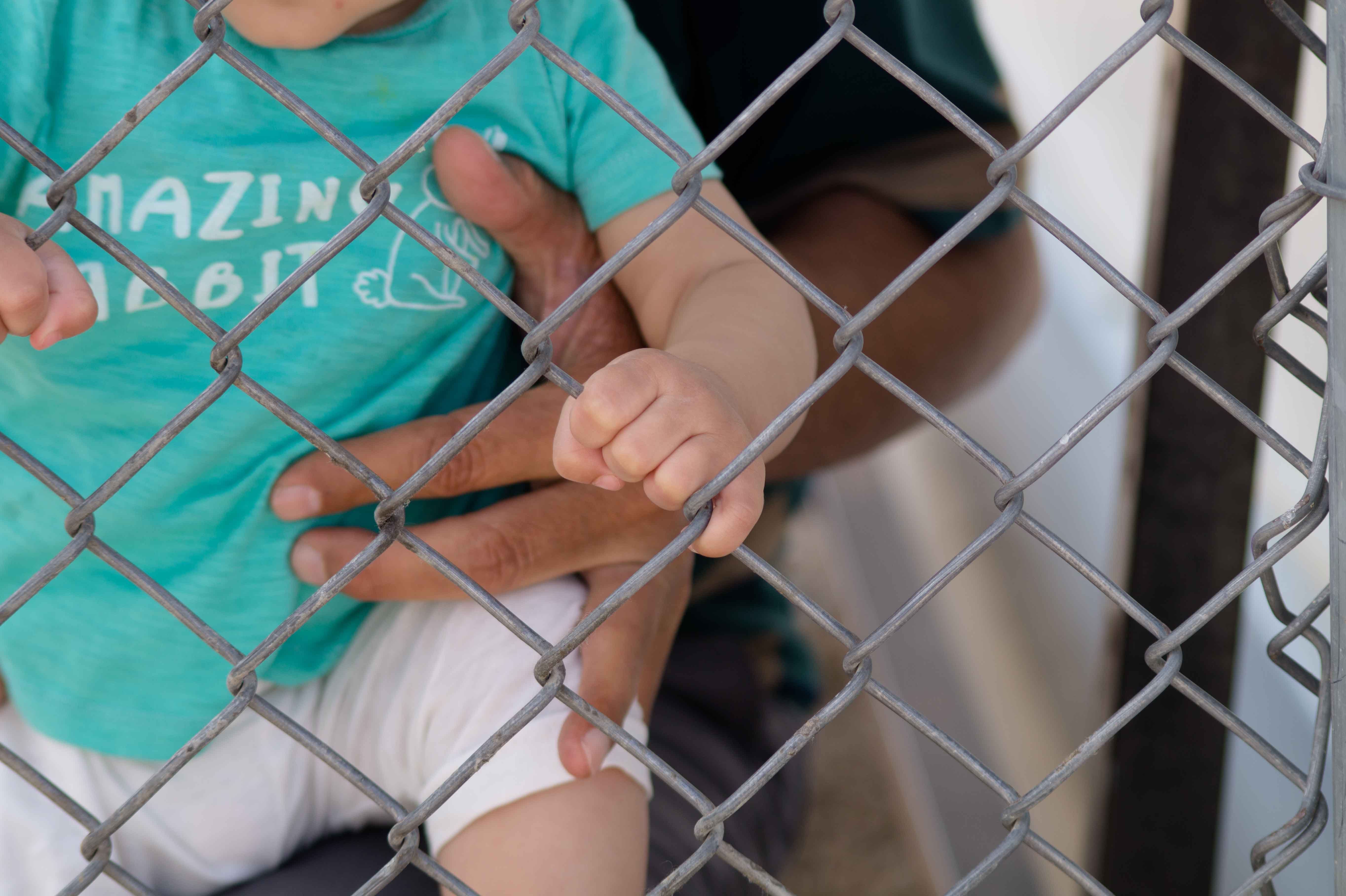 A father holds his baby while locked in the Fylakio hotspot near the Evros River. 1 June 2018. (Photo: Marianna Karakoulaki)

Turkey’s decision to withdraw from the EU-Turkey statement has led thousands of people to head towards the Greek-Turkish borders and attempt perilous sea crossings. Greece’s immediate response was with excessive violence and measures that have been criticised by the international community.

Following the arrival of thousands of people on the Greek-Turkish land border the Greek authorities were in high alert and the government called for a meeting of the Government Council for Foreign Affairs and Defence (KYSEA) which decided the adoption of five urgent measures. More specifically the Greek government decided to: (a) Upgrade security measures at the eastern, land and sea borders of the country by security forces and the armed forces to prevent illegal entry into the country; (b) [t]he temporary suspension, for one month from March, of asylum applications by those entering the country illegally; (c) the immediate return, wherever possible, to the country of origin of those who illegally enter Greek territory without registration; (d) apply to FRONTEX for the development of the RABIT team with the aim of guarding the country’s external borders, which also constitute the European Union’s borders; (d) the immediate notification of this Decision to the Council of Ministers of Foreign Affairs of the European Union and the initiation of the procedure referred to in Article 78 (3) of the Treaty on European Union to take provisional measures in favour of the Hellenic Republic in response to an emergency due to the sudden influx of nationals third countries, in the context of solidarity between Member States of the European Union.

Greece’s urgent plans as well as rhetoric showcase the government’s treatment of the refugee crisis as a national security issue that prioritises the prevention and deterrence of people on the move to seek asylum in the West. The Greek government evoked Article 78(3) of the Treaty on the Functioning of the European Union which refers to border policies as well as the Case of N.D. and N.T. V. Spain in order to justify its decision to suspend new applications for asylum for a month. International organisations and legal experts have criticised this decision and speak violation of international law. The European Council on Refugees and Exiles (ECRE) characterised this measure as a “[m]isinterpretation and manipulation of recent court judgements” that are used to “criminalise people seeking protection”. While the UN’s Refugee Agency (UNHCR) stated in a press release that,

“All States have a right to control their borders and manage irregular movements, but at the same time should refrain from the use of excessive or disproportionate force and maintain systems for handling asylum requests in an orderly manner.” 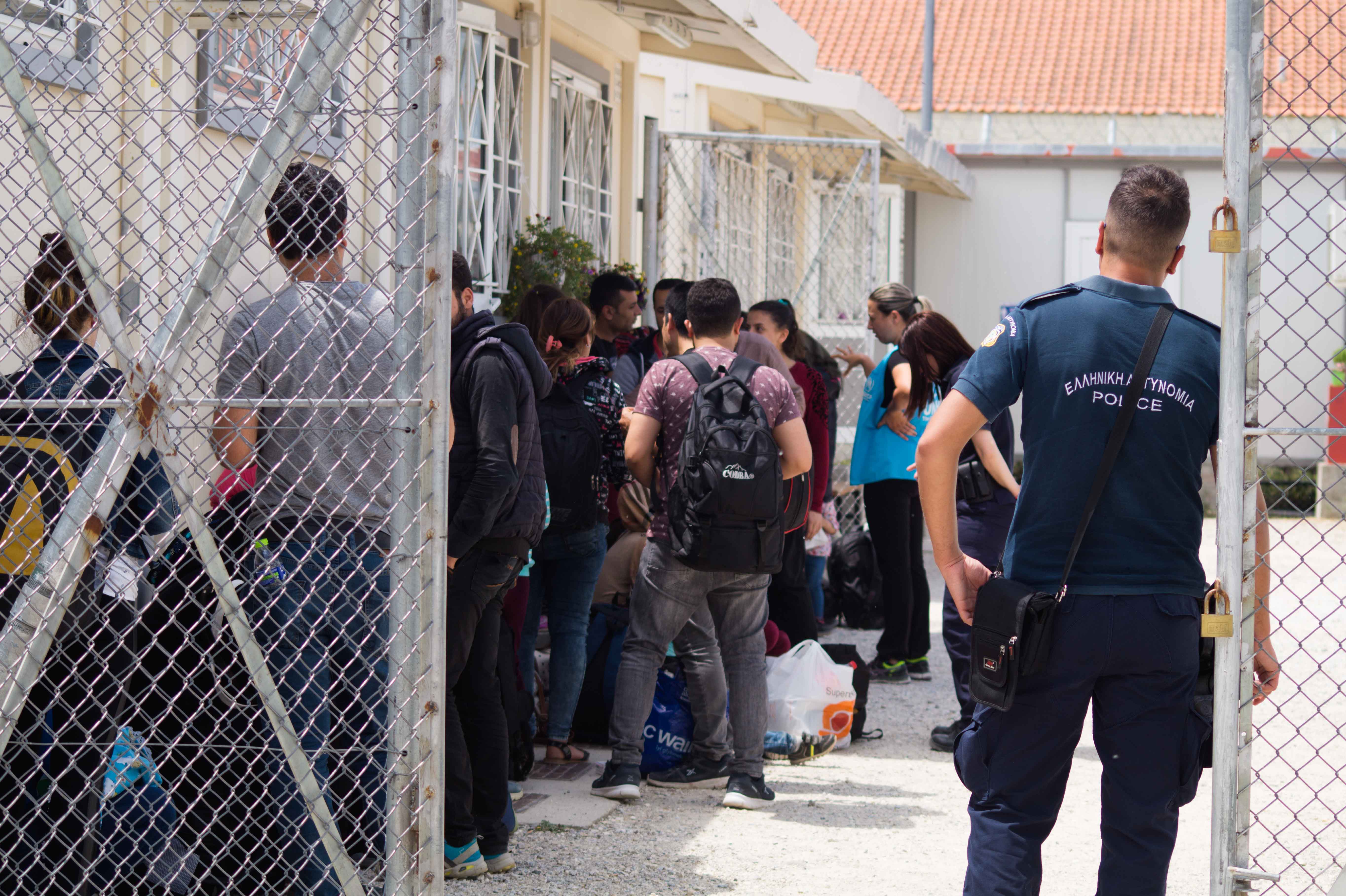 While a geopolitical game is being played in Greece’s mainland border with Turkey people who try to reach the Greece through the islands of the Aegean are greeted with hostility. Locals who seem to be disappointed by the government’s decision to create new camps which will be closed facilities seem to have taken justice in their own hands. A video shared by Ruptly shows locals in Lesbos trying to prevent a boat with refugees that arrived in the shores while shouting derogatory comments towards men, women and children. In addition local mobs set fire to Stage 2, a transit camp in Skala Sikamineas where authorities take refugees after their rescue from the sea. At the same time journalists who are on the island to report on the situation have been attacked and in some cases seriously injured because they were documenting people’s reactions to refugees.  Similar incidents have been reported in other islands as well.

The European Commission’s President Ursula von der Leyen visited the Greek-Turkish border are with the Greek Prime Minister Kyriakos Mitsotakis and four EU leaders in order to have a close look at the events that are unfolding. During a press conference after their visit von der Leyen declared the EU’s support to Greece and called the Greek border the shield of Europe. In addition she announced the provision of €700 million to Greece with additional funding available in order to upgrade border infrastructure. In addition to financial support the EU will provide military personnel through Frontex, the EU’s border agency.

Following the implementation of the EU-Turkey Statement the EU gradually shifted the way it treats migration: from a humanitarian issue to a national and European security issue.  Its insistence on upholding a rather faulty deal as well as collaborating with Turkey which has a track record of human rights violations shows a shift in priorities that stem from a rather right wing agenda of several member states. At the same time the EU seems willing to disregard international law violations as long as its external borders remain intact. Human rights organisations have been reporting illegal pushbacks that take place at Greece’s borders with Turkey for years. In 2018 Human Rights Watch published a report on pushbacks, violence and beatings of refugees who attempted to cross in Greece through the Evros river border and urged the European Commission to act.

During the past couple of days Greece has reportedly shot and pushed back refugees who tried to enter its territory either by land or by sea. The Turkish Coastguard published a video that shows the Greek Coastguard trying to prevent a dinghy from entering its territory. Although such an incident is neither new nor surprising it is striking that it takes place in broad daylight and at the same time there is complete silence from the EU. Such incidents clearly show that the EU’s shift from a Union that embraces the differences and human rights to a Union that is becoming a fortress.

The events that are currently taking place at Europe’s external border cannot be analysed in simple terms as the area that are taking place is complicated for other reasons including the Greek-Turkish relations. However, it seems obvious that Turkey, Greece and the EU are willing to use people as pawns in their geopolitical chess game each for their own benefit. Unless the EU changes its migration policies to their core and starts managing the so called refugee crisis, people on the move who flee from conflict and hardship will continue to suffer.

Cover: A sign on the fence that separates the Greek-Turkish border on the Evros region reads “Be Careful. Border. Greek-Turkish Borders” 30 May 2018. (Photo: Marianna Karakoulaki)