August 10, 2017 - Andrea Quadroni & Michele Luppi
After travelling to Ventimiglia where 12 border deaths were recorded in just a few months, we head back to Como where migrants keep trying to cross the inaccessible border with Switzerland, injuring themselves, or losing their lives on trains, and where both attempts and refoulements have reached substantial numbers.

A grave in the canton of Ticino

The body of Diakite Yoursouf will rest forever in the small cemetery of Balerna, in the canton of Ticino, only a few kilometres away from the Italian border he had crossed on February 27 on the roof of a Tilo, one of the local trains jointly managed by Swiss Federal Railways and the Italian company Trenord. The train, bound for Bellinzona, had left Milano Centrale station at 6:10 p.m. First-aiders found Yoursouf at the station of Balerna, where the train was stopped after some passengers reported hearing strange sounds coming from the roof of one of the coaches. It was already too late for the young man, who died electrocuted. He was killed by a clumsy movement or, more probably, by the different power supply of the Italian and Swiss railways. In fact, there is a specific place near the tunnel from Como to Chiasso where the pantograph used on the Italian network (based on a 3,000V direct current) comes down to receive the Swiss power supply, a 15,000V single-phase alternating current. This change proved fatal.

It remains unclear whether Yoursouf climbed onto the train’s roof at the Como San Giovanni station, which has been one of the hot spots for migration flows along the northern border since last summer. None of the associations and organisations helping migrants in the city declared having encountered him in the previous days. Moreover, Swiss authorities, in accord with the Italian ones, took almost two months to release his personal information. 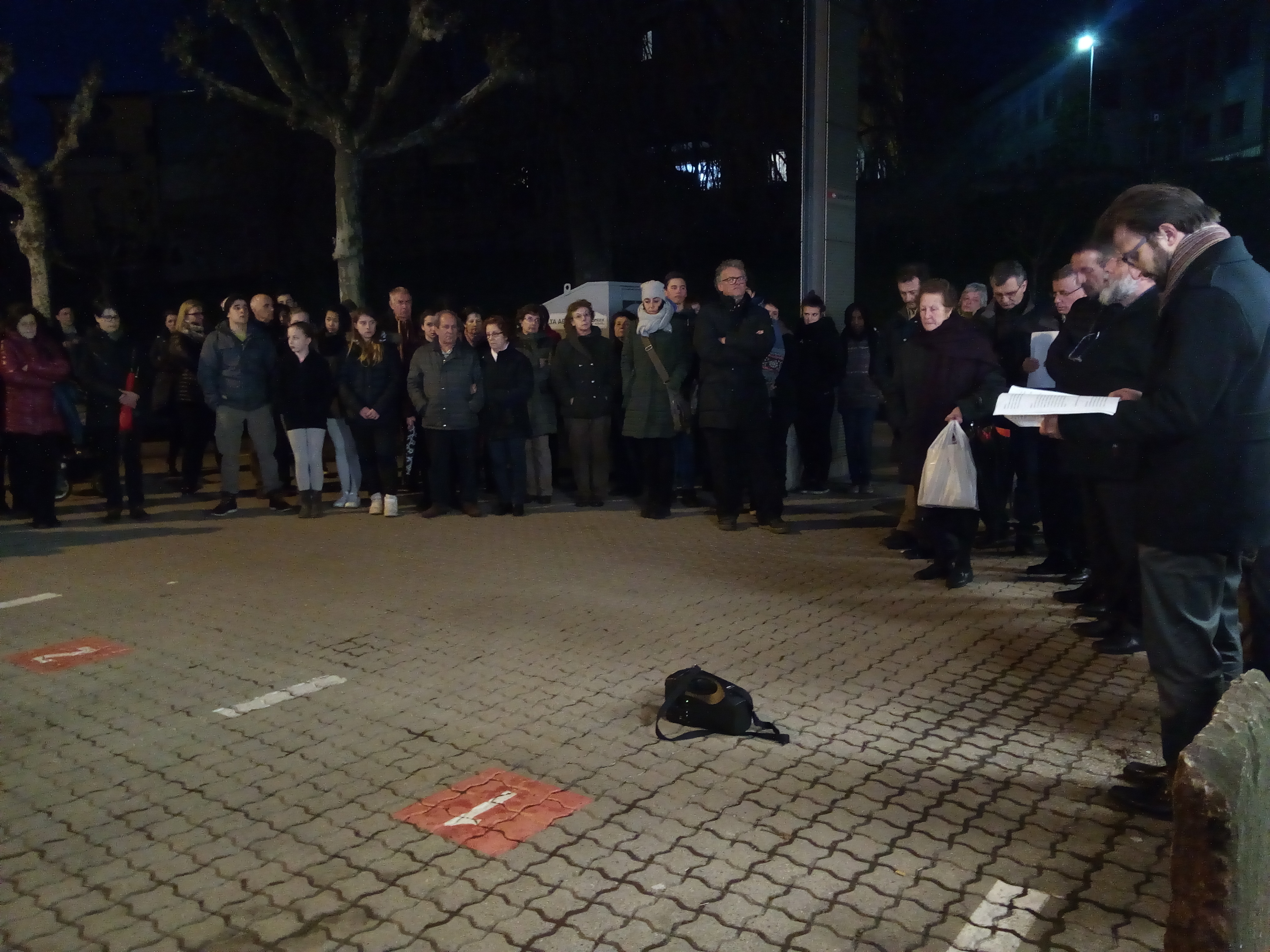 Prayers for Diakite Yoursouf in Balerna, in the canton of Ticino (photo: Michele Luppi)

Some additional details were disclosed by Thiam Amadou Opa, a representative of the Malian Embassy in Geneva. He arrived in Ticino on April 11 with some of the victim’s relatives to attend the funeral ceremony organised by the Municipality of Balerna. Speaking on behalf of the Swiss administration, which had taken on all the costs of the ceremony, vice-mayor Adriano Cattaneo said “We hope that Yoursouf can now rest in peace.”

“We know he wanted to go to Paris where his family was awaiting him,” the African official said, “and the Italian authorities have informed us about his previous attempts to cross the border at Ventimiglia. Yoursouf likely travelled through the desert and across the Mediterranean, just like so many other young men and women leaving Africa to fulfil their dreams in Europe. We do try to warn them against the risks of illegal migration, but the lure is too strong. If we want to stop witnessing such tragedies in the future, countries of origin and of destination must cooperate more effectively.”

Yoursouf’s grave is the only Muslim one in the Catholic cemetery of Balerna, but no one in town seems to mind. Since the day of the tragedy, many have taken steps to make sure that his death will not be forgotten. Moments of prayer and reflection were held in Ticino and nearby Como.

Diakite Yoursouf was the first victim at the Italian-Swiss border since July 2016 when Como found itself at the centre of a significant migration flow towards northern Europe. But on Saturday 18th of March, less than three weeks after Yoursouf’s death, there was another accident: once again, a 22 year-old Cameroonian man was electrocuted while trying to cross the border on the roof of a Tilo train. He received first aid treatment in Chiasso, then he was transferred and hospitalised in Zurich’s burn centre. After several days in the ICU, he was finally out of danger, but his body will carry the marks of this failed attempt forever. The investigation led by public prosecutor Marisa Alfier confirmed that he had climbed onto the train’s roof at the Como San Giovanni station, as reported by an eyewitness to the newspaper La Provincia.

The Cameroonian was identified thanks to his fingerprints because he had already attempted to cross the border several times. Right after the accident, Swiss Federal Railways announced their intention to intensify the monitoring and prevention of border crossings in partnership with Trenord on the Italian side. However, less than two months later, when asked if control measures had been put into practice to prevent further accidents, Swiss Federal Railways peremptorily replied that they were a transportation company and not in charge of migration policies and, therefore, had not applied any specific monitoring. Furthermore, in their opinion, the constant presence of migrants on the trains had yet to cause security issues or service disruptions. Consequently, the only countermeasure against these kind of accidents is spreading information in places with a high concentration of migrants. This is why the observatory on migration WelCom of Como created a graphic in 5 languages to warn those attempting to cross the border of the dangers. “We would like to ask,” they write, “associations and private citizens to distribute it to the migrants and in the places where they usually spend their time, not only in Como, but also along the routes they travel throughout Italy.”

Como’s observatory on migration warning against the danger of border crossing.

Migrants need to know that trying to avoid border controls in such ways can cause serious injuries, if not death. It is useful to repeat that the voltage of the Swiss railways is really high and keeps running even in the middle of the night when trains do not circulate. Furthermore, being even less than a metre away can prove fatal. The current could be discharged in a voltaic arc with the same harmful consequences as direct contact: serious burns, internal wounds, or death.

According to the Swiss authorities, 8,284 border crossing attempts and 6,916 readmissions to Italy were recorded in Ticino during the first six months of 2017. Overall – official data reveal − 5,885 people were arrested, which means that some of them tried more than once. The majority of them were from Guinea, Gambia, Nigeria, Côte d’Ivoire, Somalia, Morocco, and Eritrea.

Data from the first months of 2017 highlight a raise in migration flows in comparison to the same period last year when 7,139 attempts were recorded in the first six months. At the same time, these numbers are significantly lower than those of summer 2016 – especially as regards July (6,139 attempts), August (6,186) and September (4,303)– i.e. the same period in which an informal camp, hosting about five hundred people, was established near the station gardens in Como.

But things in the city have evolved and, unlike Ventimiglia where pressure remains high, today the situation seems relatively calm. The railway yard is closed at night and the police patrol it 24 hours a day; moreover, it is forbidden for migrants to linger in the area.

The temporary reception centre opened by the Prefecture of Como in September 2016 accommodates approximately 300 migrants (the maximum capacity is 380 people), but more than half of them are asylum seekers who arrived here after being rescued at sea and will be relocated to the Extraordinary Reception Centres (CASs) throughout the territory.

In fact, over the last number of months the purpose of the centre has changed. Opened to help clear the station, and therefore accessible to anyone, it is nowadays a hybrid space used to accommodate unaccompanied foreign minors, so-called vulnerable subjects (women and families), and asylum seekers waiting for relocation to the other CASs.

As a consequence, however, migrants who do not meet the requirements to access the official camp have created small settlements in other areas of the city. According to Father Giusto Della Valle, the parish priest of Rebbio who is particularly engaged in the reception of migrants, about one hundred people are living outside the system.

The station of Balerna, in the canton of Ticino (photo: Michele Luppi)

With regard to the Ticino border, the train has been the undisputed protagonist of most crossing attempts over the last number of months: in July 2016 we saw the shocking images of a young Eritrean boy trying to illegally enter Switzerland hidden inside the trolley of a fellow countryman. However, migrants also try to cross the border on foot by walking alongside the motorway, through the woods, or next to the rail ballast.

Since the beginning of summer, several groups of migrants have been reported near the noise barriers of the Swiss A2 motorway. The most recent attempts have also involved bus companies such as FlixBus. Another phenomenon, which is surely not new but this year has been growing more and more significant, is the presence of passatori (smugglers). From January to May, the Border Police identified 33 suspects. Some of them were arrested, others still have pending allegations. If we also count reported cases that have not yet resulted in penal charges, the total number exceeds 60, nine of whom are Italian. After all, and this is one of the tragedies for migrants, considering the huge amount of people who yearn to make the crossing, for these passatori “the game is worth the candle”.

Translation by Lucrezia De Carolis. Proofreading by Alex Booth.
Cover photo: the grave of Diakite Yoursouf in the cemetery of Balerna (photo by Michele Luppi, like all the other photos in this article).