Homepage >> Approfondimento >> The Monday that changed migration in Niger

January 15, 2018 - Giacomo Zandonini
In the first part of his report on Niger for Open Migration, Giacomo Zandonini told us about how life has changed for a former migrant smuggler after the government began to enforce restrictive measures. In the second part, Zandonini braves the dangers of the Sahara along with the migrants and explains how the closing of the Agadez route has pushed the local retail economy into the hands of a criminal system.

“Agadez? Nobody goes there anymore, the route goes through here now, in In-Gall,” Mohammed Aya declares, waving his hands. He is 40 years old, with a hollowed face, and he introduces himself as the president of the bureau des migrants, the representative of the passeurs in this town in the heart of Niger, 70 kilometres from Agadez. Nearby, teenagers wearing t-shirts are diving in the rainwater that has pooled in a riverbed, shouting: Vive Toumast!, long live the home of the Tuareg.

“Agadez is now blocked, so the passengers are coming from Tahoua, Tchintabaraden, Aderbissenat, Abalak,” Aya continues. “They pass through near here, I can’t tell you exactly where, and then on to Algeria or Libya.” Another passeur, Biahou Maidaiji, echoes him: “The department that In-Gall belongs to is as big as Togo anyway, and it shares a border with Mali and Algeria; it’s impossible to control.”

This phrase is repeated in an almost identical fashion throughout other towns in the area, where the timid Sahel green creeps upon the Saharan sands during the wet season. As Yahaya Mohamed, a city councillor in Abalak, explains: “For a while now, after the crackdown at Agadez, human traffickers have been opening new routes, and our town has become a sort of hub.” A little north of Abalak, he continues, “the trails from Mali cross the ones to Algeria, and at night migrants are transferred from one pick-up to the next: there are no controls till the border.”

Systematically enforced since the summer of 2016, the repressive measures taken by the Nigerien government against the passeurs have changed the strategies and the routes in the fluid, complex “travel business” which has transported hundreds of thousands of people from West Africa to Libya and Algeria over the past few years. This has raised concerns among local authorities and, according to many, also endangered the lives of those travelling across the country.

The Monday that changed everything

To understand more, one needs to take the Route Nationale 1 to Agadez, leaving behind the bustling markets of Abalak. The asphalt strip becomes thinner and thinner until there is only sand under the wheels of buses and jeeps. Every day dozens of buses travel the so-called Uranium Highway, which points north past Agadez, to the mining town of Arlit. Until 2016, they were used by all the migrants who came to Agadez to negotiate their passage across the Sahara.

“It happened suddenly, on a Monday in September 2016,” Bachir Amma remembers, still emotional a year later. “In the past, Mondays were a cause for celebration in Agadez… The traders would do business and the migrants would leave in the pick-ups, behind the military convoy that escorted the vehicles every week as far as Dirkou, headed for Libya.” Dozens of Toyota Hilux would roar by on the sands with their cargo of migrants. “But now,” Amma continues, “after several drivers were arrested and many, many cars were seized, Mondays make me sad.”

Today Amma is a full-time coach for the Nassara Football Club of Agadez, which has employed migrants and paid them with the profit from the transports while climbing back up the national league tables. Until 2016, however, his dirt-floor courtyard served as a “ghetto” for those passing through town. Thousands of people have waited within those walls before leaving with the drivers that Amma himself procured for them. 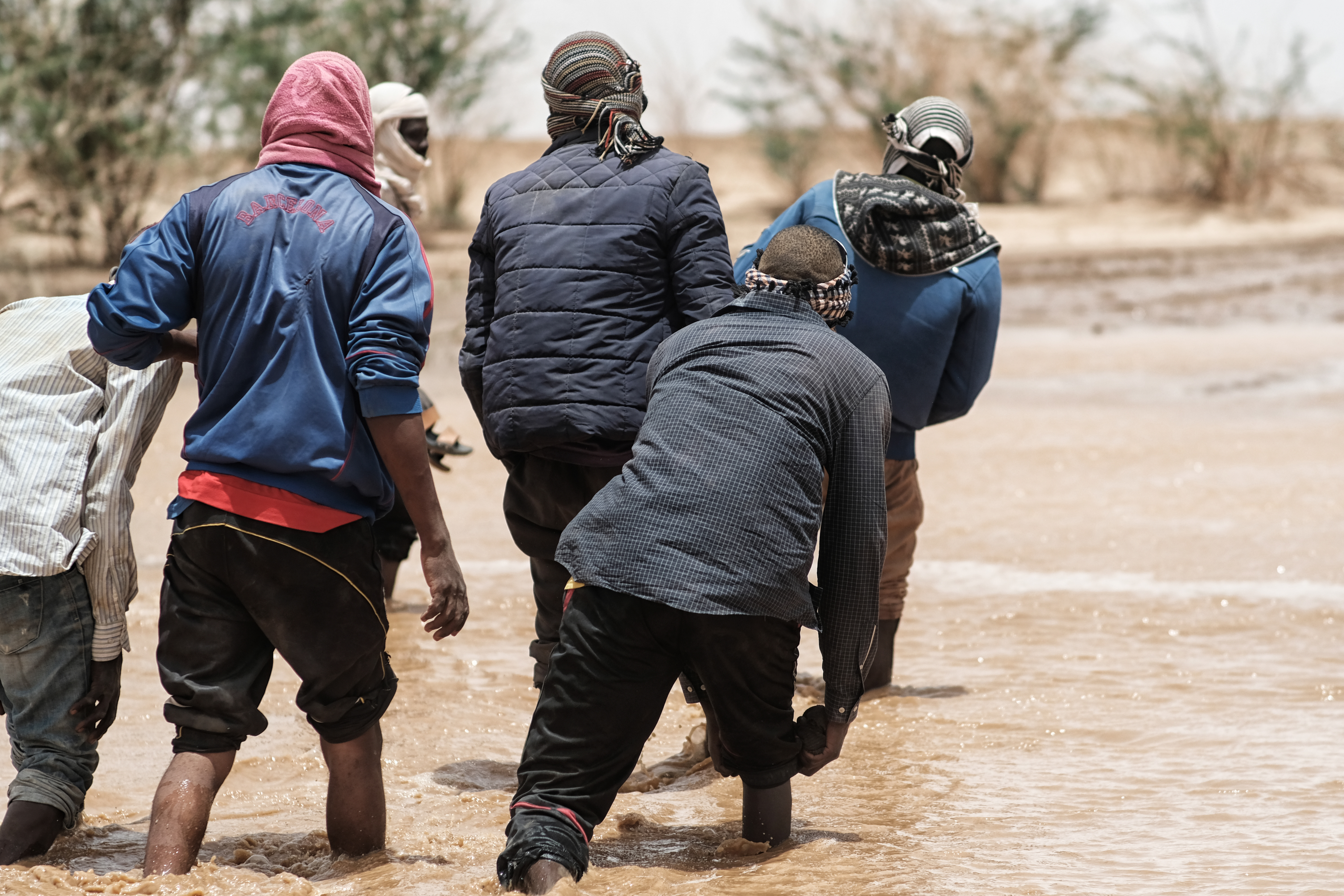 Migrants crossing a river after a storm along the Saharan route to Libya (Image: Giacomo Zandonini)

“After a few of our acquaintances were arrested, along with some of the 2,000 migration workers in Agadez, I decided to quit,” Amma continues. “But the departures haven’t stopped: there’s just fewer of them, or they’re happening elsewhere: migrants today are taken to In-Gall or the Aïr Mountains together with our fellow citizens, or they are brought by foot or motorcycle from Agadez to the nearby villages, which they leave at night.”

Even the ghettos, once located in the city centre, now exist in the suburbs, “or have become distributed: migrants are scattered in the houses of poor families, who are compensated, so that they don’t stand out.” Misrata, one of the westernmost neighbourhoods of Agadez, is a chessboard of bare courtyards that are only separated from the main streets by the walls made of banco, the local red clay. Here, behind identical metal doors, many of the ghettos are still in operation. Ahmed, a driver who asked to remain anonymous, takes us to one of those which supplies him with clients and is managed by a Guinean man. In it, 50 young people, mostly from Senegal and the Gambia, share a 30-square-metre room. The tin roof makes the heat even more unbearable. For many of these migrants, Agadez means this space and a never-ending wait.

The first to come forward is Lamin, a 20-year-old from the Gambia, with a scar over his lip and more scars on his hips from when he was beaten up. “It was a group of armed men in Burkina Faso; they kidnapped and robbed us near the Niger border, and we had to call our families for ransom.” His younger brother, Lamin explains with a frown, could not be set free “because the kidnappers thought the ransom wasn’t high enough for the both of us.” Since escaping to Agadez, he hasn’t heard from him. Now, he says, “I’ll do anything to travel on to Libya and then Italy and report those criminals.”

Less than a hundred metres away from Lamin’s ghetto, Ahmed negotiates for access to another courtyard. “We can’t stay long,” he explains in a hushed tone. The scene here is completely different: hundreds of people are crammed along the walls under makeshift tents to protect them from the sun. In a corner, another tent marks a toilet. Two young women take turns washing, while a third one lathers up her five-year-old daughter with soap, then washes her off with a kettle. All of the people are from Nigeria, and many of them are women. We barely have time to talk to one of them before the manager of the ghetto starts to whip a man with his belt. Ahmed gestures that it’s time to leave. 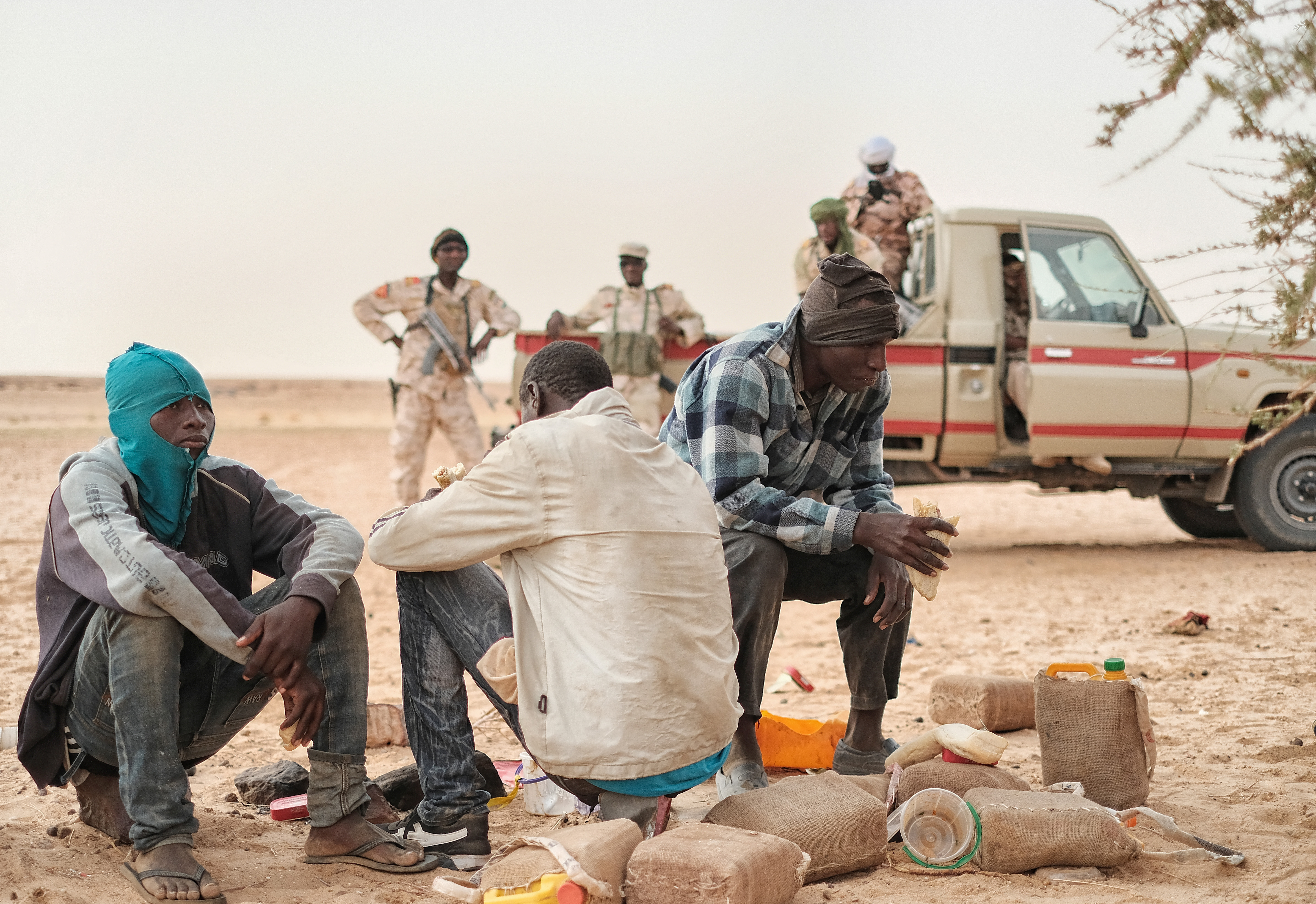 Migrants abandoned in the Sahara are found by a military patrol on the route to Libya (Image: Giacomo Zandonini)

“The enforcement of the law against migration,” Ahmed explains as soon as we get to a relative’s house, “has made the job so much harder.” Drivers like him have ended up in jail, while passeurs from other countries, “Nigeria, Burkina Faso, the Gambia…are becoming more and more powerful, and now have simply left Agadez, falling back to Niamey, or even their countries of origin, and manage their clientele from there through agents.” There is also a new phenomenon, something that had never happened to Ahmed in nearly a decade of working the migration business: “On more than one occasion, I’ve had to pay to get my passengers. 10-15,000 francs each, which forces me to resell them once we get to Sabha, in Libya.”

The EU knows about new routes being opened

That the repressive measures taken by the government have led to changes in the routes is also indicated by an internal EU document of August 2017, obtained by Open Migration, which “confirms that the changes in migrant routes has caused a significant increase in both the prices and the risks connected to border crossing.”

The report in turn cites a document from the Nigerien Ministry of the Interior according to which 101 people were arrested and brought to trial, 66 vehicles seized, 7,681 people sent back to the border, and 1,762 escorted out of the country in the first semester of 2017. In addition, at least 12 international trafficking organisations were taken down, thanks in part to an EU-funded Joint Investigation Team made up of Spanish, French, and Nigerian officers.

Rhissa Feltou, a former rebel fighter who became mayor of Agadez in 2011, is nonetheless very critical of the law on the illicit trafficking of migrants (passed in 2015 but systematically enforced only since September 2016). He views it as “unjust because it disproportionately affected a vital economic sector by limiting free circulation within the Economic Community of West African States, under which all citizens of its 15 member States are free to travel across all of Niger, including north of Agadez.”

Enforcement of the law, according to Feltou, has led to a shift “from a retail economy system to a criminal system because today only those who have the funds and the connections can continue to transport migrants, and thereby become involved with the drug trade in the region.” This criticism was shared by Nana Ekoye, who manages the Agadez office of the NGO Alternatives Espaces Citoyens, founded by a group of journalists. According to Ekoye, who has organised meetings on migration in several of the city’s neighbourhoods for years, “the law, which is supposed to protect migrants, has actually fostered a system of trafficking.”

“What’s happening today is that migrants are being locked inside the ghettos while middlemen withdraw the money that migrants’ families have sent: up to 500 thousand francs [760 euros] for a trip to Libya, which used to cost about half as much,” she adds. With the military patrolling the main routes to the Libyan border, “there are more and more cases of migrants being abandoned in the Sahara by drivers who fear going to jail.” The International Organization for Migration has recorded about 150 migrant deaths in the desert for 2017, but as the EU internal report stated, “the number of migrants who died during the crossing could be much higher.”

Departures from Agadez are becoming increasingly secretive, “at 2 or 3 a.m., headlights off, with a series of sentinels along the route”, Ahmed says, “but if you have the right connections, you can still see them.” Days pass, however, and there are constant delays. “We’re leaving tomorrow, there’s too many police around,” he explains. His informer is “someone in the military at Séguedine, up north, who has contacts in Agadez.” News of pickups being stopped as soon as they leave town has spread among the ghettos, barracks, and offices, as have descriptions of a kind of hide-and-seek between the passeurs who are still in business and law enforcement agents. A challenge that goes on along the trails to Libya and Algeria, where the lives of migrants in transit are at stake.

Cover image: Sow Ammar, a Guinean migrant, assisting a young Nigerian woman who has become dehydrated after days in the Sahara (All images and the video in this article by Giacomo Zandonini)

Note: This article was edited to fix a typo.