Homepage >> Approfondimento >> The story of Peter, the asylum seeker who never gave up

January 24, 2019 - Tiziana Cauli
Twenty years spent fleeing sectarian violence in his country, followed by imprisonment and torture in Libya. A dangerous crossing on a rubber boat, where he was able to rescue his travel mates thanks to his engineering expertise. A troubled landing in Italy, where he was imprisoned again on ignominious charges of human trafficking. Tiziana Cauli tells us the story of Peter Ositandinma, one of the first beneficiaries of the European Qualifications Passport for Refugees, and now a student of engineering at the University of Cagliari.

It is a warm and sunny Saturday morning, a familiar one in late-autumn Cagliari, where Peter Ositandinma has lived for three years while awaiting a decision on his asylum applications. The 26-year-old Nigerian will spend yet another weekend poring over books, as he has for a month since the University of Cagliari admitted him to its computer engineering programme.

“It is a privilege,” he says, gazing out to the sea from the library entrance on top of a hill in Monte Claro park. “If I had given up, I would have drowned like all the refugees on that rubber boat, but I found the courage to rescue their lives as well as my own. And look where I am now!”

The courage to save those lives actually came at a high price for Peter: a six-month jail sentence in the Sardinian prison of Uta, from which he was released only after four appearances before a judge. The first time, he was too intimidated to speak. He had landed only a few days earlier, but had spent all his time in the hospital because of a gunshot wound to his leg that he had stitched himself in Zawara, Libya, before embarking on his journey. He had used a safety pin as a needle, with a cotton thread from the seam of his t-shirt. He’d been shot at by smugglers, and he didn’t know how else to seal the wound with the bullet still lodged in his flesh.

“My leg hurt like hell once we were left alone at sea, after the passeur got on another boat,” he recalls. “The engine broke down soon after and we were desperate, because none of us knew the first thing about sailing and you better believe none of us knew how to swim.” There were a few pregnant women, too. The same women, now mothers, would appear before the judge to testify that Peter was not a smuggler, but indeed the hero who had rescued them from certain death.

“It took me five hours to figure out how to get that engine started – five hours! And the pain was killing me. The others kept telling me to give up, but what other options did we have? I studied electronic engineering in Nigeria, and I tried to apply that knowledge.” At last he was able to get the engine going and the rubber boat sailed again towards the sun, which Peter reckoned was the right direction to reach Europe.

With the rubber boat now almost deflated, only the third vessel they met responded to their cries for help. Once they were rescued, Peter and the other passengers were taken to the port of Cagliari. “I spent three days in a hospital, and then they took me back to the migrant centre.” In the CAS (Extraordinary Reception Centre) of Villacidro, a small town in the province of Medio Campidano, police officers were waiting for him.

“They told me to collect my things!” Peter cannot help laughing. “I told them: what things? I didn’t have a thing. Just the jeans I’d got from the Red Cross when I landed and a bar of soap to wash myself. They told me to put everything in my backpack. I didn’t have one, so they gave me a plastic bag.”

A life on the run

Even in jail, Peter continued to receive medical treatment. Three years on, his scars are still clearly visible. His leg had already been injured before his journey to Libya via Niger. He was working in Maiduguri, the capital of troubled Borno state, when he was caught in an attack by the Islamic terrorist group Boko Haram. At that time the terrorists were kidnapping girls and young women, who did not raise any suspicions and were therefore easier to send out to blow up markets with explosives strapped under their clothes. Peter’s uncle took him to the hospital in Potiskum, in neighbouring Yobe state, but even there a kamikaze attack forced them to flee. As the son of a Christian Igbo man from the east who had died when Peter was only 1 year old, he was terrified. 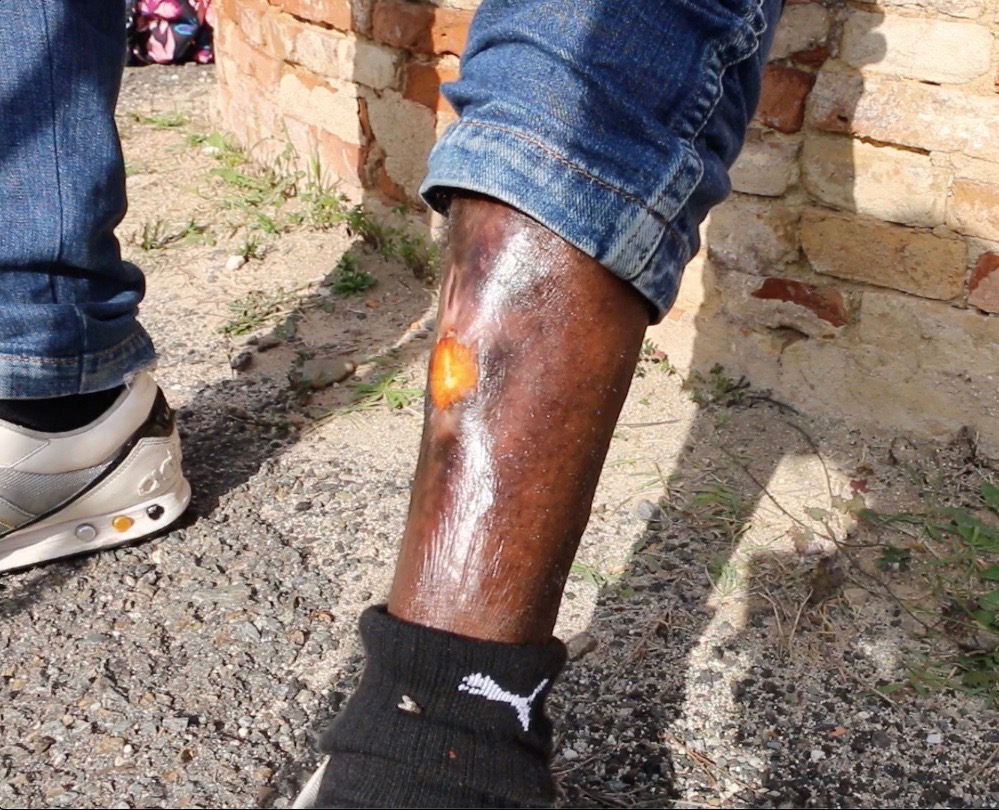 The scars on Peter’s body: he was injured during an attack by Boko Haram, then shot in the same leg by Libyan traffickers.

“Belonging to the Igbo people in Nigeria is terrible,” he explains. “At a certain point it became too much. First, we were attacked with guns, knives, and arrows. Then it was bombs.”

After fleeing Potiskum, Peter found shelter in Sokoto, in the north-west. There he sought to treat his wounds as well as he could and regain his strength before crossing the border into Niger. “In Sokoto, I almost became tired of living. It was too much. But then I found the strength to escape.”

Nigeria is not a country at war, making it difficult and not at all frequent for refugees like Peter to be eligible for humanitarian protection in Europe. Yet his tale, as well as those of many fellow Nigerians, is rife with violence, death, and terror. Peter does not even remember his father’s face; he was a former member of the military who had fought in the civil war and then settled in the north, starting a business as a baker and marrying a Muslim woman from Cameroon. The conflict had left the region devastated, and reconstruction efforts afforded more job opportunities than elsewhere. The family of Peter’s mother, however, did not take well to their daughter’s marriage to a Christian man.

“My mother died when I was five years old, yet I remember spending so much time running. They attacked us, killing people, destroying our homes and our properties.”

As soon as he graduated, Peter decided to enrol in the University of Enugu, in the south, where the Igbo were a majority. His father was from that region, the former Biafra, where secession had culminated in a bloody civil war which had lasted until 1970.

Peter’s main sources of income, however, were in the north. So he would alternate between Maiduguri and Potiskum, studying and working. It was during one of those working spells that he was injured in one of several terrorist attacks.

“You hear about Boko Haram,” he says. “But this is pretty recent. Before Boko Haram, there were other terrorist groups. It’s always been like that in those places.”

Twenty years spent fleeing sectarian violence in his home country, followed by imprisonment and torture in Libya, meant that Peter had no idea what it meant to live safely and peacefully until he arrived in Italy.

“When they put me in jail here, I felt safe for the first time in my life,” he recalls. “I got to drink milk every morning and eat meals every day. I couldn’t believe it.”

They told him he was facing up to 15 years in jail, but he didn’t care. “They thought they could frighten me; they didn’t understand how lucky I counted myself to be able to live that long!”

While in jail, Peter asked for books to study Italian. After a few months, he was already able to communicate with the other inmates. He still finds it hard to believe that the prison had a library, TV sets, and a soccer pitch.

Prison as he knew it was a very different reality. In Libya he had settled in Ghadames, where he was able to find employment as an electrician, until armed conflicts forced him to seek refuge in Tripoli. There he was robbed and imprisoned, and his friends were murdered in front of his eyes.
“For those people, it’s business,” he says. “They take us black people, lock us up, and force us to call our family for ransom. If no one pays, you get killed.” Sometimes, once the ransom was paid, the jailers would come and call out the prisoner’s name. If no one replied, someone else would come forward. Other times, when prisoners were doing forced labour, someone would manage to escape. As did Peter, who fled to Zawara with a group of fellow Nigerians.

“From there, we wanted to go home, but those who’d left were never heard from again. No doubt they all died in the desert, and we were afraid of ending up just like them.”

So they were kidnapped again. Many did not survive imprisonment. “We were tortured. They burnt our skin with lighters and hot plastic. Sometimes they’d come in with a gun, point it at someone, and blow their brains out. They told us: you’ve got to go to Italy! You’ve got to pay! One day they put me on a rubber boat even though I hadn’t paid anything. I couldn’t understand what was going on.”

Peter spent two years in Libya, the worst years of his life.

Dreaming of a normal life

Peter remembers how his attorney covered his eyes every time he and another migrant detained in Uta (whose buttocks were all but flayed) showed him their wounds.

The judge who ordered his release said something that Peter still remembers well: “He said, ‘I don’t speak English, but I can say one thing: you are not convicted.’ Everybody laughed.”

Three months after his release, Peter passed an Italian language exam, which allowed him to enrol in the third year of middle school. Then he began to take evening classes at a vocational school. “That was where one of the teachers told me about the validation of my Nigerian qualifications, so that I could be admitted to a European university.”

Peter was one of 12 asylum seekers to obtain the European Qualifications Passport for Refugees in July of last year, the first of their kind in Italy.

It was a dream come true for Peter, after finally moving in with his girlfriend, a young woman his age from Ukraine, who is teaching art to children. “She loved me for who I was from day one,” he says. “And I want to marry her as soon as I am allowed.”

For now, he is hoping for a positive decision on his asylum application, and occasionally works as a cultural mediator in a court.

“For the first judge who ruled on my case,” he says, smiling. “Even he keeps asking me: so, have you got your papers yet?”

Cover image: Peter Ositandinma, 26, a computer engineering student at the University of Cagliari. He is among the first asylum seekers to obtain a permit to study in Europe (all images in this article by Tiziana Cauli)