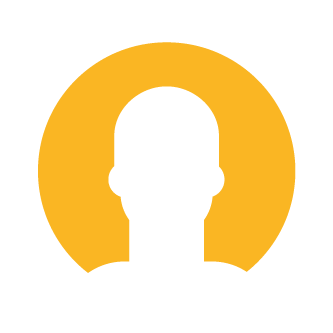 Jose Arce, Julia Suárez-Krabbe, Annika Lindberg
The authors worked with the organisation Freedom of Movements in Copenhagen at a report called "Stop Killing Us Slowly: A Research Report on the Motivation Enhancement Measures and Criminalization of Rejected Asylum Seekers in Denmark" - the product of a collaboration among researchers, activists and rejected asylum seekers.

March 2, 2018 - Jose Arce, Julia Suárez-Krabbe, Annika Lindberg
As activists, scholars, artists and people generally invested in migration struggles, it is crucial not only to document and analyse the complexities and inhumanity of the border regime, but also to document and support the ways in which people resist and mobilise against it.

“We don’t know how long we will stay here. They don’t care if we die here. But do they really think I came all this way to sit on my ass and eat, get money, do nothing? No. I’d leave if I could, but I have nowhere to go.”

Facing this situation, H. and 26 of his fellow residents of the semi-open “departure center Kærshovedgård”, in Western Denmark, began their hunger strike on October 11th, 2017. Their action was the latest in a series of self-organised protests among asylum-seekers in Denmark against their criminalisation, stigmatisation and banishment. As rejected asylum-seekers who for different reasons remain undeportable, they have become the centre of a series of repressive government policies, aiming to make to “make their life intolerable”, in the words of the Minister of immigration, integration and housing, Inger Støjberg.

In 2013, the Danish government inaugurated two new semi-open “departure centres”, Sjælsmark and Kærshovedgård, in order to accommodate and put pressure on rejected asylum-seekers, people marked as foreign national offenders, and individuals on so-called “tolerated stay” to leave the country. The low standard of the centres, their peripheral location, and the withdrawal of economic support are supposed to make residents leave Denmark “voluntarily”. Denmark thereby follows a European trend where states have renewed their efforts to prevent the arrival and stay of undesired migrants. The trend extends to countries in North and Sub-Saharan Africa, including Libya, Sudan, Mali, Mauritania and Morocco, where deportations and extra-territorial detention camps are central to Europe’s externalisation of migration control. Those asylum-seekers who already find themselves in Europe are subjected to deterrence policies, designed to “motivate” undesired migrants to leave, of which forced residency in deportation centres is one.

However, the Danish deportation centres have not fulfilled their declared political function: as of November 2017, only four or five of the residents of deportation centre Kærshovedgård were reported to have returned to their countries of origin, while an unknown number was forced into illegality before or after having been placed in the centre. Instead, they have resulted in the collective criminalisation of rejected asylum-seekers and confined them in a limbo position with extremely limited rights, where they might remain indefinitely. The same effects have been observed in other countries where similar models have been used to promote deportations, but where the observable effects have been deteriorating conditions for rejected asylum-seekers and an increasing number of individuals forced into illegality. Many of the long-term residents of these camps are citizens of states with which Danish authorities lack readmission agreements, and can therefore not be forcibly deported. Their monthly meetings with the police, where they are supposed to be “motivated” to leave, are therefore best described as absurd rituals of mutual rejection.

From the perspective of those confined there, the centres are another instance of legally-sanctioned state violence, which confirms their rightlessness. Recalling Giorgio Agamben, the residents of the camps are “outlaws by definition”, reduced to a condition of bare life in which they are denied political representation and legal protection.

The hunger strike must be seen in light of this condition, whereby protesters refused their marginalization and demonstrated the direct effect of these policies on their own bodies. Stuck in a legal grey zone, neither detained nor free, and without prospects of pursuing a future life in Denmark or elsewhere, the protesters highlighted the adverse consequences of the highly symbolic, ineffective and structurally violent exhaustion strategy they are subjected to. The rightlessness of rejected asylum seekers is a result of the state’s strategy to make use of the tools of criminal justice, including its institutions, legal frameworks, and uniformed staff, to punish and expel migrants, thus effectively opening up legal grey zones. Among these is the fact that in juridical terms, residents of deportation centres are not detained, and residents therefore cannot appeal their having being transferred there.

In practice, this has been debated and contested. Indeed, the camps are run by the Danish Prison and Probation Service, and they are located in former prisons or military facilities. Yet while Danish prisons serve not only to punish but also to “rehabilitate” prisoners for their “re-adoption” into society after serving their sentence, the main purpose of deportation camps is to “punish and expel”, and facilitate deportations of undesired others to their presumed countries of origin. It is telling that hunger strikers testify to being treated like criminals, while having less rights than prisoners.

Residents of deportation centres are also in constant risk of being charged with “criminal” indictments. For example, the biometric control system enables the immigration service to register residents’ movements in and out of the centre, and failure to regularly register and be present can generate a prison sentence of up to one and half years. The unclear juridical status of the deportation camps makes it very difficult for the rejected asylum seekers to protest and demand that their rights are respected: as they are not prisoners in juridical terms, they are hypothetically “free to leave” at any time. 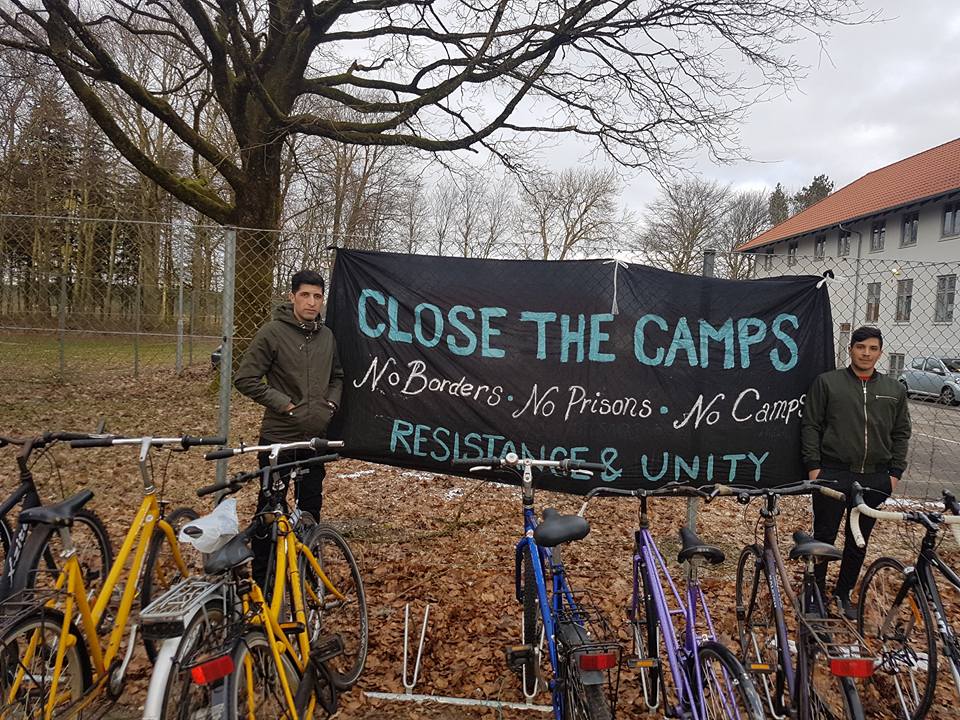 A banner outside Kærshovedgård deportation camp in Denmark.

The “mysterious” configuration of the deportation centres, somewhere between de facto indefinite confinement and expulsion, reflects the Danish state’s use of legal grey zones, which serves two interrelated ends: on the one hand, it enables the state to denounce responsibility for the rights and well-being of those who remain “undeportable” (as they are “free to leave” the centres). On the other hand, it supports and legitimizes the application of violence and punishment, especially when people in the camps speak and act against their situation and challenge the practices of state- or state-allocated officials.

Instead of carrying the costs attached to the legal and administrative handling of rejected asylum seekers, the Danish state is choosing a strategy not of physical deportation, but of physical and legal disappearance: rejected asylum seekers are unwanted, and the aims seems to be producing their disappearance as physical death (as in the growing suicide rate or in the Danish authorities’ indifference to the hunger strike), as psychological death (daily indifference and enforcement of making their lives intolerable), as civil death (charging them with “crimes”, applying violence and punishment as reprisals) and as legal death (as in going underground, or by fleeing to another country and start the asylum process all over again).

The criminalisation of asylum-seekers in Denmark frames their mobility and their continued presence in Denmark as a problem of crime, public order, and security, rather than an expression of freedom of movement, human rights, and self-determination. However, it does not remain unchallenged. As activists, scholars, artists and people generally invested in migration struggles, it is therefore crucial not only to document and analyse the complexities and inhumanity of the border regime, but also to document and support the ways in which people resist and mobilise against it. It includes highlighting their analysis of the problems they face and the kind of visions of a different society that emerge from those struggles.

The hunger strike of October 2017 was only the latest in a series of self-organised protests staged by rejected asylum-seekers to challenge this condition, in Denmark and elsewhere. Throughout the years, protesters have highlighted the structural deficiencies and lethal effects of the Danish and European border regime, including how systemic flaws in asylum procedures, the dysfunctions of the Dublin Regulation, and the criminalising strategies of Danish policies effectively makes them “stuck” in a legal and social no man’s land. For instance, rejected asylum seekers staged a hunger strike in 2012, ending with Out of the Camps, a march that mobilized well over 2,000 people. As a result of state repression, deportations and disillusionments, the following years migration struggles diminished until the last months of 2015 and throughout the spring of 2016. In this context, residents of Sjælsmark deportation centre led a movement that stressed how their dehumanisation (“Stop Killing Us Slowly!”) is structurally produced through law, with consequences for their wellbeing.

The material consequences of “making life intolerable” should be not be underestimated: people often end up incarcerated for months, even years, criminalised and deprived of the right to have rights. Associating rejected asylum seekers and other undesired populations with images of threat, criminality and danger they pose to society, justifies further repressive and violent measures that take the form not only of coercive action but also “violent inaction” and denouncement of responsibility for their “slow death”. Criminalisation is instrumental for justifying why certain people need to be the targets of state violence and abandonment. Because the law is presumed to be both ethical and irreproachable, and compliance with law determines whether a person is moral or immoral, it is impossible for people categorised as illegal/rejected to represent themselves as moral and deserving. What is more, the deportation centres, where residents are labelled as “outlawed”, testify to the fact that the principles and values that have been posited as fundamental to the legitimacy of so-called democratic societies – fairness, due process, and equal treatment – apply only to the few conceived as “members” at the expense of “others”.

There is a sense of dark irony to the fact that deportation camps seem only to generate a trap of indefinite physical and legal “stuckedness”, given that the justification for such a system is to facilitate mobility through deportations. Yet the protests staged by these people, including marches, hunger strikes, and means of everyday resistance testify both to their resilience and to the possibility of alternative ways forward. Their struggles remind us that the mobility categorised as “undesired” and criminal by the state can and should be imagined differently: namely, as an expression of rights, autonomy and of a political agency. In doing so, they also formulate the possibility for new rights to emerge: struggles for the rights of migrants and refugees provide powerful grounds from where to envision political projects for life-affirming social change.