February 18, 2016 - Alessandro Lanni
A third of all refugees in Europe arriving in Europe in 2015 are less than 18 years old. More than a tenth are children. More than 7000 asylum requests in Italy are from minors.

Nearly 400.000 minors have requested asylum in Europe in 2015, according to the definitive data recently published by Eurostat. Nearly a third of the refugees arriving in EU countries (plus Norway, Switzerland and Iceland) are children and teenagers.

There were 54.000 asylum seekers in 2008; this number has now increased more than sevenfold because of the different nature of refugee flows. While until a few years ago most of the refugees were young adult males, the onset of war in Syria has forced entire families to move north, thus changing the demographic makeup of the refugee population. Between January and December 2015, more than 377.000 Syrian citizens have sought asylum in Europe. Specifically, 82.515 refugees were Syrian children younger than 14 (32.000 in Germany only), while 27.335 were teenagers between the age of 14 and 17. That means minors make up about a quarter of the Syrian exodus.

As far as unaccompanied minors unconcerned, Eurostat data (inevitably a conservative estimate) indicate a trend. The number of so-called URM (Unaccompanied Refuge Minors) who have sought asylum in Europe has doubled in less than ten years: from 13.000 in 2008 to nearly 25.000 (24.865) in 2014. This number is likely to be even greater for 2015.

Save The Children estimates 26.000 unaccompanied minors arrived in 2015, but this also seems like a conservative estimate for at least two reasons. Like adults, not all minors arriving in Italy are processed by the authorities, but try to circumvent the registration procedures in the country of arrival set up by the Dublin Regulation. Secondly, many young refugees lie about their age in the attempt to bypass the stricter (but also safer) procedures of reception for minors. 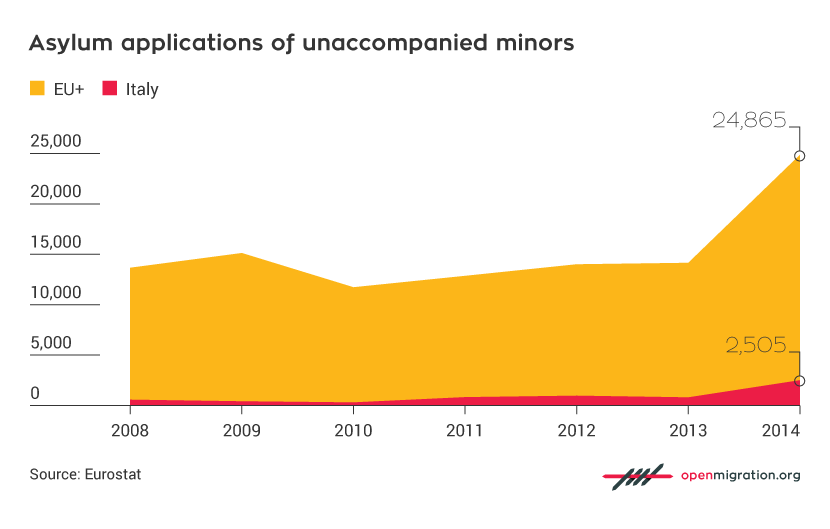 The issue of refugee children became tragically evident early in September last year with the photograph of young Alan Kurdi, the Syrian boy whose lifeless body was found on the shores of a Greek island. After the collective mourning, the deaths, the lonely migrant children, the families torn apart are still a reality, even without the media coverage.

10.000 unaccompanied minors have disappeared after arriving in Europe in 2015, Europol announced in late January. According to the EU’s intelligence agency, 5000 children have gone missing in Italy alone, and are feared to have fallen into the hands of criminal organizations or to have suffered an even worse fate.

IT was also reported early in February that thousands of unaccompanied children seeking asylum have been deported from Great Britain. 2018 Afghan and 657 Iraqi minors have been returned to their countries since 2007. It should be noted that Afghan and Iraqi asylum seekers have very high recognition rates, between 70 and 80 percent.