October 23, 2018 - Daniela Sala
Around 20,000 Syrians work in Jordanian fields for 1 dinar an hour (about 1.20 euros). Their working conditions are often unsustainable and it is easy to get sick, especially for children, like many of these labourers are. Despite the Jordan Compact, only a few Syrian migrants have obtained a work permit, while others constantly risk not being paid. Daniela Sala portrays this reality through the eyes of those who are living it because they do not have any other choice.

It is 4 o’clock in the afternoon and Mariam, 14 years old, still has her head wrapped in the keffiyeh that protects her from the dust and the summer sun while harvesting fruit. “I have a headache, maybe it’s the heat,” she says, handing the basket of peaches she received from her employer to her mother, Umm Khalid.

Every day at dawn, a van stops at the entrance of the camp where Mariam lives and takes her, together with many others, to the farm where she works. She comes back in the afternoon, when the heat has become unbearable.

Along with the Jordan Valley, Baladia Shmali – a 20-minute drive from Mafraq – is one of the two Jordan farming poles, with its peaches, grapes, apricots, tomatoes and cucumbers. This may seem unbelievable at first sight: it is a stony and sun-baked land where the temperatures in summer, which is the harvest season here, often exceed 35 degrees – more tolerable than the 42 damp degrees of the Jordan Valley in any event. The Syrian border is only a few kilometres away, and sometimes you can hear the explosions of the Daara offensive, not far from where the family of Umm Khalid once lived.

However, for the last year, Umm Khalid and her 11 children – a “soccer team”, as she jokingly refers to them – have been living here: a tent, a mat on the floor, some mattresses and a gas cylinder to cook. This camp, located in a dirt clearing between the fields, has no running water but is equipped with some electric generators. There are 37 tents for 160 people, all of them Syrian and somehow related to one another. They arrived from southern Syria 5 or 6 years ago; they followed the harvest seasons for a while, moving to the Jordan Valley in winter and coming back to Mafraq in summer. Between 2016 and 2017, they tell us, they were forced to move from one farm to the next every two months or so, in search of someone who would hire them.

Their rate does not change: 1 dinar an hour (about 1.20 euros), in a country where the cost of living is quite similar to that of Italy. Now these families have decided to settle here as long as possible to give their children the possibility to go to school and learn at least to read and write.

According to the Jordanian NGO Tamkeen, around 20,000 Syrians are working in the country’s fields, most of them women. As the Food and Agriculture Organization of the United Nations (FAO) confirms, at about 75% Jordan has the highest rate of female agricultural workers in the region.

People in the camp where Umm Khalid lives explain that this is simply due to the fact that women are in the majority. And anyone who is able to work is expected to do so, regardless of whether they are women, men or children.

Umm Khalid fled Syria alone. She lost track of her husband a long time ago; she does not know whether he died fighting or managed to escape somewhere else. Besides Mariam, even her two smaller daughters, aged 11 and 12, worked until last year, when one broke her arm falling off a ladder and the other hurt her back. When we ask her if sending Mariam to the fields alone every day – while she stays home with the other children – worries her, her answer is flat and stark: “We have no choice.”

The Jordan Compact: economic aid in exchange for work permits

Abu Hamza’s parcel of land is about fifteen minutes away from the camp where Umm Khalid lives. A group of around twenty women aged between 15 and 50 is hard at work. With their faces covered, their backs bent under the midday sun, they are weeding a tomato field, some with their bare hands, others with old rubber gloves.

Abu Hamza employs about 100 labourers every summer: “They are all Syrian, and three out of four are women,” he says. “I prefer working with women because they are less troublesome and complain less than men.” Not to mention, he adds, that hiring Syrians is cheaper than employing Egyptians. It is also less risky, since Jordan has made it easier for Syrians to obtain work permits, whereas things are getting more complicated for other nationalities.

In February 2016, the European Union and Jordan signed a deal called the Jordan Compact. In return for 700 million dollars in annual grants for three years and 1.9 billion dollars in concessional loans, Jordan committed to improving access to education and legal employment for the 1.3 million Syrian refugees living in the country (UNHCR talks about 670,000 Syrians, but they only consider registered migrants; at least as many unregistered refugees have settled in Jordan), who until then had been formally denied the possibility to work.

Despite these efforts, none of the women we met on Mafraq’s farms had a work permit. Most of them told us that they had a good relationship with their current employer, but in the past, their only option in the case of problems – such as non-payment – was to leave and look for new work.

As of the end of June 2018, the number of work permits issued by the Jordanian authorities to Syrians amounted to 105,404, only 4,400 of which were issued to women. Work permits for the agricultural sector stand at 43.1%. 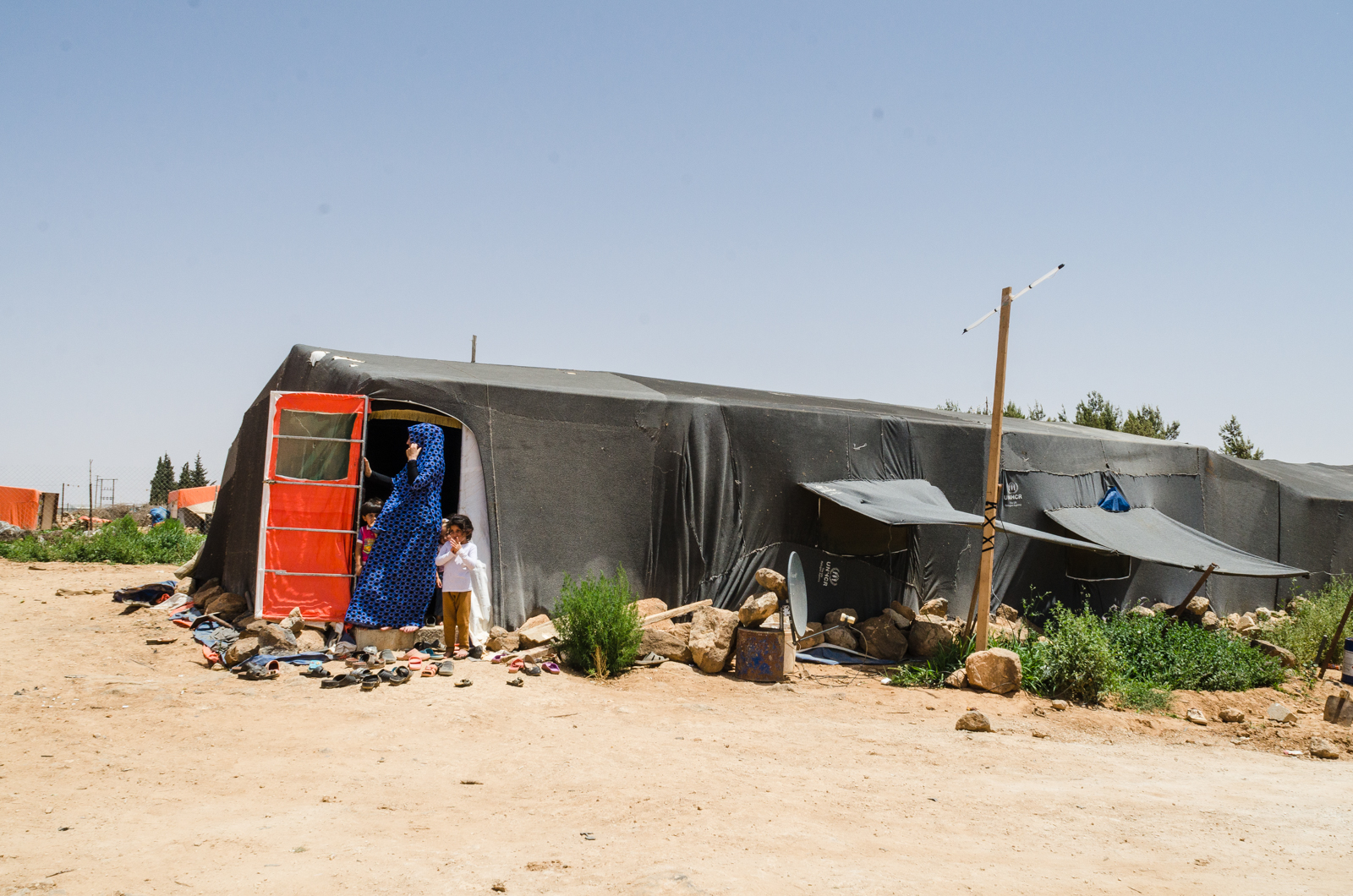 Siam looks out of a tent in the camp where she lives. There is no running water, but they have some electric generators. Province of Al-Mafraq, Jordan – July 2018.

According to ILO, the International Labour Organisation, this data clearly does not reflect reality: they estimate that only 4-5% of Syrians are actually working in the fields. The vast majority have obtained a permit for agriculture, which is easier to get, and then used it to work in different sectors, such as restaurants or other services, to have some kind of protection in the case of inspections.

In any case, the number of Syrians working in agriculture has skyrocketed, also because legal restrictions for hiring migrants of other nationalities – most of whom were Egyptians – have become stricter.

“In comparison to the workforce in the construction industry or other sectors, there are not that many Syrians working in the fields; having said that, their conditions are particularly worrying,” highlights Maha Katta, ILO’s crisis-response specialist.

The organisation has recently conducted a survey, yet to be published, interviewing 1,400 Syrians farm labourers: “The most alarming data concerns child labour and school dropout rates,” Katta says. The research also revealed that 60% of the families live in camps where housing conditions are precarious and services are very limited.

In Katta’s opinion, the country is trapped in a vicious circle: “After closing the borders with Syria and Iraq, exports have dropped and the market for Jordanian products has considerably shrunk. In order to be competitive, Jordan should concentrate on high-quality products and methods.” Foreign investments would be the best solution, except that “potential financiers are worried about investing in a sector where exploitation is so widespread,” she concludes.

“We have no choice”

In the distance, past the tomato field the women working for Abu Hamza are weeding, stand some greenhouses. It is in one of them that Siam’s daughter got sick last summer: “When she started bleeding, I thought it was her period, but after 45 days she was still losing blood.”

We meet Siam and her daughter Uala, aged 12, in a camp close to Abu Hamza’s farm. There is no public transportation from there to Mafraq, the location of the nearest hospital. Siam spent 5 dinars – almost all she receives for a whole day’s work – to take Uala to the hospital financed by the United Arab Emirates, which offers free basic healthcare to Syrians. “The doctor said he needed to run more tests to identify the cause and to treat her,” Siam explains. But the test he ordered cost 20 dinars, and the family could not afford it. “The doctor also said that she was probably unwell because of the heat, and that she should not go to work anymore.” So now Uala is being replaced by Doha, her younger sister, who has just turned 12.

Meanwhile, gender-based violence is also a growing concern. Recently the NGO Tamkeen has held meetings on this specific subject for women working in agriculture. But due to the stigma attached to sexual harassment and to the vulnerable condition in which they often find themselves, they seldom speak openly about such issues. “During our meetings, women sometimes talk about incidents, such as unpleasant remarks or fondling by their employers or co-workers, but as if those episodes had happened to an acquaintance. They never speak for themselves,” says Hanan, a Syrian woman who works as a mediator for Tamkeen in Jerash. “They are afraid to lose face, or at worst, expose themselves to the risk of honour killing,” Bader, a Jordanian mediator, adds.

Two years ago, Siam decided to give her older daughter in marriage as soon as she turned 14 to spare her from labouring in the fields and to “protect her.” When we ask whether she is worried for Doha (her other daughter) she answers, almost in a whisper, that of course she is: she has heard that men “don’t always behave” elsewhere, but in the farm where Doha works everything is OK, they all know one another. And, at any rate, just like Umm Khalid said before, at the moment “we have no choice.”

Cover photo: a Syrian woman weeding a tomato field on Abu Hamza’s farm. Province of Al-Mafraq, Jordan (photo by Daniela Sala, like all pictures in this article)