Homepage >> Approfondimento >> After Eu-Turkey deal, how to become second-class refugees

March 21, 2016 - Alessandro Lanni
In 2015, one quarter of asylum seekers in Europe came from Afghanistan and Iraq. The 8 March agreement between the EU and Turkey might create a double class of refugees: those who will have the right to pass and those who will have to go back.

48% plus 26% plus 17% equals 91%. The latest UNHCR are unequivocal: the overwhelming majority of refugees arriving in Greece through Turkey are Syrians, Iraqis and Afghans. This means that the EU-Turkey refugee deal concerns the three nationalities most affected by the wars that have been ravaging that area since 2001.

However, the agreement reached in Brussels on March 8 might draw a distinction between peoples who didn’t have a home in Europe until now, at least formally. Of course, we all remember the “preference” towards Syrian refugees expressed by Angela Merkel in August last year, but now there is a danger that this distinction will be made official.

According to Eurostat, in 2015 Syrians, Afghans and Iraqis made up half of the asylum seekers in Europe: about 650.000 on a total of 1.300.000. So far, these three national groups have been granted a similar treatment by European Authorities, but things might change after the recent Brussels deal between EU and Turkey. 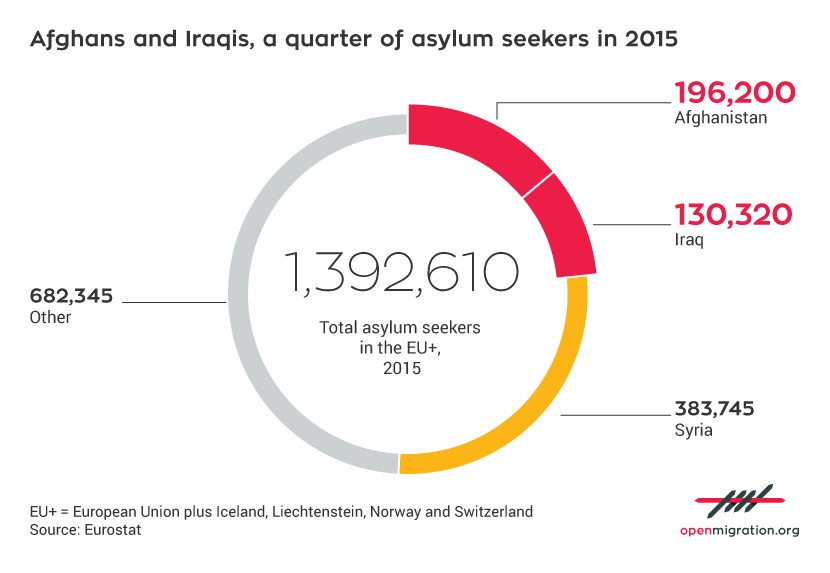 According to a first draft of the document, Syrians will continue to find a way to Europe. Perhaps not by boat to Lesbos, but through a privileged route that was established as a result of the meeting between Turkish Prime Minister Davutoğlu and the EU leaders. Everyone else will be sent back to Turkey, which will get 3 billion euros (in addition to the 3 it received from Europe only a few months ago) in order to deal with the return influx.

The statistics indicate that Afghans and Iraqis will be received in Turkey, a country that applies geographic limitations and grants refugee status to European citizens only, despite having signed the Geneva Convention and the 1967 Protocol on refugees. Therefore, refugees from Iraq and Afghanistan would not enjoy the rights granted to those who flee their countries seeking international protection.

«I am deeply concerned about any arrangement that would involve the blanket return of anyone from one country to another without spelling out the refugee protection safeguards under international law»,  said Filippo Grandi the United Nations High Commissioner for Refugees.
Ultimately, the EU-Turkey deal results in an exchange between refugees stuck in Greece and Syrians currently housed in camps in Southern Turkey, and it establishes a distinction between first-class and second-class refugees. The latter will see the gates to Europe close in their faces, while the former will be given free passage towards Germany and the North.

Hidden in the details of the EU-Turkey agreement, there might be a U-turn in the policy towards asylum seekers. As is known, the status of refugee is not granted (or denied) based on the country of origin, but on the actual danger that a person – an individual – is in. The forceful turning down of groups in a third country feels very much like a change in the principles of the 1951 Convention.

That said, the case of Iraqi and Afghan refugees is indicative of the upcoming shifts in policy. So far, the recognition rate of international protection for Iraqis and Afghans has been very high. From 88% and 70% respectively in the third quarter of 2015, it dropped to 80% and 57% by the end of the year.

And here is the irony: based on this data, Iraqis would have be eligible for relocation (which requires a EU-wide average recognition rate of 75% or higher) and might be sent back.