Homepage >> Approfondimento >> Refugees, who wanted them and who doesn’t anymore

February 23, 2016 - Alessandro Lanni
It's growing the number of countries that wants to modify the Convention releting the status of refugees. "But It would be a very serious political mistake" says Gianfranco Schiavone of the Asgi.

So it is written in Article 1 of the Convention Relating to the Status of Refugees, subscribed sixty years ago by more than 140 countries.

For centuries, this article and this document have been one of the cornerstones of international law; today they are threatened by a new dimension of the migratory phenomenon, but also by the lack of a European response.

On December 28, 2015, Denmark’s Prime Minister Lars Løkke Rasmussen called for a revision of the Geneva Convention on the rights of refugees. In the previous months, the same request had been already made in several countries, notably by Bart De Wever, president of The New Flemish Alliance (N-VA), a centre-right political party in Belgium.
«There comes a time when you have to discuss (…) whether to adjust the rules of the game», Rasmussen declared during an interview with a Danish TV broadcaster in reference to the 1951 Convention, adding: « It’s clear that at some point, if Europe does not get this under control, then you have to start a discussion».

According to Rasmussen, two points would have to be dealt with: the issue of Turkey as a corridor to Syria on one hand, and the reunification of refugee families in Europe on the other. Not only does Denmark’s stance call the whole humanitarian reception system into question, but it also has a symbolic meaning: Denmark was the first country to sign the agreement on the status of refugees, over sixty years ago.

«The increase in the number of arrivals in Europe is not a temporary, short-lived phenomenon», observes Gianfranco Schiavone, vice-president of the Association for Juridical Studies on Immigration (ASGI). «The Geneva Convention is one of the most important international conventions to mark the development of our civilization as we know it today».

Denmark’s announcement, which might be followed by other countries, does not call the Convention itself into question, explains Schiavone. Rather, some European States would “compress” the right to international protection that is granted by the current European regulations. «And it’s very dangerous, but more importantly, it signals a profound political short-sightedness: in the near future, Europe will have many more refugees than it has seen so far, because of the global situation (especially from areas in close geographic proximity to Europe), characterized by a dramatic increase in conflicts and violation of fundamental human rights».

Who hasn’t signed the Convention 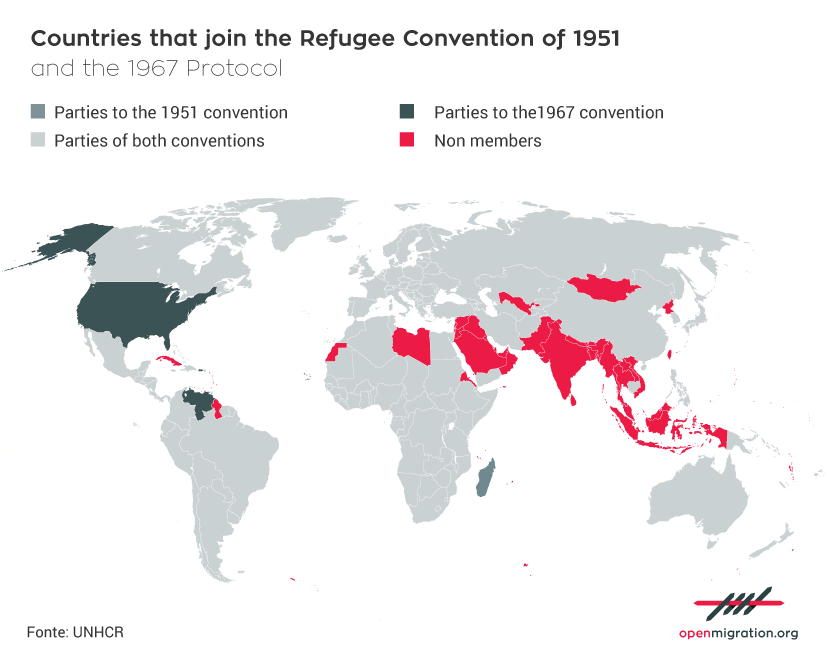 The total number of States Parties to the Convention on the Status of Refugees (and/or to the 1967 Protocol that updated the Convention to the changes in the geopolitical landscape) is148. However, this number does not include some key states in the international arena. As can be seen from the map, neither India nor Kazakhstan have signed, nor Indonesia or Pakistan, nor some Middle-Eastern countries (such as Lebanon and Jordan) that are now home to millions of refugees in camps situated on their national territories.

A further case is that of the Persian Gulf countries. Let us take Saudi Arabia as an example. Article 42 of its Constitution reads: «The state shall grant the right to political asylum when the public interest demands this». It is not, therefore, an individual right accorded to people regardless of their provenance, but rather a form of protection granted by the State – in this case the Saudi authority – if it is “expedient” to do so. Previously, the wealthy countries of the Arabian Peninsula had been accused of being indifferent to the plight of refugees from Muslim countries such as Syria, Iraq or Afghanistan.