April 30, 2020 - Daniela Sala
Under Italian law, a person may only be buried in the Municipality of residence or in the Municipality where he or she died. On top of that, Islam forbids its believers cremation and burial in a sealed casket: the body must be buried, with the face towards Mecca. But out of 8,000 municipalities, only some sixty have a cemetery area dedicated to Muslim worshippers. Daniela Sala tells us how the Muslim community in the Lombard provinces most affected by the virus is getting organized to bury their loved ones.

“I haven’t seen my kids in weeks now. I usually leave my place at 6:00 a.m. and I don’t get back until 9:00 at night. Not to mention when they call you at night. In that case I end up going straight to the office and take a shower there before starting the day all over again. This is something that cannot be put off: we can’t leave the families with a dead man at home”.

Since Tallal Khalid decided to set up an Islamic funeral parlour seven years ago, he has never experienced such a situation: “We have always done two, or at most three services a week. But since the Covid19 epidemic began, his phone hasn’t stopped ringing and requests have increased to three a day: ” People no longer die ‘normal’ deaths,” he adds, “nearly all deaths are Covid cases”.

Khalid has lived with his family for 32 years in a small village in the province of Brescia. A native of Morocco, before opening a funeral parlour he worked as an insurance expert. In spite of the current difficulties, Khalid, who has always been active in the local Muslim community, says he is happy and proud of his choice: ” It is an honour to be able to bury a person,” he says.

In March, the photos and videos of the army convoys carrying the bodies from the Bergamo cemetery (where deaths have tripled compared to the average in recent years) to crematoria in other regions were posted by all major Italian and foreign media, becoming one of the symbols of the current emergency.

But if burying the coronavirus dead in such a short time has proved to be tough, that doesn’t even begin to describe how difficult it is for Muslims: under Italian law, a person may only be buried in the Municipality of residence or in the Municipality where he or she died. On top of that, Islam forbids its believers cremation and burial in a sealed casket: the body must be buried, with the face towards Mecca. But out of 8,000 municipalities, only some sixty have a cemetery area dedicated to the Muslim worshippers.

In Italy it is estimated that there are about 2 million people of Muslim faith. The Moroccan community is the third largest community of foreign residents, after Romanians and Albanians. Out of the 420,000 Moroccan citizens who live in Italy, the majority – i.e. 93,000 – live in Lombardy, in the provinces most affected by the coronavirus.

Most foreign citizens chose to repatriate the body. However, borders are now closed for the dead as well: at the beginning of March, a cargo ship carrying bodies from Italy to Casablanca was denied access by the Moroccan authorities and the bodies were sent back.

On 24 March, Ucoii (the Union of Islamic Communities of Italy) reported the case of a Macedonian family from Pisogne, in the province of Brescia, who had been stuck at home with their mother’s casket for ten days. “The family – says Khalid – spoke to a fellow countryman who had promised he could repatriate the body. However, this person disappeared.” Once, thanks to the Ucoii and the local authorities, the Municipality of Brescia gave the go-ahead for burial in the dedicated area of the municipal cemetery, Khalid was called to transport the coffin: “It was late, it took me more than an hour to get there, we worked all night to transport her down the third floor, through the stairs, and took her to Brescia, where she was finally buried. But in Brescia they were very clear: they will not make other exceptions, because they only have approximately ten places and they want to keep them for the residents”. 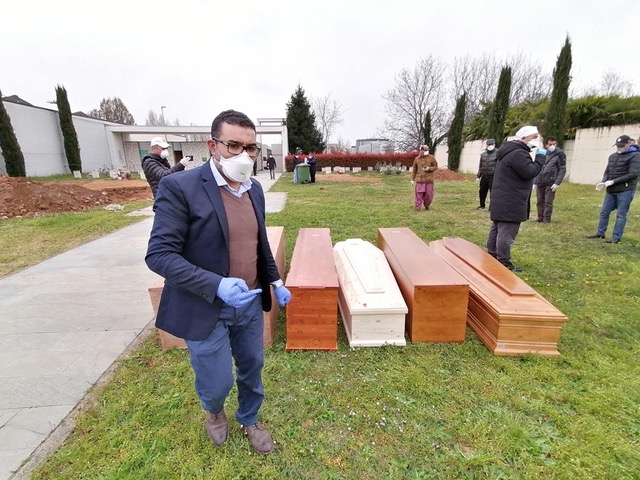 Burial of Muslim worshippers in the cemetery of Azzano San Paolo in the province of Bergamo, courtesy of Wahid Arid.

“Every time a person dies in a Municipality where there is no cemetery, it is a misery” says Yassine Lafram, president of Ucoii. “We receive reports daily and now we are dealing with two Municipalities that have not replied to us for weeks.  Our request is not extraordinary: all we need is a space of 5-10 square meters inside the existing cemetery, a space delimited even only symbolically, but dedicated to the Muslim worshippers. This is the only requirement that we cannot do without. Since Italy is a secular country, we would like to be able to express our religiosity”.

Lafram believes that this does not require special procedures, a municipal ordinance – at most – will suffice: “I understand the difficulties for small municipalities, but in this emergency situation at least the provincial capital municipalities should take on their responsibilities: you can’t add pain to more pain”.

Underlying the difficulties is dissension between the Italian State and the Muslim Church, as opposed to the existing understanding with the Jewish and Buddhist communities and the Evangelical churches, which regulates various facets of the relationship between the State and religious representatives.

The burial issue does not only concern Lombardy or the provinces that were most affected by this coronavirus. In Rome, for example, the Islamic Centre, which is dependent on the Mosque of the Capital, also reported having received a number of requests for “unusual burial, which will soon lead to the unavailability of space in the Islamic cemetery in Rome, posing a problem for the future”.

In order to tackle the emergency, Ucoii has published on its website a list of existing cemetery areas and specialized funeral parlours. Moreover, since March it has activated a phone line for reports “We have treated at least one hundred cases over the last month, including a person from Reggio Calabria who could eventually be buried only in Rome,” explains Nadia Bouzekri, Ucoii vice-president. “And these are just the cases which we have learned about directly. Now the situation is a bit quieter: we have successfully opened about fifteen cemetery areas throughout Italy and we are working with another dozen or so municipalities”, also thanks to the collaboration of the Ministry of the Interior and the prefectures, as Lafram points out several times.

There are in fact several good practices, such as Milan, where on March 26th Mayor Giuseppe Sala signed an ordinance allowing, by way of derogation from the cemetery rules of the capital, the burial of all the residents of the province. Another example is Piacenza, where Mayor Patrizia Barbieri took action personally to open a dedicated cemetery area.

“We are all on the same boat,” says Lafram, “and I would very much like to remind you that many doctors are also among the victims, including doctors from abroad: they are heroes on the front line in dealing with this emergency.

Khalid, also in the forefront, had to provide himself with protections similar to those that doctors have, being often required to come into contact with corpses and enter hospital morgues. The coronavirus emergency has necessitated the suspension of burial rituals also for Muslims: “We cannot perform the ceremonial washing of the body: we can just wrap it in kafan (a shroud, Ed.), after which the coffin is sealed. Funeral prayers take place privately and observing distancing rules”.

Just like the mass, the Friday collective prayer is also on hold: “Even before the lockdown decree we decided to suspend all our collective activities: not only out of compliance with the various decrees, but also to show our public spirit and sense of belonging,” explains Lafram. A necessary yet even more painful restriction during the month of Ramadan, which began on April 23rd: “Ramadan will be strictly at home. Normally this month is composed of a private dimension, namely fasting, and a collective one, with iftar (the break of fasting at sunset, ed.) with family and neighbours and the collective prayer every evening.  This year, the latter won’t be possible: this breaks our heart, but it is absolutely necessary”. In the meantime, several imams have made plans to guide the prayer and various moments of reflection in streaming, “which got a good following”.

Cover image: Burial of Muslim believers in the cemetery of Azzano San Paolo in the province of Bergamo, courtesy of Wahid Arid.