Homepage >> Approfondimento >> “I’m not a criminal”: the story of a former passeur in Niger

December 21, 2017 - Giacomo Zandonini
Niger – one of the main territories along the Saharan route – is one of the African countries which has most been impacted by decisions made in Europe at the big table on funding and humanitarian aid. Things here are never black or white, especially if you look close enough, as Giacomo Zandonini did for us. Here he met with former passeur Bazou Ider, whose life is intertwined with the history of modern-day Niger.

Bazou Ider is standing at the door to his home, which stands along one of Agadez’s large dirt roads heading towards the neighbourhood of Toudou. A mat curtain shelters us from the sun, still scorching in late September. His grandchildren run about the yard while the women smash millet seeds for the boule sitting around a low table made of wicker. Ider, a man of 55 with a proud look in his eyes, is very familiar with the dynamics of migration in the region of Agadez. And he knows the Sahara “like the five fingers of my hand” he says, holding up his wide palm.

His life, and that of his wife Amsaddou, a tiny, determined, woman, has changed radically since the autumn of 2016 when the government of Niger decided that the flow of migrants through Agadez to Libya and Algeria had to stop. “All of a sudden, under a law I’d never heard about,” he still says with a tone of disbelief, they started to arrest those who, like him, were helping the migrants on their way.

“I’d been transporting passengers to Dirkou or Assamaka for years,” he adds, stepping into his living room, “and I know every grain of sand on those tracks.” Like hundreds, if not thousands, of his countrymen, Ider chose to quit. “Not because I feared the controls,” he explains, “but to obey the decisions made by the authorities” – that is, Law 36 on the “illicit trafficking of migrants”, which was passed in May 2015 but very rarely enforced, at least up until September 2016.

For his family, he says, “it was a complete disaster.” Twenty-five people including children, daughters-in-law, and grandchildren were living off his business. “Now we struggle to pay the children’s tuition, and we need to economise on food all the time.” Like many former colleagues, he hoped to be compensated with a state subsidy that would at least in part replace the income from the transportation of migrants. But that was not the case.

Starting over with three cows

The only family member to receive any help was his wife Amsaddou who, along with 29 other women, was selected for the “Project to support the wives and mothers of illegal migration operators in the City of Agadez” run by the Association des Femmes Nigériennes contre le Guerre, a local NGO. A smaller initiative within the programme Paiera – Plan d’Actions à Impact Economique Rapide à Agadez (funded with 8 million euros from the EU Emergency Trust Fund For Africa), aiming to convert the migration economy in the vast region of Agadez.

“With the funds from the project,” Amsaddou Ider tells me, “I purchased three cows which I put out to pasture outside of town.” For the first time in her life, she is earning some money, and she does not intend to stop. “At the beginning, I was worried, I wondered how we were going to get by,” she admits, frowning. “But this project has given me confidence.” With sales from the milk she is hoping to buy “some sheep, a freezer, and then to open a concession stand to sell cold drinks.” 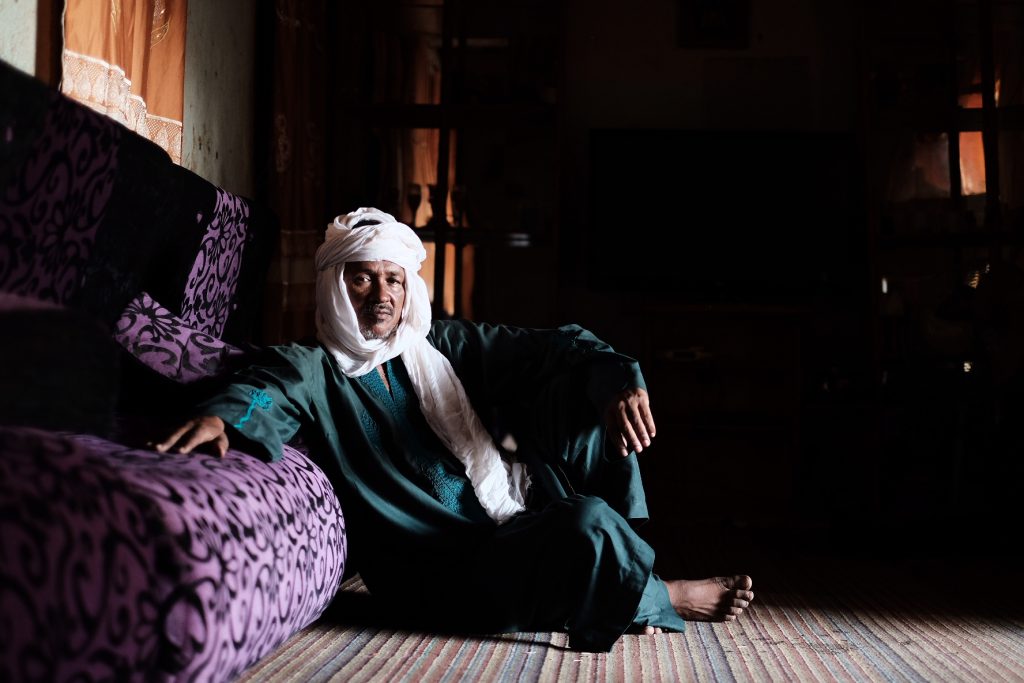 Her profits were nothing compared to her husband’s, who was making “between 150,000 and 200,000 CFA francs (the currency used in most of the former French African colonies, between 228 and 300 euros, roughly equivalent to the monthly pay of a local police officer)” for a single trip to Libya or Algeria. Nonetheless, her earnings mark a change for the better for Amsaddou and the family.

“She’s going to leave me now,” Bazou quips. His joke causes his wife to shoot back: “No, I’m not,” but it strikes a nerve for many of the drivers and the cokseurs, the middlemen in the big market of migration in Agadez: the loss of a role in the community and their families.

Like the 6,000 other “migration players” in the region – water-sellers, ghetto operators, brokers, restaurant owners, and drivers – Ider submitted a dossier to access the funds of the Paiera programme. 1,500,000 CFA francs each — the equivalent of a few trips to Libya — to start a new business. “At first, vehicle owners were not eligible,” he explains with a shrug, “because we were criminals in the eyes of the EU…But the criminals are those who have eight or ten pick-ups, who are smuggling drugs, surely not us. Look at my house: do I look like a rich man to you?” he asks, pointing at the small yard enclosed by a wall made of straw and clay.

A piece of history in modern-day Niger

Ider’s life story has a lot in common with those of other passeurs from the Agadez regions, and it proves useful to understanding the impact and the consequences of the attempt to shut down the route from Western Africa to Libya via Niger. As a Tuareg, like most of Agadez’s population, Ider was not yet 30 when he fought in the first rebellion in the north: a low-intensity civil war that lasted five years and that mobilised all the communities in this part of the desert, an area as big as France, and especially the Tuareg and the Toubou, an ancient nomadic people inhabiting Niger, Chad, and Libya.

After laying down his arms, Ider chose to enroll in the National Guard, in accordance with the peace agreements. On the bare living room wall, the main space in his small home, two certificates serve as a reminder of his time there: his training as a sharpshooter by French officials, in Togo and Burkina Faso, and acknowledgement of his participation in a UN peace mission on the Ivory Coast in 2004. But Ider the tirailleur left the army in 2007 when a second rebellion threatened national unity, and divided the Agadez communities. He was persuaded to join his brother, who was busy carrying migrants to the oasis of Dirkou, along the routes to Libya, and to Assamaka, at the Algerian border. Like many former rebels, and supported by a government eager to see them disarmed, Ider became a passeur. 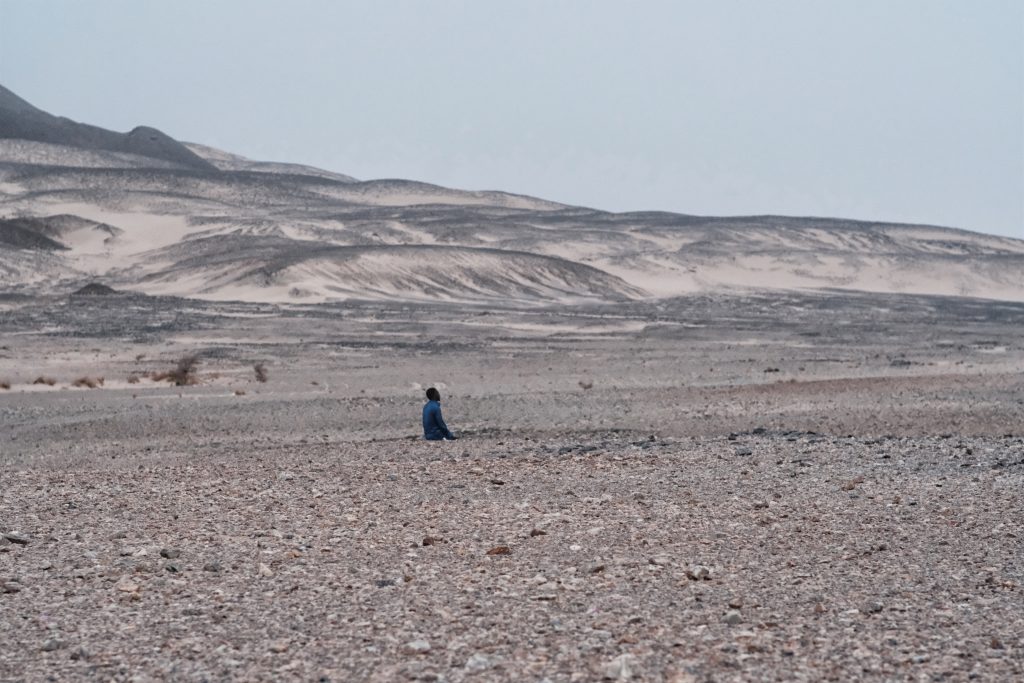 A driver praying near the gold mines at Aouzouger along the Saharan route to Libya (image: Giacomo Zandonini)

“There are two things we migration operators know how to do,” he explains, “and they are fighting and driving through the Sahara. We quit the former for the latter. Now Europe is demanding we quit this, too, but what are they offering instead?” Ider maintains that “for now, we’re not thinking of going back to fighting, but to respond with our votes to the politicians acting under orders from the EU,” but adds that “young people are the ones at risk, because they don’t see any future.”

Paiera, the conversion programme that began in early 2017, is struggling to take off, held hostage by red tape and the difficulties in identifying the actual players in the migration business. Once fully operative, it will still only cover 3% of applications submitted, EU representatives announced in late July. While meetings and conferences are still underway between Agadez and the capital Niamey, transport services continue to depart from Agadez in an exhausting game of hide and seek between drivers and law enforcement officers. Fewer and fewer of them perhaps, but more secretive, dangerous, and lucrative ones.

Cover: a group of migrants returning from Libya in the village of Tourayat (all images in this article by Giacomo Zandonini).
Translation by Francesco Graziosi. Proofreading by Alex Booth.