August 16, 2017 - Andrea Quadroni & Michele Luppi
After our reports dedicated to Ventimiglia and Como, we close our trilogy on fatal incidents and pushbacks at those Italian locations where migrants cannot cross into other countries: France, Switzerland, and, in this case, Austria, where a general election is scheduled for October 15, the xenophobic far-right is on the rise, and the government is butting heads with Italy and using anti-immigration rhetoric during the campaign. Amid internal memos, shakedowns on trains, and steep mountain passes, Michele Luppi and Andrea Quadroni went to investigate the impact of this all on people’s lives.

It took weeks of research – and the kind of work that maybe others should have done – to discover the identity of the young woman who died on November 16 last year near the Borghetto station at the border between Veneto and Trentino. She was walking along the tracks when she was hit by a local train headed to Verona. We know now that her name was Rawda, that she was 29 years old, and had arrived in Italy less than ten days earlier. She had on her the badge for one of Milan’s main reception centres for migrants in transit, indicating that she was trying to find a way to travel north after landing in Reggio Calabria.

This story was told to Open Migration by Alessandra Volani of Antenne Migranti, a project that tracks and monitors migrant flow along the Brenner route. Alessandra is one of the research leaders together with Valentina Sega and Zabenay Jabe Daka, an Ethiopian citizen and member of a regional association called Amici dell’Etiopia (Friends of Ethiopia). “We realised immediately,” Alessandra recounts, “that all attempts by the authorities to identify the woman and notify her family had effectively ceased. The city of Avio had actually already begun preparations for her burial though the body had not even been given a name and the family had not been informed.”

The turning point in this story came in the form of a coincidence combined with the determination of many ordinary citizens. During a visit to the mortuary in Avio on November 25, Alessandra Volani discovered a bag near the body of the woman, which contained the few belongings she had had on her at the time of her death. “Inside it,” Alessandra explains, “we found some notes written in Amharic that we translated with Zabenay’s help.”

Following several calls to Ethiopia to the numbers found in the note, they were able to finally contact the woman’s father, and they also discovered that Rawda had a daughter. Thanks to the work of Valentina and many others, the entire town, including the parish and the Ethiopian community, then got involved. A fundraising campaign was launched, which collected 11,000 euros, enough to fly the body back to Ethiopia and give Rawda’s family and daughter a bit of support. On January 20, almost two months after the discovery, Rawda’s body was back home.

However, many questions remain, the most nagging one being what led the woman to walk along the tracks in the first place. It is believed that she was forced to step off a train at the Borghetto station following a police check and that, finding herself in an unfamiliar area at night, she had chosen to walk all the way back to Verona.

Four migrants have died along the Brenner route since November 2016: three more shared Rawda’s fate, all of them Eritreans. A man and a woman were found dead on December 3 aboard a freight train at the station of Wörgl, in the Austrian Tyrol, a few kilometres from the German border. The train carrying heavy vehicles had left the night before from Verona. A third man who was travelling with them was hospitalised in Innsbrück in serious condition. The incident was reported on the website of the Tiroler Tageszeitung, and is thought to have occurred during unloading operations; the man and the woman, probably unconscious from exposure, were accidentally crushed to death by a truck.

This incident, as Reuters reported, led the Austrian authorities to redouble searches on all freight trains in transit between Italy and Germany in order to find any stowaways. 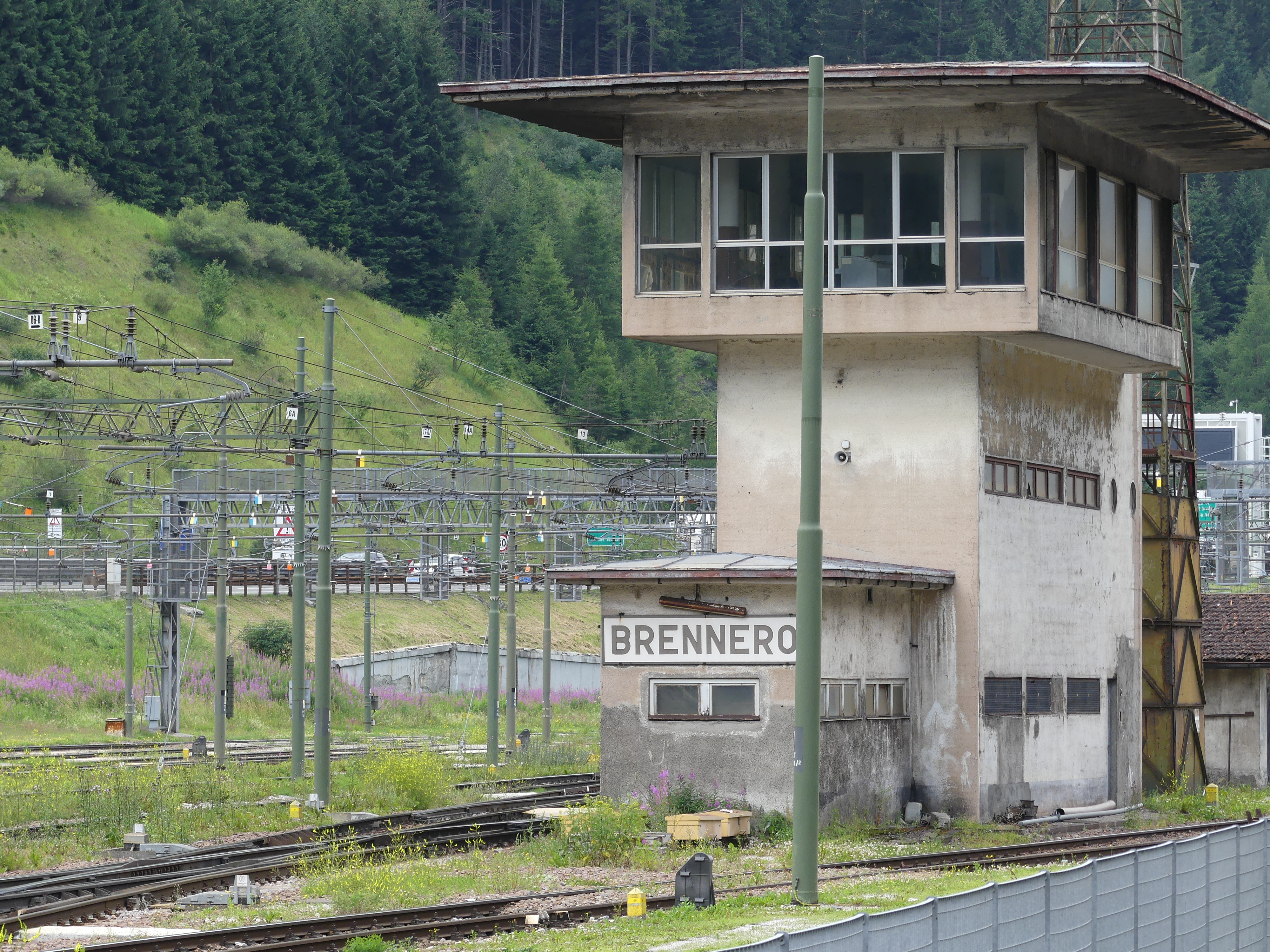 A few days earlier in Bolzano, on November 21, 17-year old Abel Temesgen was killed while attempting to climb onto a train at the station’s freight yard. “His story is emblematic,” Anna Brambilla from ASGI told Open Migration a few months ago, “of the many omissions facing unaccompanied minors: he was refused entrance at the camp for adult migrants in Messina after giving conflicting statements regarding his age (16, then 21), he then travelled through Rome and the Milan hub, was stopped by the police in Bolzano, was killed by a train just outside the city, and eventually certified as a minor only after his death.”

These deaths show that trains are still the chief means of transport for migrants trying to cross the border, but not the only one. Since controls have been intensified not only at Brenner station but along the entire railway line from Verona, people have increasingly been trying to find new ways to cross, including buses with international service to countries like Germany, such as Flixibus, as well as smaller services operating on minor passes such as Malles.

The road to the north, interrupted

Today, at Brenner there are no all-terrain vehicles with the Austrian coat of arms, no military vehicles, no migrants camping, no families trying to cross into Austria and Germany, no sleeping bags being passed out in the railway station. On the other hand, the police, the Carabinieri, and the Alpini are thoroughly searching all passing trains in both directions. Because of border cooperation, this practice has been common for some time along the routes that connect Tyrol to South Tyrol through Brenner. The tension among law enforcement officers at the station, however, is palpable, maybe in part due to recent statements by the Austrian authorities who have raised their voice against Italy over immigration issues (the same thing is happening at Tarvisio). Local and Intercity trains in both directions are being searched by about ten officers, though only two or three actually board the carriages. “In fact, for a few months now patrol officers have been boarding as early as Verona, Trento, Bolzano, or Eisack,” Federica Dalla Pria, coordinator for Antenne Migranti, explained. “The officers are meticulous, asking for identification, stopping people, checking that there are no stowaways. As a consequence, the number of people arriving in Brenner has decreased sharply.” 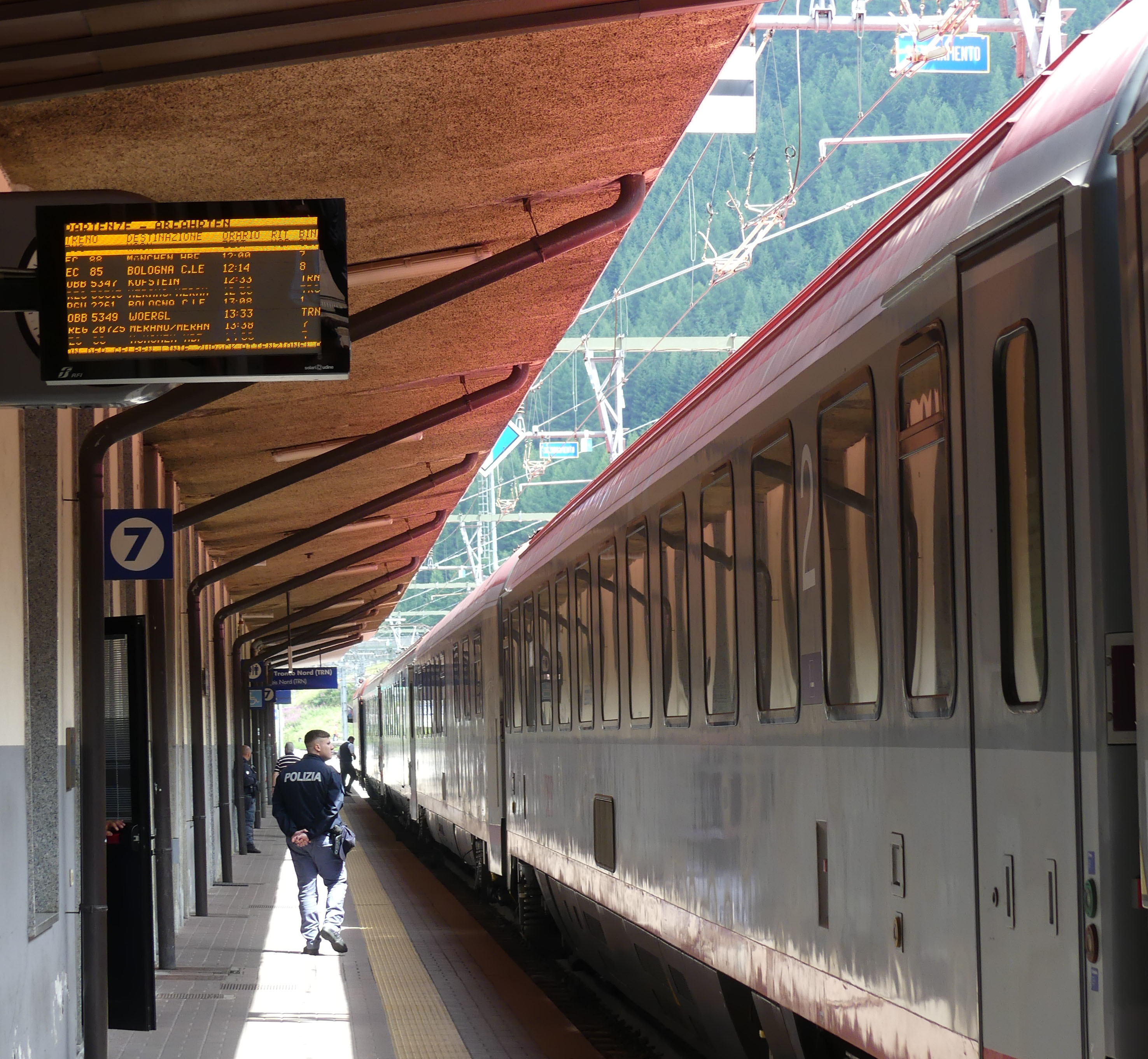 Those who are stopped are taken off the trains and brought to the transit police station and the border post. According to Antenne Migranti, those headed for Austria are put on trains to Bolzano; some, but not all, are handed a piece of paper ordering them to go to police headquarters. Unaccompanied minors are handed over to the Volontarius operators who run a reception centre in the small Alpine village.

2015 – when the border to the north was the busiest one, especially for those coming from the Balkans (mostly Syrian, Afghan, and Pakistani refugees) – seems like a long time ago. According to data from the Ministry cited by Melting Pot (the media outlet which also uncovered racial profiling in searches on trains), during the first three months of 2016 about 800 illegal foreign nationals were stopped and 150 people voluntarily sent back from the border in Tarvisio and Brenner combined. It is hard to say whether the trend is stable or rising.

Tyrol police chief Helmut Tomac recently said, “about twenty migrants are found and sent back every day.” The search is not limited to the Italian side of the Brenner route. With the arrival of spring, there was a considerable increase in patrol operations even on the mountain passes, and there have been reports of people being caught and then sent back to Italy. For instance, in Bolzano, between late 2015 and early 2016, about 350 migrants were staying in the park near the station. The authorities addressed the situation in late September 2016 with a memo from Department Director for Social Policy, Luca Ciritelli – which basically revokes reception for anyone, no matter how vulnerable, who arrived in Italy seeking asylum without being sent directly by the Ministry.

It appears that under the new regulations (that many suspects are unlawful) for families, only mothers and children under 14 can be taken in. Fathers and other adult family members are excluded unless the man is the only adult member of the family. Caritas director Paolo Valente did not mince words: “Under these regulations, families are split and people are being left out on the streets, especially women with children or pregnant women and minors over 14, fleeing from desperate conditions. It’s unacceptable.”

Ten months on and with tightened security along the entire route, the numbers in Bolzano are going down. Nevertheless, between asylum seekers (mostly Pakistani and Afghans) and people who were not granted protection (mostly from Sub-Saharan Africa), about 150 people have been forced to sleep in makeshift shelters. Add to these about 50 migrants who have arrived over the last few weeks, some of whom only stay for a few days. 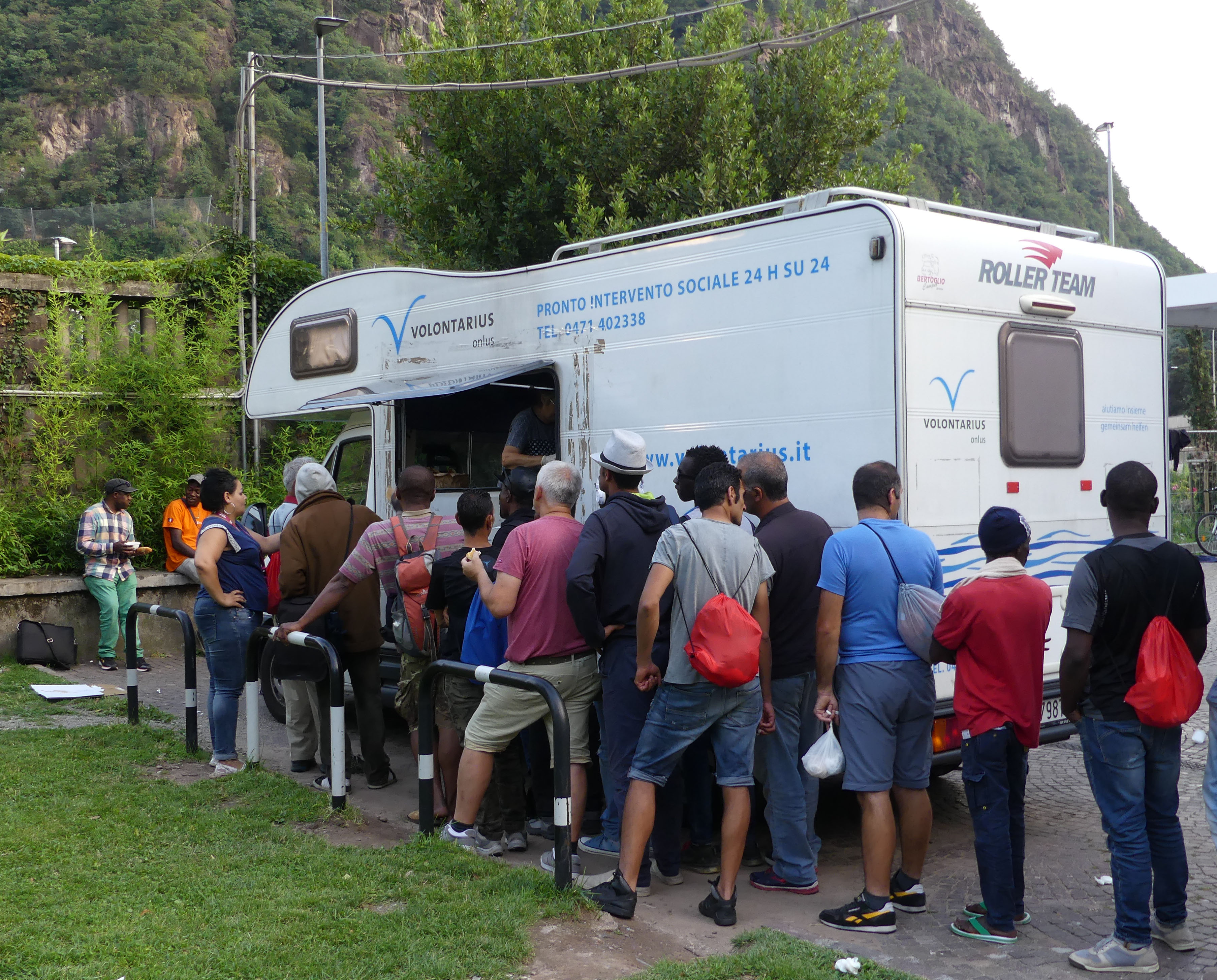 In Piazza Verdi, volunteers from Sos Bozen – with supplies from Médecins Sans Frontières – are distributing blankets, sleeping bags, and hygiene kits; from a trailer in the same space, Volontarius and Cooperativa San Vincenzo are serving dinner. “If we were any closer to the border, we’d be like Ventimiglia. Many are arriving here by Flixibus now, and they try to cross not just on trains, but also through the mountain passes. We even know of people who made it, but they are the exception,” explained Sos Bozen Karim Cirimbelli, who has called on the city to open a centre for migrants in transit like the ones in Como and Ventimiglia. After all, following recent arrivals by sea, Bolzano is expecting a spike in the number of migrants by the end of the summer. Let’s hope that there won’t be any more dead to mourn on the mountains here in this corner of Italy.

Translation by Francesco Graziosi. Proofreading by Alexander Booth.
Cover image: Police officers on the stairs at the Brenner railway station (all images in this article by Michele Luppi).