September 21, 2017 - Eleonora Camilli
The evacuated building on Via Curtatone in Rome is now protected by a barbed wire fence. The homeless refugees are scattered throughout the city, having left behind many of their possessions. Eleonora Camilli has been with them since day one, through multiple evictions and sit-ins, and has gathered oral testimonies from Mediha, Aster, and Biniam.

“Casa mafi, mafi“. “There’s no home, no home”. Mediha, 58, is placing her cardboard box on the ground next to her suitcases. A tattooed cross on her face reveals her Coptic faith and her Eritrean origins. It’s 10:30 p.m. on August 19th: this morning, 500 police officers in armoured vehicles evacuated about 800 people from a building on Via Curtatone, near Piazza Indipendenza in Rome and right next to Termini station. By the evening, not knowing where to go, 200 of the former occupants settled in the green areas of the piazza, right across from the building where they had been living for four years, where only families with children were allowed to re-enter in the afternoon. In a matter of days, that makeshift camp would become a symbol of the failure of Rome’s integration policies for refugees, and not only. It was a prelude to weeks of evictions, resistance, failed negotiations, and a new social emergency. 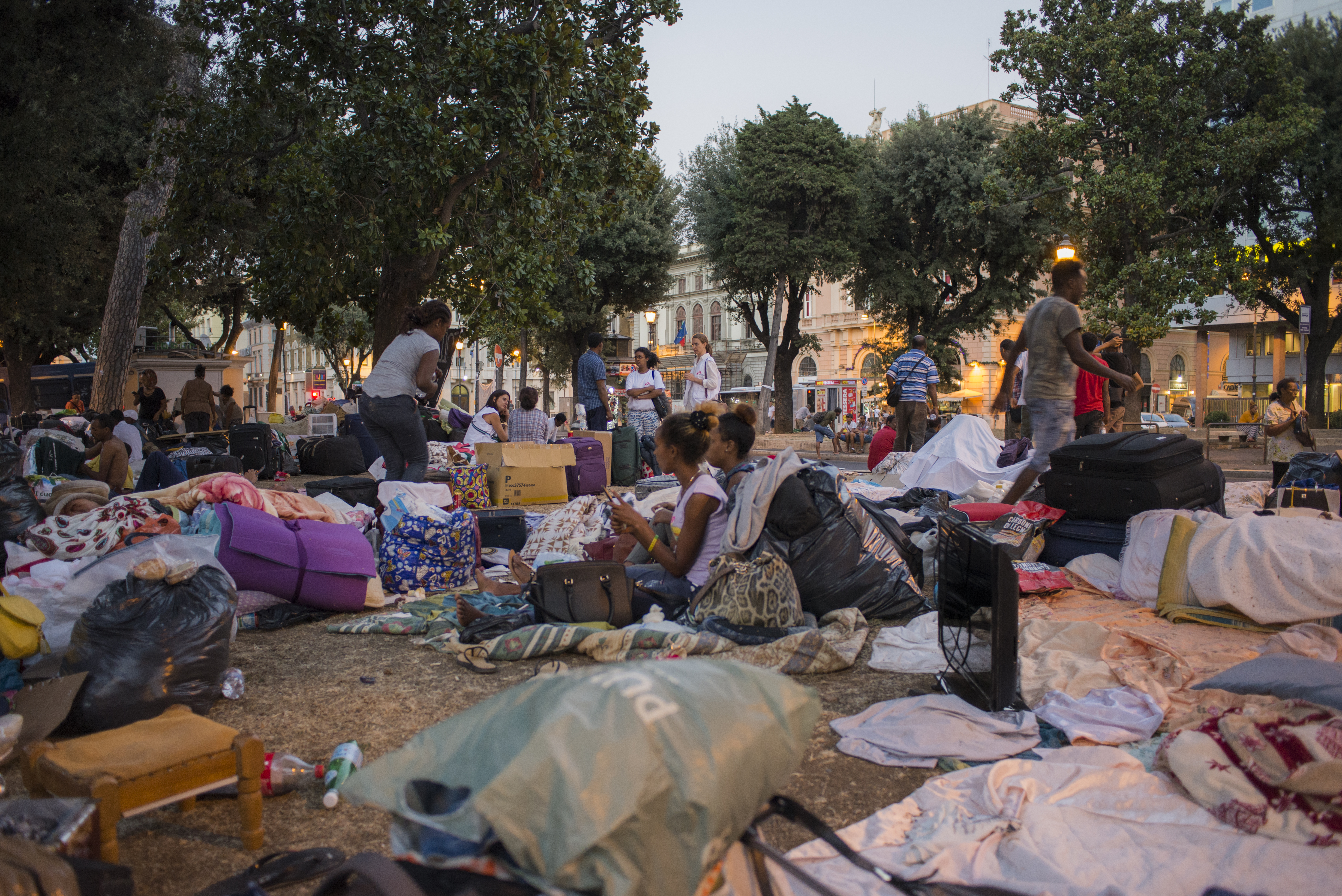 Eritrean and Somalian families spend the night in a square near Termini station with the few belongings they were allowed to take from the evicted building (photo: Federica Mameli)

The occupation and the October 3 shipwreck

That the building on Via Curtatone, former home to the agricultural cooperative federation, was functioning as a kind of squat was a long-known fact. It started soon after the infamous shipwreck of October 3, 2013, as part of the so-called tsunami tour: a series of occupations of vacant buildings organised by various housing movements. Some of the survivors from the shipwreck that had claimed the lives of 368 people off the coast of Lampedusa had settled on Via Curtatone. All of them were Eritreans and Ethiopians, many in transit towards other EU countries, while a few had sought asylum in Italy. At the time of the eviction, all the occupants were refugees; some of them had been living in Italy for several years on a long-term residency permit. The occupation was indeed a “controlled” one: you could not enter the building without proper papers. These documents alone, however, were not enough for the refugees to find employment or rent a house. “Why did they make us stay here if they couldn’t help us? We might as well have gone to France or Germany; we’d be protected there. Here we are not.” For all of them, including Mediha, the enemy is the Dublin Regulation, under which they are obligated to seek asylum in the first European country they enter. “I have been in Italy for five years. I am old. I get by doing house cleaning every now and then. This is the only place I had found where I could stay; all of my life is in there. I’m not leaving until I’ve got it all back.”

Mediha and the others would remain on the streets for almost a week. In the heart of Rome, with no toilet facilities and only a few humanitarian groups providing assistance: MSF, Intersos, the Red Cross. On August 23, law enforcement officers are deployed again for a new evacuation, this time on Piazza Indipendenza. Officers remain in riot gear throughout the day, with the refugees barricaded on the piazza: Rome’s auxiliary bishop Paolo Lojodice, delegates from the UNHCR and the Eritrean community are also on the scene. They negotiate with law enforcement and representatives from the city’s social operations room to prevent violent action and find a common solution. Meanwhile, at the prefecture, negotiations are underway between the city, the region, and the property owners. Several options are examined: from centres available to the city for the more vulnerable cases, to an apartment complex in the province of Rieti made available by the Curtatone owner to 40 families. By midday, it seems like a clash has been successfully avoided, and a conciliatory solution seems nearer than ever. 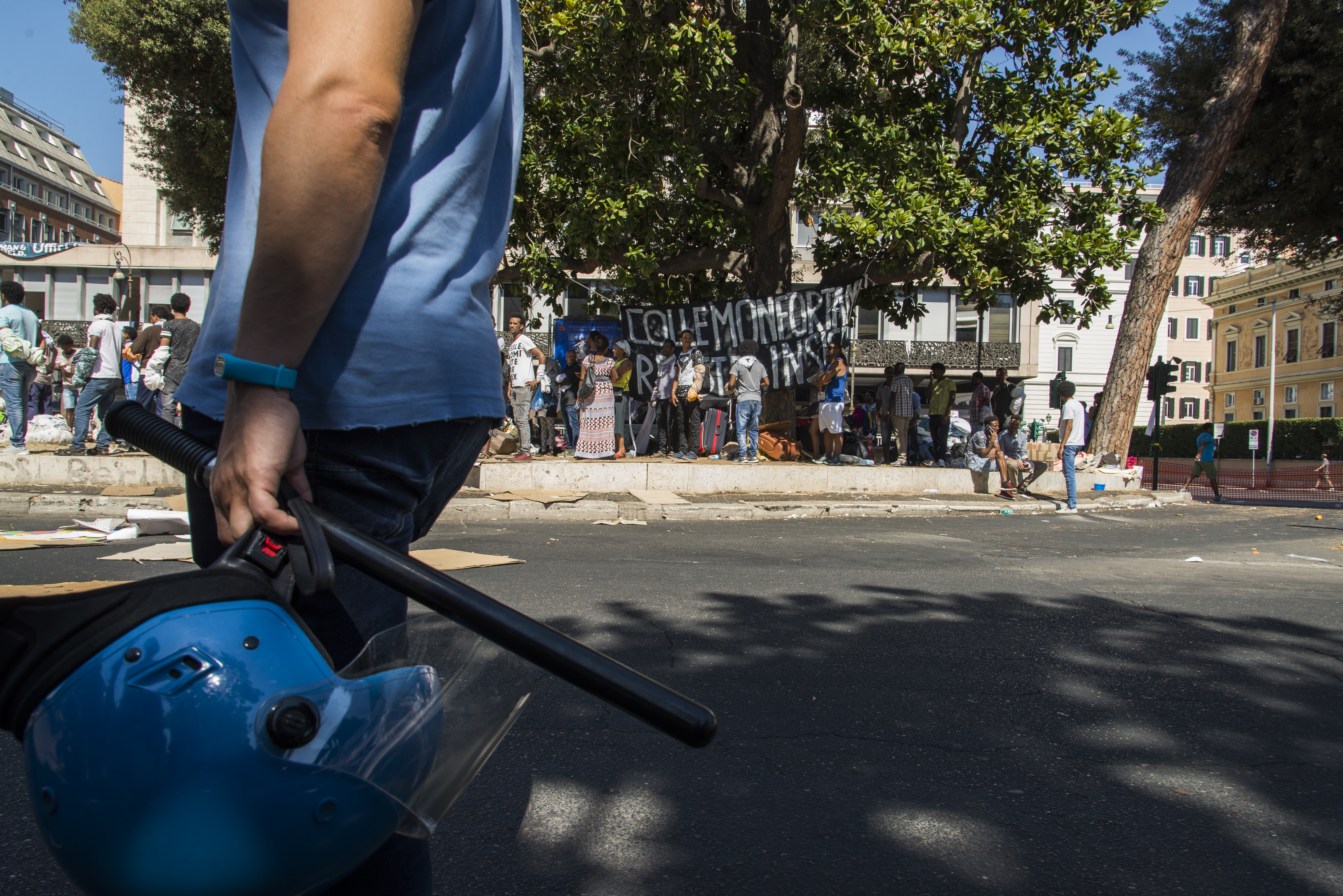 Police presence in the square a few hours before the square evacuation (photo: Federica Mameli)

The following morning at 6 a.m., however, armoured vehicles once again came screeching into the piazza in what even the very prefect of Rome, Paola Basilone, described as a “cleaning operation”. It felt like a kind of urban warfare: the police used water cannons and batons, the refugees responded by hurling objects at them, including gas tanks. There will be two violent charges, the second one later in the morning, on a group of women who were picking up their belongings in the piazza. According to MSF workers who provided first aid during the clashes, 13 people required medical attention and five were hospitalised. One of them, Gemma Vecchio, was not among the occupants, but is the president of Casa Africa, and she was on the scene as a mediator. On the night of the 24th, despite the day’s tensions, people were in the streets again. The city offered 80 places in two separate centres, but the refugees are not inclined to accept: not only because families would get separated (women in one centre, men in another), but also because the refugees have decided to merge their cause into that of the movements which have been asking the city for a proper housing plan. The new sit-in would last another week on the Piazza Madonna di Loreto, near the Fori Imperiali. The refugees here will be evacuated again twice, the second time on September 5th.

From the squats to the streets

“Where are we supposed to go?” Aster, 42, from Somalia, who has been in Italy for 14 years, keeps saying. “I didn’t come on a rubber boat,” she tells us, “but with a proper job contract. I left my children back home and I came here to be able to support them.” Fifteen years ago, Aster met a woman in Addis Ababa she calls “a special doctor”, a medical professional from Italy who worked in international cooperation. “I was recently widowed, I had three small children, and she suggested that I come here to work. Afterwards I would be able to bring them here,” she recounts. “The youngest twins were a year and a half old, the eldest was four. So I did it. I worked every day, I never took a single day off, I did everything: I was a cleaning lady, a caregiver, I even worked at a Gucci store in the centre. After all that hard work, in 2010, I managed to get my family reunited. I will always be grateful to Italy for it: now my children are with me.” Aster, however, also regrets not being able to give them a home. “I worked so much, but often illegally. For a time I was renting a house because I had a contract, but I lost that job, so I moved to Via Curtatone. But I would never have thought I’d end up in the streets, I am so ashamed. What I fear now is my daughter will never fulfil her dream of going to university. She wants to be a doctor, which would be wonderful.”

After the second evacuation on Piazza Venezia, Aster went to live in another squat, the one on Via Collatina in the capital’s suburbs, hosted by a friend. “The suburban squats make the occupants less visible,” 40-year-old Biniam, from Eritrea, who came to Italy in 2003, explains. He tells us he has also worked the most disparate jobs, from construction to peddling, but pending his asylum application he took Italian classes, and then enrolled in university, where he’s studying mechanical engineering. “I am only one exam away from graduating,” he says, “but I work at a market stand to support myself.” After the fourth eviction, Biniam went to stay with friends, but this time in a house. “They told me I could stay here so I wouldn’t end up on the streets,” he explains. “The people who lived on Via Curtatone are now living in different neighbourhoods: some have consented to temporary housing in reception centres, others are staying with friends, just like me, others still are living in squats. What we are asking for is some reliable arrangement, not a permanent one, but one where we can live decently: families would be separated in reception centres. And the older ones, like me, would be forced to give up their lives: some of us go to work at dawn, or at night, it’s just not compatible with they are offering us.” Biniam has been waiting for a month to retrieve the possessions he left behind on Via Curtatone: “All of myself from the last few years is there, including the reminders of my family: pictures, books, the gifts my father and sister gave me before I left. All of my life is in there.”

Social emergency and lack of integration

A few days ago a barbed wire fence was placed outside the entrance to the building on Via Curtatone to keep squatters out permanently. Meanwhile, the social emergency is far from over: overall, the City of Rome explained, 76 people have agreed to be housed in reception centres. City Councillor for Social Policy, Laura Baldassarre, has stated repeatedly that the city’s job is to provide assistance to the most vulnerable, prioritising women, the disabled, the elderly, and mothers with children. She has also reiterated that this issue “must not be exploited”: “I hope everyone who has a right to housing at our facilities will welcome our offers, without giving in to pressure from certain quarters more interested in gaining visibility on the streets than in finding actual solutions.” Human rights groups, on the other hand, still maintain that these are “shameful” measures. “These are temporary, unacceptable solutions,” the spokesperson for Rome’s Movement for the right to housing, Margherita Grazioli, said, “they do not have the least regard for these people. And the fact that all their belongings were loaded onto trash trucks is proof of that.” 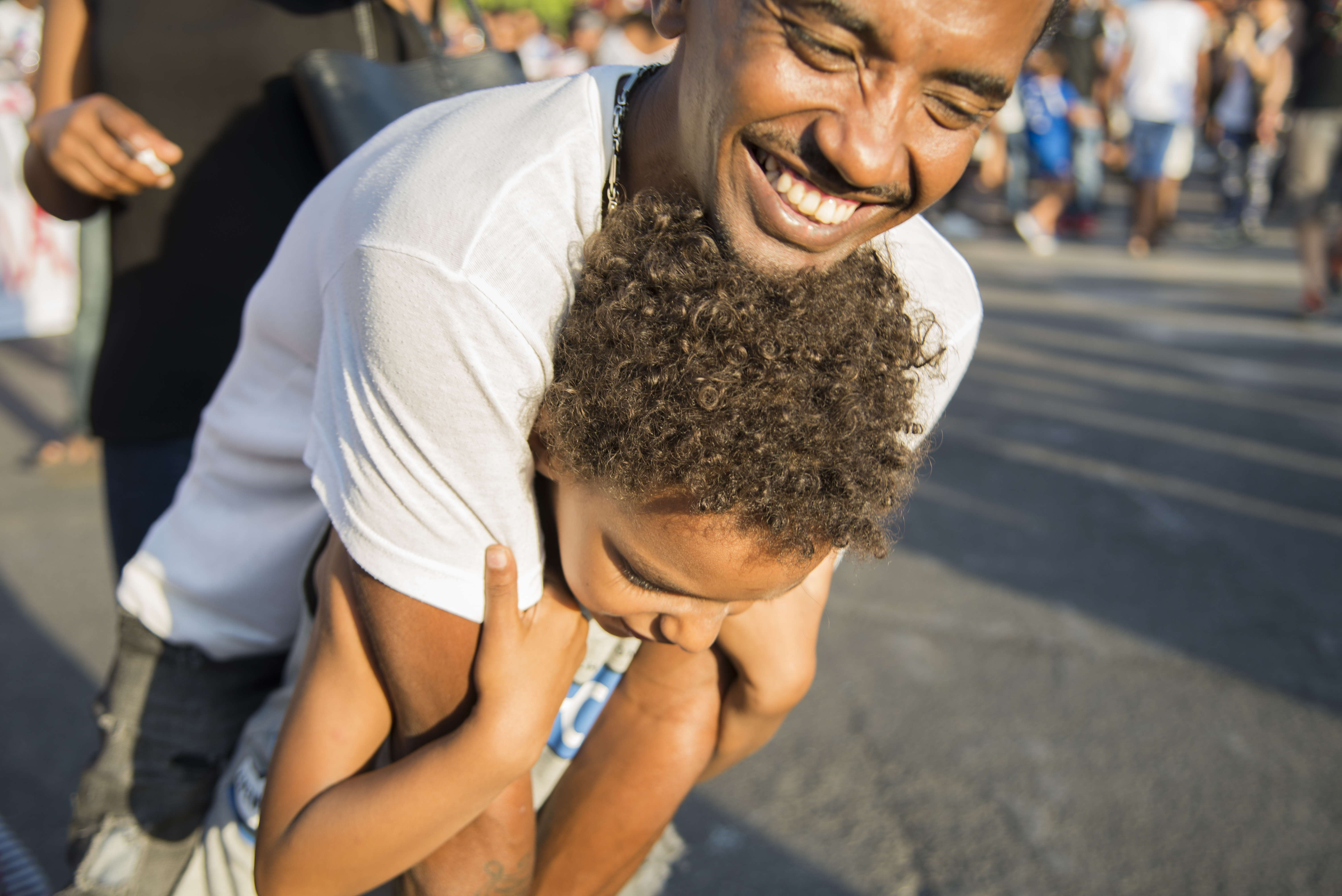 Father and son from one of the evicted families during the protest (photo: Federica Mameli)

“It’s not that we don’t want to start over,” Biniam says, “we’ve done it so many times before, at all levels; we are, however, asking for a solution that is respectful of people’s lives.” The Ministry of the Interior, for its part, has announced a few guidelines on evacuations (which will not be implemented in the absence of alternative solutions) and the approval of an “integration plan”. In the meantime, many people are still sleeping out on the streets, while some are being housed at the Baobab Experience activist centre, and others in the suburban squats. The UNHCR has called for a “concrete strategy of social intervention”: “The profound distress and marginalisation experienced by thousands of refugees, including many families with children, in informal settlements and occupied buildings have been a reality for many years now, which makes it imperative to enact a concrete strategy of social interventions in such contexts,” and has pointed out that, for several months, it has been urging the local and national authorities to “find an immediate solution for those who are currently sleeping outside, and provide adequate integration services to those entitled to international protection in Rome.”

Translation by Francesco Graziosi. Proofreading by Alex Booth.
Piazza Indipendenza, refugees preparing for a night on the streets after the evacuation (photo: Federica Mameli, as all pictures in this article)