Homepage >> Approfondimento >> EU-Turkey deal: the burden on refugees in Greece

April 11, 2018 - Marianna Karakoulaki
The statistic success of the EU-Turkey deal in lowering the influx of migrants to Greece also has another face, a far-reaching “crisis of solidarity”: desperate conditions for people blocked in camps on the Egean islands; what has been described as “a mental health emergency”; and the opening or reopening of more dangerous routes. Marianna Karakoulaki, who knows the island camps well and has travelled the Balkan route, takes stock for us from Greece of two years of EU-Turkey deal.

In November 2015 it was clear that the EU’s, and especially Germany’s, open-door policy for refugees was about to end. By the end of that month only people from three countries were allowed to cross the borders without consequences and reach their final destinations: Syrians, Iraqis, and Afghans. A few months later, in February 2016, even Afghans were excluded from that list. Still thousands of people kept arriving daily on the Greek shores of the Aegean islands. After months of rumours the EU’s answer to the large migration flows that arrived from Turkey came in the form of a “Statement of goodwill” between the Union and Turkey.

On 18 March 2016, the EU and Turkey adopted the EU-Turkey Statement, a non-binding document more commonly known as the EU-Turkey deal, designed with the sole purpose of deterring refugees from arriving to Europe.

What does the EU-Turkey statement say

The core of the EU-Turkey deal is a swap policy. “For every Syrian refugee being returned to Turkey from the Greek islands, another Syrian will be resettled to the EU taking into account the UN Vulnerability Criteria,” states the EU-Turkey Deal. In return Turkey will prevent sea crossings from its shores and the EU would allocate more than three billion euros, with an additional three billion at a later stage for refugees in the country. This agreement also meant that the EU would list Turkey as a safe third country for refugees; that the returns would not be considered as a refoulement, which is illegal under international law; and that EU bodies and the United Nations High Commissioner for Refugees would in turn monitor and follow up the cases of those who were returned to Turkey. Its goal was to limit if not altogether stop sea crossings, prevent deaths at sea and create a viable migration policy for the European Union – an experimental model that could possibly be repeated in other regions as well.

For those who waited in the Greek mainland just a few months before the EU-Turkey deal, the EU introduced the emergency relocation mechanism in an attempt to unburden Greece and Italy of the thousands of people who arrived daily. With that mechanism EU countries had agreed to relocate around 98,000 refugees from Greece and Italy; yet the scheme had an expiration date. The EU stopped relocation on 26 September 2017, though those who arrived by that day could be still eligible for the scheme. From October 2015 until October 2017, only 31,503 refugees were relocated from Greece and Italy. 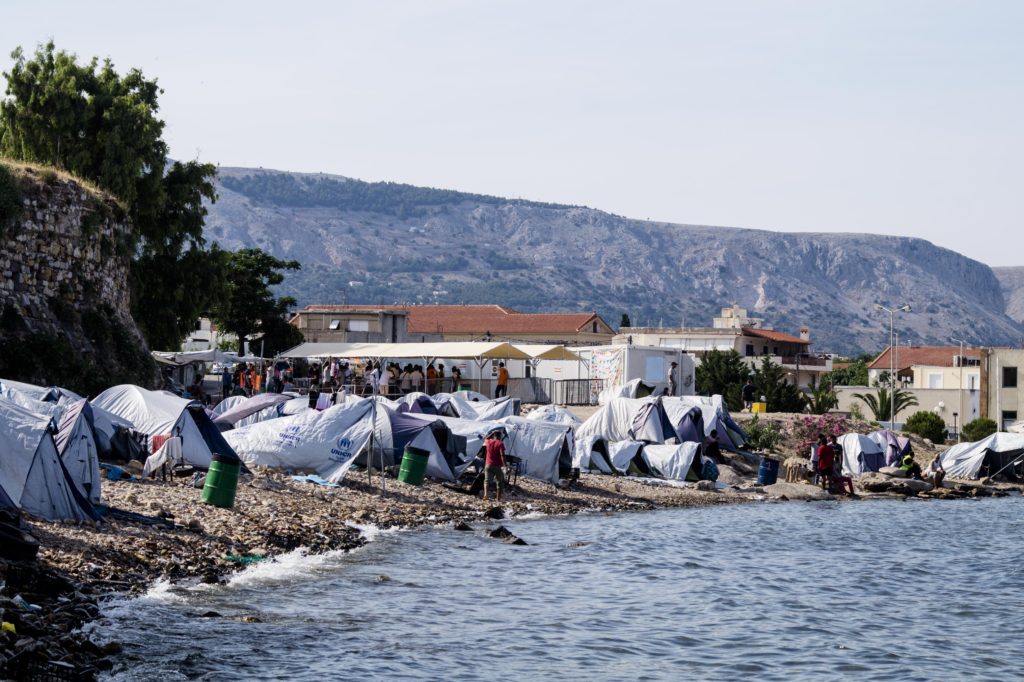 This March, the EU-Turkey Deal celebrated its second year of implementation and official statistics show that it works. While in 2015, 856,723 refugees arrived in Greece, in 2016 arrivals were only 173,450 and in 2017 the numbers were remarkably low, as only 29,718 people reached the islands of the Aegean. At the same time, the death toll at the Eastern Mediterranean route is seemingly low. In addition, 2,177 refugees were sent back to Turkey from Greece under both  deal and the bilateral protocol between Greece and Turkey. Finally, as of March 2018, 12,778 Syrian refugees have been resettled from Turkey to several European countries, with Germany and the Netherlands accepting the largest numbers of people.

Compared to what numbers suggest, what is happening on the ground is a whole different story.

“The reality is much different to Europe’s narrative on the EU-Turkey deal,” Louise Roland Gosselin, Médecins Sans Frontières’ Head of Mission in Greece, tells us.

One of the consequences of the EU-Turkey deal was a geographical restriction for those who arrived on the islands after 20 March 2016. Under the EU-Turkey deal, those subject to it are restricted within the island where they arrive. Those under geographical restriction are required to remain in the islands facilities until the full registration of their asylum claim. To a large degree this restriction is responsible for the dire conditions that refugees face on the islands’ main governmental facilities. Since the deal came into effect, those who reach Greece through the Aegean Sea in an irregular manner can log their asylum requests at the islands’ hotspots – the identification facilities that were created to register and fingerprint refugees. Once they do claim asylum, they wait until their decisions are delivered by the Greek asylum service. Slow asylum procedures, however, and constant arrivals – even in smaller numbers – mean that not everyone can live inside the hotspot; or if they do, they are crammed in tents or small containers.

“People are in absolute despair. The reception conditions are still catastrophic. People will end up living in tents or 25 people in one container, including children that are getting sick again and again and again because they don’t have enough fresh air and they are not protected. Parents can’t keep their children clean and healthy. Hundreds of people have to use the same toilets or shower that are not being adequately maintained. There have been some improvements, but we still have double or more the capacity of Moria,” adds Louise Roland Gosselin. Moria is the most crowded hotspot in the Greek islands of the Aegean. In total, the islands currently host more than 13,500 refugees, while their capacity, in hotspots and other facilities, is less than 9000. Lesvos for example hosts more than 7,400 people, 5,404 of whom live in the hotspot of Moria which has a capacity of up to 3000.

NGOs and other actors who are active on the ground called out the EU-Turkey deal for the abysmal conditions it has created. Although refugees are not locked in detention centres, geographical restrictions as well as the deteriorating conditions of the hotspots have created a vicious cycle for those who live there. People are free to move around the islands, yet the conditions they live in and the limited options they have are red lines for their wellbeing.

Riots and violence are constant in almost every hotspot of the Greek islands, but mainly to those that are way over their capacity. After a riot broke out recently in Moria, MSF, who keep an emergency clinic outside the camp, treated 20 people including a six month-old baby who suffered from tear gas inflammation and panic attacks. But riots is only one side of what is happening to Moria. The most devastating consequence of the deal is the effect it has on people’s mental stability: MSF have characterised the conditions on the Greek islands as a mental health emergency. 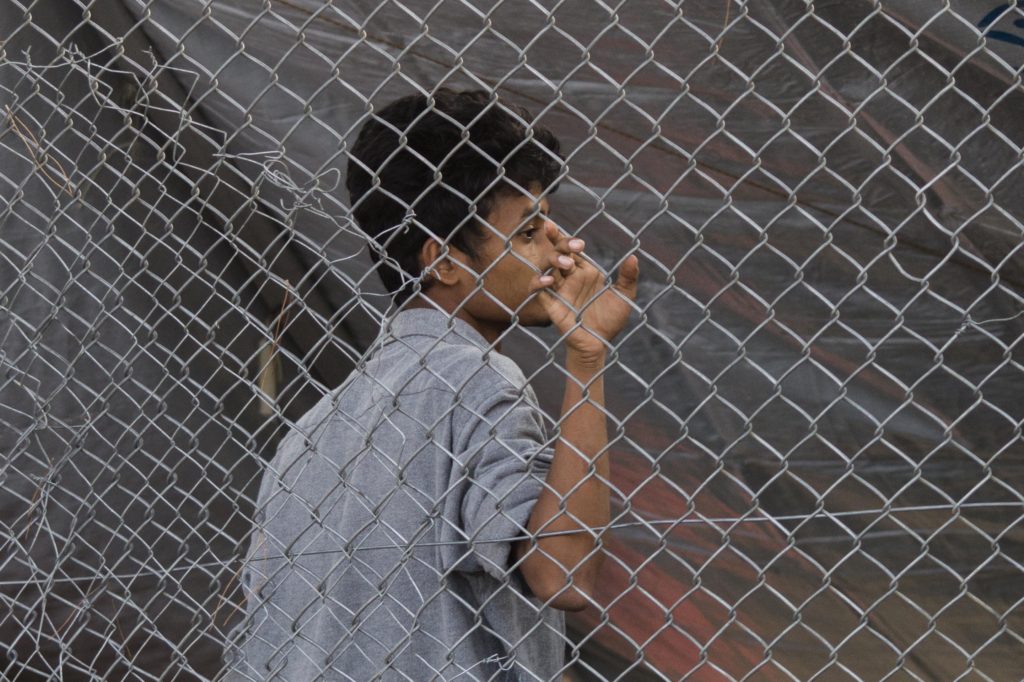 A refugee grabs the fence of the hotspot of Moria in Lesvos in September 2016 (photo: Marianna Karakoulaki).

According to the MSF report,  the conditions on the Greek islands and exposure to violent conditions including the fear of being sent back to Turkey do not only bring out people’s traumatic experiences but also create new trauma which deteriorates their mental health. Greece’s slow and complicated asylum system which is affected by the large numbers of people who claim asylum in the country leads to desperation. Just a few days ago, following the visit of Dimitris Vitsas, Greece’s minister of migration, Greek media reported that a Syrian refugee set himself ablaze due the rejection of his asylum claim. Such events are not sparse.

One the biggest failures of those who designed the EU-Turkey deal was their misconception that such an agreement would target and eradicate smuggling. Smuggling was indeed limited on the Eastern Mediterranean route; the land border crossing between Greece and Turkey through the river of Evros, though, an old and more dangerous door, reopened. There are daily reports of people trying to cross through the river, reports of people being found dead, reports of people left abandoned in the middle of nowhere, and even serious allegations of refoulements – an illegal action based on international law.

At the same time, the Balkan route is still open and thriving under Europe’s shut eyes.

For Mohammed – not his real name – an Algerian who fled his town to get away from a terrorist organisation that was trying to recruit him, the moment he would be able to leave from Greece was a matter of luck and timing. When he arrived in Lesvos, he stayed in a forest behind the hotspot of Moria; a few days later he hid in a truck which took him to Chios. Three months later he managed to hide in another truck and reach the mainland. He attempted to leave from Greece more than ten times from several routes. Once he did, he was stuck on the Serbian-Croatian border, where we met him in November 2017.

“My story cannot be told in two minutes. It’s a story of being an immigrant for two years,” he said apologetically after he explained how he jumped from one border to another and the violence he endured under the shadows of the EU.*

The EU-Turkey deal has been hailed as a success due its statistical achievements, yet the deteriorating conditions on the Greek islands can be characterised as a humanitarian disaster taking place on the shores of Europe. Europe’s insistence on the fortification of its border regime has led to a securitisation of the migration narrative, that sees those who seek refuge as a threat. The majority of refugees who are currently in Greece, however, have fled from neverending conflicts and oppressive regimes. When they arrive in Greece, they are stripped of their dignity and face Europe’s inability to adopt humanitarian migration policies.

“There has to be a humanitarian response to people’s needs. I think that clearly the EU-Turkey deal is not only a failure, but it is also violating people’s fundamental rights. People should move to the mainland; if they have a right to receive asylum, they should have that in Greece or to another European country,” Louise Roland Gosselin says.

What is happening in Greece since 2015 has been characterised as a refugee crisis. The EU’s response to it, with the EU-Turkey deal as its model migration policy, leads to the conclusion that there is a solidarity crisis that could lead to even more suffering for those who have no other option but to flee.

*Parts of this quote has been edited for clarity

Cover image: Refugees walk in front a tent set by MSF at the makeshift camp of Idomeni in May 2016 (photo: Marianna Karakoulaki like all images in this article).