Homepage >> Approfondimento >> Migrants in Libya, trapped between war and Covid-19

May 5, 2020 - Nancy Porsia
Since the beginning of April, thousands of men, women and children trapped in Libya have been put at sea heading towards Europe. Estimations say that around 800 migrants left the Libyan shores in the second week of April alone. While the government in Tripoli sent thirty doctors to Italy to contribute to the fight against Covid-19, Italy and Malta declared their ports “unsafe” due to the health emergency, closing their borders to migrants on the Central Mediterranean route. Meanwhile, official detention centres refuse migrants, while dungeons run by militias have their doors wide open. Reporter Nancy Porsia describes what it means to be trapped in a country at war during a pandemic.

“I read about the thousands of deaths in Europe for coronavirus. It is a tragedy. However, I would rather get sick there than here in Libya,” says a young Senegalese from Zuwara, Libyan town at the border with Tunisia. “Yesterday evening some men came to pick me up, together with three more migrants, and they brought us to a place near the border. We were asked to unload some boxes. I believe it was weapons” says the man, who has been falling asleep to the sound of gunshots for days now. In the past days, a handful of kilometres east from the complex where migrants live in the Berber town, troops siding with Fayez Al Serraj’s government have achieved one of the most important recaptures since the beginning of General Khalifa Haftar’s offensive on Tripoli and the surrounding area. Pepe has made up his mind: “I am waiting to be paid for a job I finished, then I will leave. Because even if I manage to survive the war here, I will die of the virus.”

Numbers of Covid-19 victims are still low in Libya; around 50 confirmed cases, eleven of which in intensive care, and one death, according to the National Centre for Disease Control. However, numbers are destined to increase, despite the curfew imposed by Tripoli’s government for the entire national territory, or at least the territory under its control in Western Libya. The efforts of Al Serraj’s government can do little to face an ongoing sanitary crisis, where local hospitals have been short of basic medications for years and whoever needs treatment has to purchase medications outside. After five years of civil war between General Khalifa Haftar’s troops and the militia coalition in Tripoli, what is left of the Libyan healthcare system is further hindered by General Haftar’s air bombing, which recently hit the Al Khadra hospital in Tripoli. The hospital had just been designated by the Government of National Accord as the main structure to admit coronavirus patients in need of intensive care. Furthermore, one of Haftar’s men, Hassan Ali Al Gaddafi, major of the village of Shweirif in the Libyan desert, ordered to close the network of the Great Man-Made River to take revenge for the detention of his brother in Zawiya, a town west of Tripoli. As a result, in the middle of a health emergency, the country was left without running water for ten days.

“It is 468 of us here, and there are already 130 confirmed cases of scabies. Nobody is talking about coronavirus among the guards, and not even among the local staff of Doctors without Borders” writes on WhatsApp Solomon, from Eritrea, held in Zintan’s jail, on the Nafusa mountain in western Libya. “If the virus gets here, it is going to be a massacre” says the man, a prisoner since 2018. Efrem, his wife and their four children have been transferred from one detention centre to the other in Tripolitania for four years, and only this past February they were freed from Zawiya’s jail. “For some days I managed to find some job and get food for my children, but since mid-March with the curfew I cannot even go to the store to get materials” says the man, coming from South Sudan. “I will have to pay the rent in a week. And I really do not have the money. Meanwhile, our food stocks are running low,” he concludes.

“Traffickers in the south are not letting migrants in, because they fear the spreading of coronavirus,” says a source close to the military in Tripoli. However, for the tens of thousands of migrants already in the country, the sea route stays open. “Of course, there are complications on the way towards the Tunisian border. Between Sabrata and Surman there are important pockets of groups faithful to Haftar. But somehow we manage, and in the end we are able to still take migrants to boarding points,” one man involved in the traffic of travels by sea explains. The man is actually an official of the Directorate for Combatting Illegal Migration (DCIM) of the Ministry of the Interior, cooperating with traffickers. “Sometimes we put them on a DCIM bus so we can avoid problems at check-points” he reveals.

Thousands of men, women and children trapped in Libya have been put at sea heading towards Europe since the beginning of April. Estimations say that around 800 migrants left Libyan shores in the second week of April alone. While the government in Tripoli sent thirty doctors to Italy to contribute to the fight against Covid-19, Italy and Malta declared their ports “unsafe” due to the health emergency, closing their borders to migrants on the Central Mediterranean route. 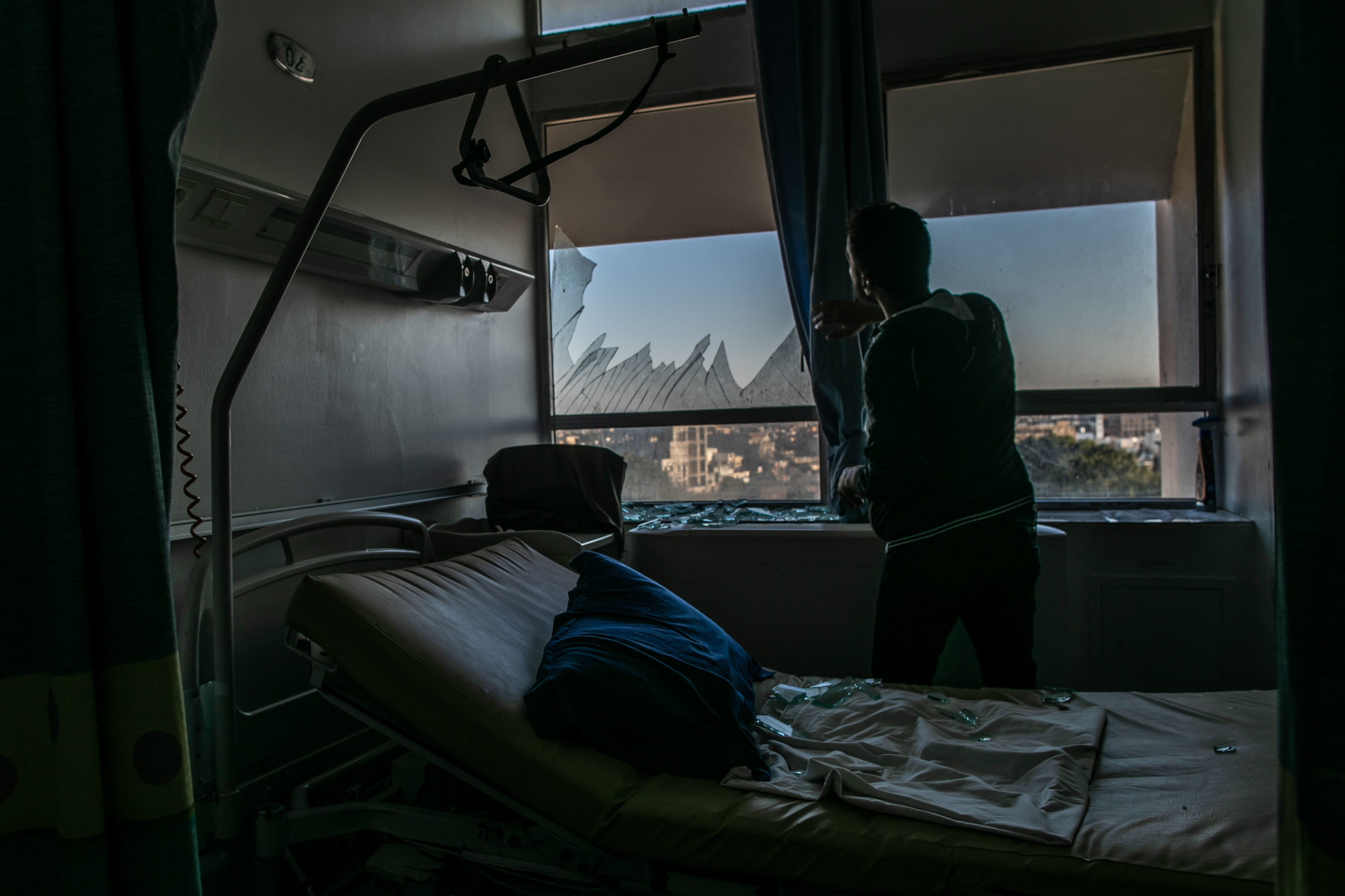 Tripoli, April 6, 2020 – A healthcare operator checks damage in a patient’s room at Al-Khadra, one of the main hospitals in Tripoli, after tens of missiles of the Libyan national army hit the structure. Photo by Amru Salahuddien

Two boats were rescued by the Alan Kurdi ship of the German NGO Sea Eye, which was the only one sailing close to Libyan shores at the beginning of the month. During Alan Kurdi’s operations, the men of Coast Security from Zuwara almost rammed the boat with migrants on board, and then shot into the air. “We were the ones sending the Coast Security” said an officer in the Security Direction of Zuwara. “Stopping dinghies with irregular migrants is our order, and we comply,” he declared. Libyan authorities try to fulfil the agreements signed with Rome and Brussels on cooperation against illegal migration, even though everyone has their own reasons. Some see an opportunity for one of the most lucrative businesses available at the moment, some want the right to ask Italy and Europe to return the favour in other contexts, and some others just want to honour their word. The EU secured cooperation with Libya on this issue, pretending not to see the systematic abuse on migrants in Libyan jails, including those managed by Tripoli’s Ministry of the Interior, as well as the widespread practice among militias of using migrants as human shields in the civil war that has been flogging the western part of the country for a year. Coronavirus, this tragic, unpredictable and unimaginable event until a few months ago, is turning tables. Directors of detention centres in Tripoli refuse to accept migrants intercepted and brought back to Libya by the Coast Guard. After surviving a bombing on Tripoli’s harbour during docking, 280 migrants intercepted by the Libyan Coast Guard in mid-April and transferred on the Ras Jader tugboat, were forced to spend one day and one night in a hangar at the port. “No-one of the DCIM detention centres in Tripoli was available to accommodate them. All because of fear of the disease,” says an official of the Supreme Committee for Combating Covid-19.

“We saw many planes flying over us, we asked for help, why did they leave us at sea?” a woman asks crying. She survived a long shipwreck and unloads on the phone with human rights lawyer Giulia Tranchina, based in London. Alarm Phone, a platform for boat rescue, has collected requests for help from the dinghy in distress for days, transmitting them to Italian and Maltese authorities. The European Border and Coast Guard Agency had two planes monitoring the central area of the Mediterranean at that time. Malta and Italy did not reply to help requests, hiding behind the Covid-19 emergency. “Four more people threw themselves into the water on Monday night, they were desperate” said another survivor at the DCIM centre in Trik Al Sikka, Tripoli. It was only five days later that a Libyan fishing boat reached them and brought them back to Libya. “I would have preferred to die at sea as well, if I knew they wanted to bring us back” the woman continues. “They were rescued in the Maltese search and rescue area” states the International Organization for Migration, whose staff is working in different harbours on the Libyan coast. “We need urgent solutions, because Libya is not a safe port”.

The dungeons were migrants end up

Of the 280 migrants intercepted and brought back on the Ras Jader tugboat on April 9, some escaped. This is what Libyan authorities declared when they counted the migrants. “It is common practice to free migrants from DCIM centres,” a military source from Tripoli says. “Even directors of the centres do not know how to manage migrants with the ongoing war. And now with coronavirus…” the source continues.

While official detention centres refuse migrants, dungeons run by militias have their doors wide open. Some of the people brought back to land on April 9 were allegedly transferred to an abandoned tobacco factory in western Tripoli, today an investigation centre of the Sawa’iq militia from the town of Zintan. There is no trace of those migrants in the official registers in Tripoli, which only account for the people hosted in DCIM centres.

Since last fall, hundreds of migrants intercepted at sea have been transferred to Al Khoms, about 100 km east of Tripoli, in the Souq Al Khamis jail. This is one of the three DCIM centres that were officially closed by the Minister of the Interior Fathi Bashaga after the bombing by Haftar’s troops on Tajoura’s migrant detention centre last July, when around 50 inmates died. “Nobody knows what happens to migrants there. One thing is for sure, though: the Government has no control whatsoever,” states an international analyst on Libyan security.

According to data provided by Tripoli, around 1500 migrants are in jails controlled by the Ministry of the Interior at the moment. “It is the lowest number registered since October 2019,” as can be read in a note by IOM. Such data is in clear contrast with the high number of boats intercepted by the Libyan Coast Guard. Since the beginning of 2020, at least 3200 migrants have been brought back to shore by their officials.

“Drugs, weapons and jails for migrants are businesses reserved to the militias controlling ministries in Tripoli,” says a diesel trafficker from Zawiya. “It is not like selling diesel at the Tunisian border,” he concludes.

Cover: Tripoli, April 14, 2020 – Libyan medical staff helps a healthcare operator to try on protective gear. We are in a fashion school turned into a workshop for the production of protective equipment to be delivered to local hospitals treating patients infected by Coronavirus. Photo by Amru Salahuddien.