September 24, 2019 - Marianna Karakoulaki
In August alone, 102 boats landed on the island of Lesbos and more than 2,800 people were assisted. Thousands more people were received in the Moria camp, already collapsing - it is hosting more than 10,000 people compared to the 3,000 places - which put the already critical conditions of migrants to the test even more severely. The health crisis, the new Greek plan for immigration and the harmful effects of the agreement between the EU and Turkey: Marianna Karakoulaki tells us about the situation on the island.

In 2016 the EU and Turkey agreed on working together in limiting the number of refugees who reach Europe through the islands of the Aegean in Greece. Since then the EU-Turkey Statement along with the Hotspot Approach which was tried in Italy became the EU’s main migration policy implemented in Greece and reduced the number of arrivals remarkable. However, both the Hotspot Approach and the EU-Turkey Statement created an unprecedented situation in Greece.

The Hotspot Approach, which was first introduced in 2015, provides emergency assistance to the countries that receive a high number of refugees through the creation of reception and identification centres (RICs). In Greece at the moment there are five such open centres on the islands of Lesbos, Chios, Samos, Leros, and Kos, and a closed centre near Orestiada in North Eastern Greece. In turn due to the EU-Turkey Statement refugees who arrive on the islands of the Aegean should apply for asylum there and wait until their application is processed. These two policies have created a geographical restriction in Greece as refugees, apart from certain cases, are not allowed to move to the Greek mainland or leave the islands where they have initially arrived. Even though the EU-Turkey Statement was designed in a way that would curb migration in the Aegean it created a backlog of asylum applications in Greece, hellish conditions for those who live in the hotspots, and refugee camps that are closer to open air prisons rather than receptions centres.

Despite a reduction in the number of refugees who reached the island of Lesbos, recent month were surprisingly busy. In August 102 boats arrived on the island while according to the NGO Lighthouse Relief that is active on the northern part of the island, they assisted more than 2800 people. Data available from the Aegean Boat Report, a social media page that monitors daily arrivals in the Aegean, revealed that this trend continues through September. During the first week of September, 2302 people arrived in total to the Greek islands, 886 of whom in Lesbos. Currently the vast majority of people who arrive in Greece by sea, including on the island of Lesbos are from Afghanistan and Syria followed by the Democratic Republic of the Congo and Palestine.

Refugees who arrive in Lesbos usually land in the southern part of the island near the airport of Mytilene or in the northern part near the village of Petra and Skala Sykamineas. Refugee Rescue, an independent search and rescue organisation that was formed several years ago by volunteers who were in the Lesbos operates one rescue boat and in some cases assists the Greek and European authorities. According to Finn Sands Robinson, Refugee Rescue’s field coordinator, there has been a significant rise of arrivals in the north, however, “the situation in Lesbos has always been unpredictable,” due to the political and geopolitical situation in the area. 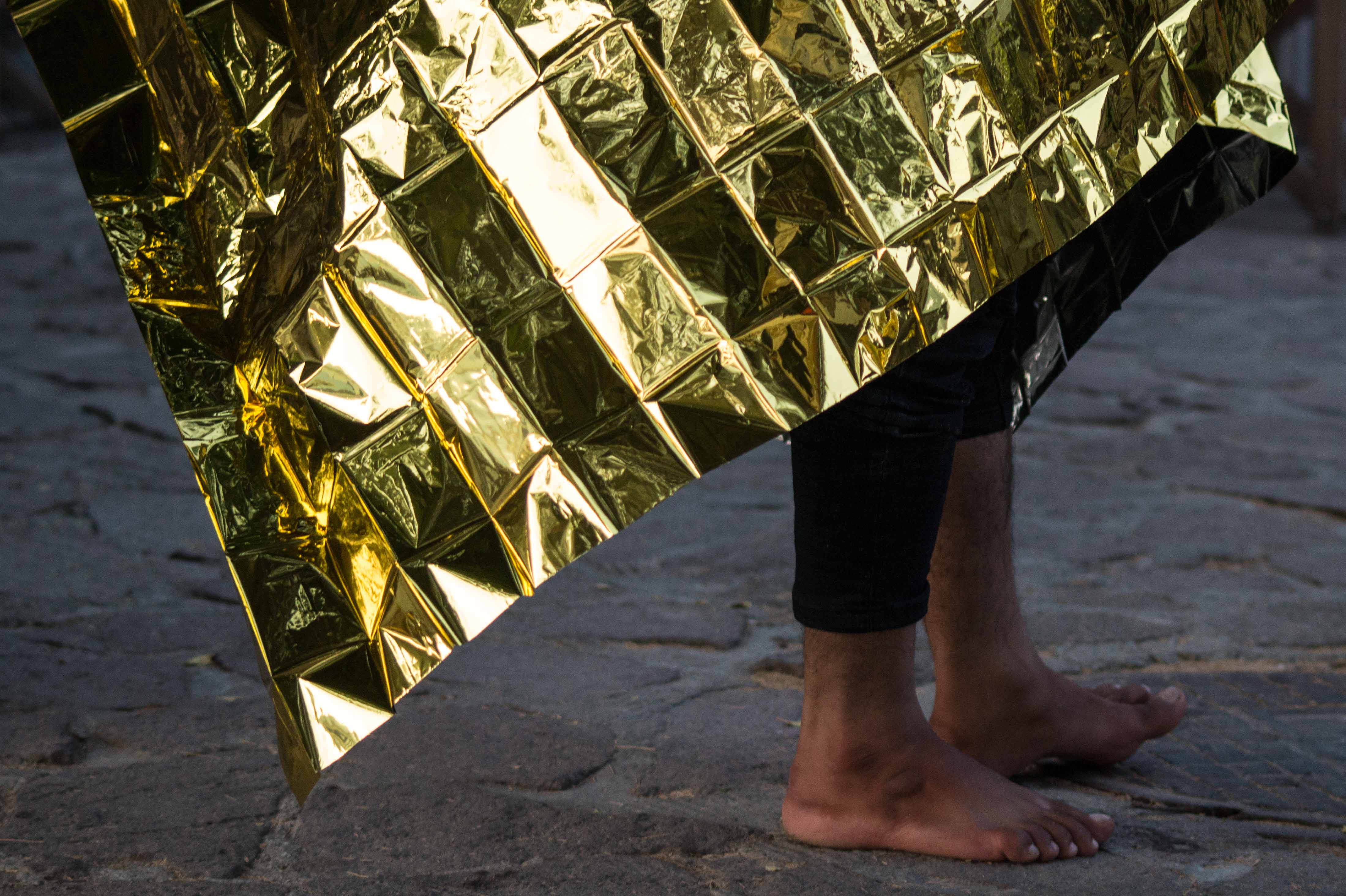 An Afghan refugee without shoes on his way to the coastguard’s van that will take him to Stage 2 camp (photo: Marianna Karakoulaki)

“We have spotters who are scanning during the day for boats and then we have volunteers and coordinators present in the Stage 2 transit camp, the facility where people are brought to immediately after the rescue or disembarkation, and it’s somewhere where distribute non-food items, tea and water, and it’s somewhere where we really want to encourage a safe environment where people can relax after such a traumatic crossing,” says Finn Sands Robinson

However, according to Refugee Rescue and Lighthouse Relief, another independent organisation active in the area, due to the rising number of arrivals recently people stay in the transit camp longer than usual. Once people leave from the camp they are taken to the hotspot of Moria, Greece’s most overcrowded refugee camp where their asylum process starts.

Moria is overflowing. As of September 13, Moria was the ‘home’ of 10537 people, while it can only host 3000. The majority of those live around the main facilities in what has become known as the olive grove. Thousands of tents surrounded by olive treas are spread in the uphill where the hotspot is built. The facilities for those who stay in the olive grove are below any humanitarian standards. People wait in lines for most of the day in order to access food, toilets, bathrooms or even water.

Mostafa* arrived in Lesbos in August after fleeing conflict in Afghanistan. He tried to reach Lesbos twice, he describes the first time as a shocking experience as water starting flooding the boat. The second time he succeeded.

“Moria has many problems. We have no electricity and the food is not good. Sometimes we walk to Mytilene which is more than 1 hour on foot from here because we don’t have enough money for the bus,” he says.

Mostafa lives with ten more people, his extended family, in one tent. Mostafa’s cousin agreed with him about the living conditions in Moria but added that he wanted to live in Greece.

“I want to stop fleeing. I know how difficult the situation is for the Greek economy and the people here, but if I find a job and settle here, I will stay here. I speak Dari and English, I can learn Greek,” he added.

Moria’s horrid living conditions have created a healthcare and a mental health bomb for refugees. The camp has been left with only one doctor as the contracts for the staff who worked inside ended and were not renewed. The clinic that Doctors without Borders (MSF) operate Moria’s main entrance is overwhelmed with patients and can only look at those who are extremely vulnerable. 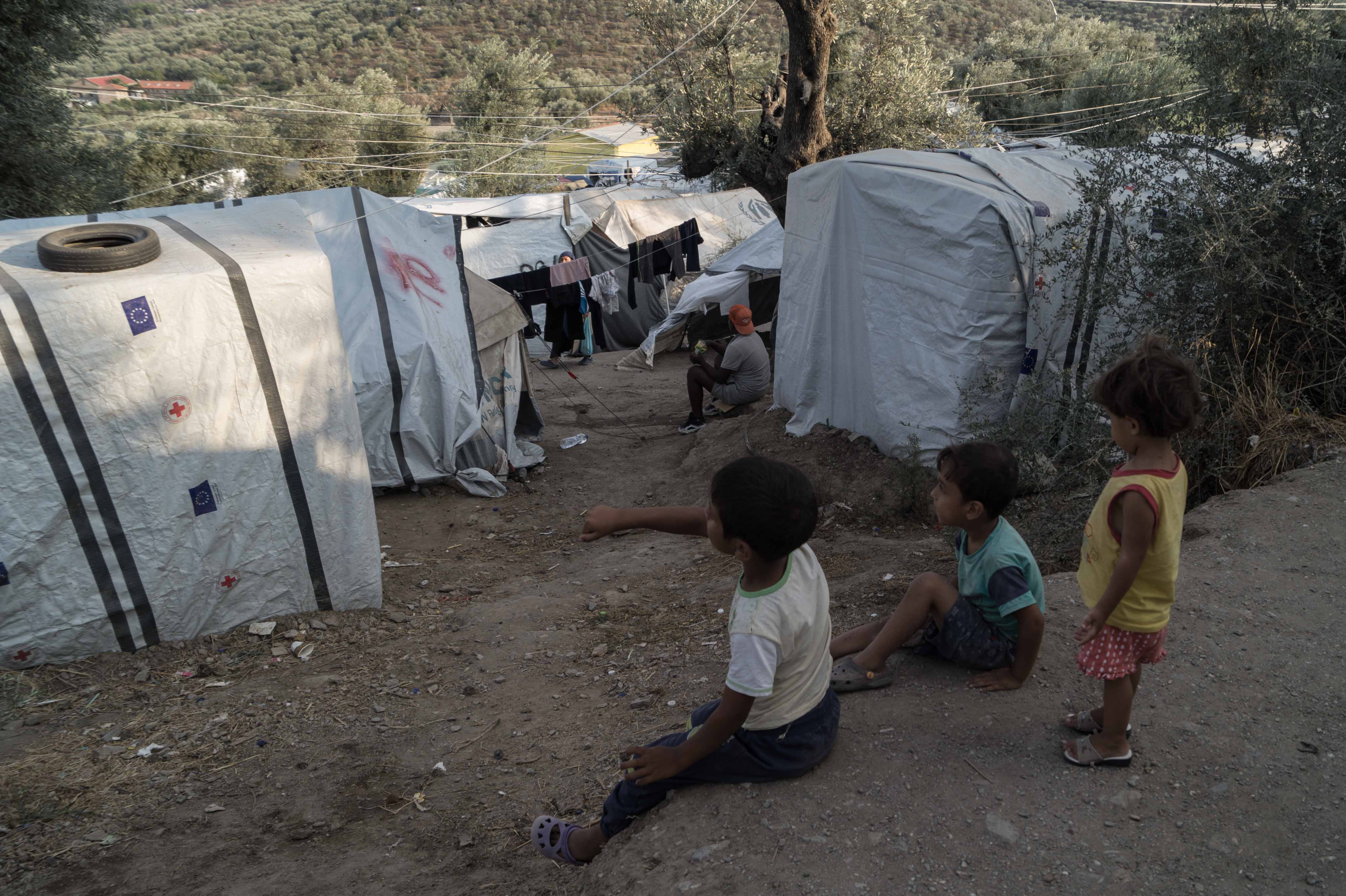 Katrin Brubakk also added that there is a rise in suicide attempts among adults as well as children.

On August 31, the Government Council for Foreign Affairs and Defence, under the auspices of the newly elected Greek Prime Minister, called for a meeting in which they discussed the sudden rise of the number of refugees who arrived in the Aegean islands. Following the meeting Kyriakos Mitsotakis, Greece’s new Prime Minister announced seven measures that will be taken immediately and included the decongestion of the islands; the transfer to the Greek mainland of 116 unaccompanied minors who are waiting to be reunited with their families elsewhere in the EU; the increase of border patrolling and surveillance in collaboration with FRONTEX and NATO; the change of the institutional legal framework of granting asylum by abolishing the second stage of appeals; the increase of police searches on the islands and the mainland for the identification of asylum seekers whose asylum has been rejected; the immediate supply of 10 small flexible boats which will respond in cases of people smuggling; and finally the support of local communities by empowering infrastructure.

The Government’s new plan, however, has been widely criticised by human rights organisations including Amnesty International. More specifically in an interview Gabriel Sakkelarides, Amnesty International Greece Director said that the government’s new migration plan “ignores the country’s basic obligations and poses serious risks of sanctions, human rights abuses and even greater asylum-related malfunction,” he also noted that Greece should not resort to violent refoulement. In reference to the announcement of the abolition of the second stage of appeals the Greek Refugee Council in a press release that “the provision of a second-instance examination of asylum applications is not a Greek specificity but an obligation laid down, for all EU Member States, directly by EU law” and such an action will violate international law.

The government’s new plan indicates that Greece will follow a stricter and more restrictive refugee policy. The abolition of the second stage of appeals amounts to violation of international and EU law which could potential lead to a conviction by the European Court of Human Rights. At the same time the increased patrol of the Aegean Sea in an already overly militarised area showcases the Government’s refusal to consider the refugee crisis as a humanitarian crisis; something that aligns both with the previous government’s approach as well as the EU’s approach to migration. The majority of those who arrive in Greece and are stuck in Moria and the rest of the hotspots come from conflict zones. By imposing restrictive policies is similar to ignoring their rights as refugees.