April 7, 2017 - Sara Manisera & Arianna Pagani
Nabil, Walid, Wissem, Hamza, Ghassem, Samah, Housemdine: these are names, not numbers. In words and images, Sara Manisera and Arianna Pagani tell us the stories of the Tunisian women seeking truth and remembrance for their sons and husbands who have disappeared while attempting to reach Europe.

On the road from Tunis to Bizerte, Quirtami starts to sing a love song. It is about a woman, as sensual as a doe, who is the object of a man’s passion, a man who has left for an unknown destination. “There are many songs about migration in Tunisia,” she explains with a melancholy smile, “because many are those who left never to return.”

Quirtami’s husband left for Italy on March 29, 2011, along with five other men from Sidi Mansour, a small town in the Sfax governorate, only 180 kilometres away from the Sicilian island of Lampedusa. An almost imperceptible distance for those who were dreaming of Europe, breathing the air of the revolution, and longing for a better job and a different life. Quirtami has not heard from him since.

“We are poor,” she says unapologetically. “And my husband wanted to find a job and earn more money for our children because they, too, want designer shoes, a cell phone, and all the things that you young people are after,” she continues in a voice that sounds like a reproach against the demands of modern youth.

The self-immolation of street vendor Mohamed Bouazizi on December 17, 2010, in response to the confiscation of his wares by a municipal official triggered a series of protests across Tunisia. The revolution led to the fall of Ben Ali’s régime on January 14, 2011. During the revolution and demonstrations, which were brutally repressed by the police, thousands of Tunisian citizens attempted to cross the Mediterranean. According to a research report by the Migration Policy Centre combined with data from the Ministry of Interior, 29,685 unauthorised Tunisians arrived in Italy by sea in 2011 alone, and 35,000 between 2011 and 2012. Among those, more than five hundred are missing.

Nabil, Walid, Wissem, Hamza, Ghassem, Samah, and Housemdine are only some of the 584 missing young men. Most of the mothers never heard from them again; others have recognised their sons in news programme footage and newspaper pictures, but all of them are now seeking the truth.

“If he’s dead, I accept it; it’s the will of God. But we must know what happened. We are not asking for money or assistance, we just want the truth,” Souad Rouahi repeats stubbornly, sitting in her son Ghassem’s bedroom. “Tell us where our children are. With today’s technology, they can find out whether our children are dead or alive,” she reiterates firmly.

Two more mothers, Faouzia and Jamila, are in the living room of her house. Together they have made couscous and other Tunisian delicacies. Despite having been united by tragedy, their looks are full of affection and understanding. Their children left together on April 29, 2011, and have since disappeared. 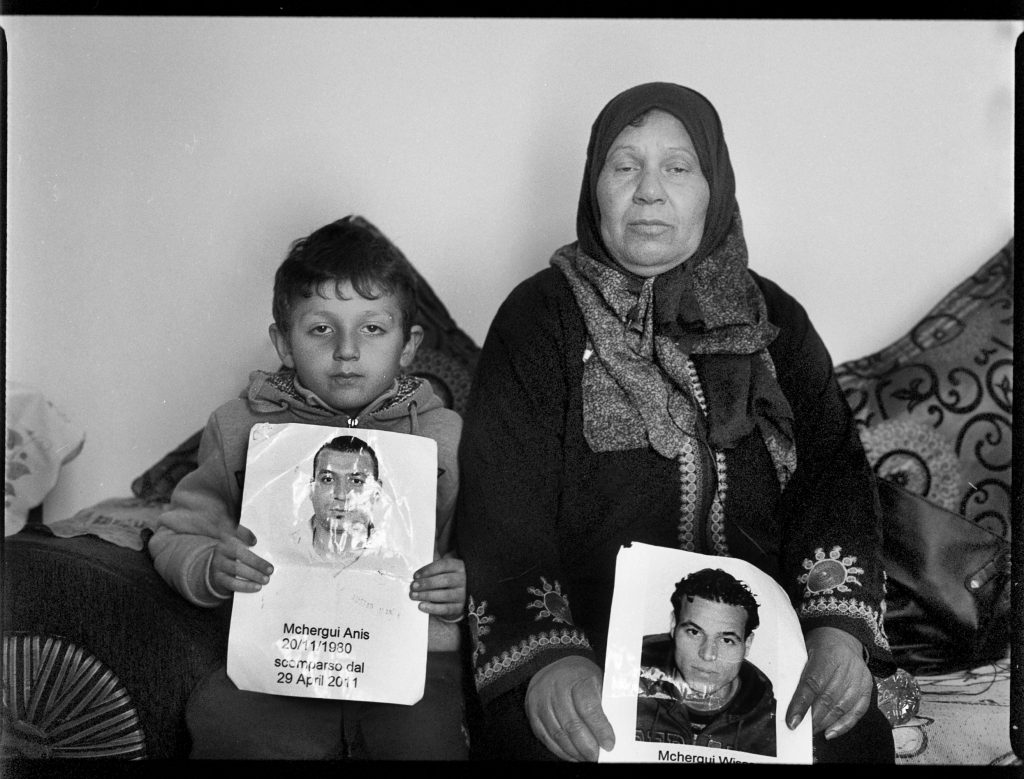 Bizerte, 2017. Faouzia, a Tunisian woman and mother. Since 2011 she has been desperately trying to find out what happened to her son, Hamza, who left for Italy in April that year. Prior to the revolution Hamza had been living in France for five years, but after returning to Tunis, he had not been able to re-enter Europe legally.

For the past six years the Tunisian women and their families have come together to picket the Italian Embassy and the Ministry of Social Affairs several times and to found numerous organisations: Ardepte (Association pour la recherche des disparus et encadrement des prisonniers tunisiens à l’étranger), La Terre pour Tous (Land for All), Mères des disparus (Mothers of the Disappeared). They have collected information, data, and fingerprints and amassed a dossier with the names of all the men who have disappeared.

Some of the organisations, such as La Terre pour Tous and Ardepte, have contacted and subsequently collaborated with some Italian and European ones: Carovana Migranti, the Venticinque Undici group, and the anti-mafia association Libera, which was founded by Father Ciotti. Together they have launched an initiative called “Mediterranean Memories” to raise public awareness on the subject of remembrance, the need to give a name to those who have died in the Mediterranean, and the issue of human trafficking.

“Not having a body to mourn is an unbearable grief. We only see our sons in these pictures,” Faouzia says, holding her son Hamza’s photograph close to her chest. “I would burn those borders down if I could, because this visa system is a death trap for our sons who are forced to travel on unsafe boats,” she concludes. 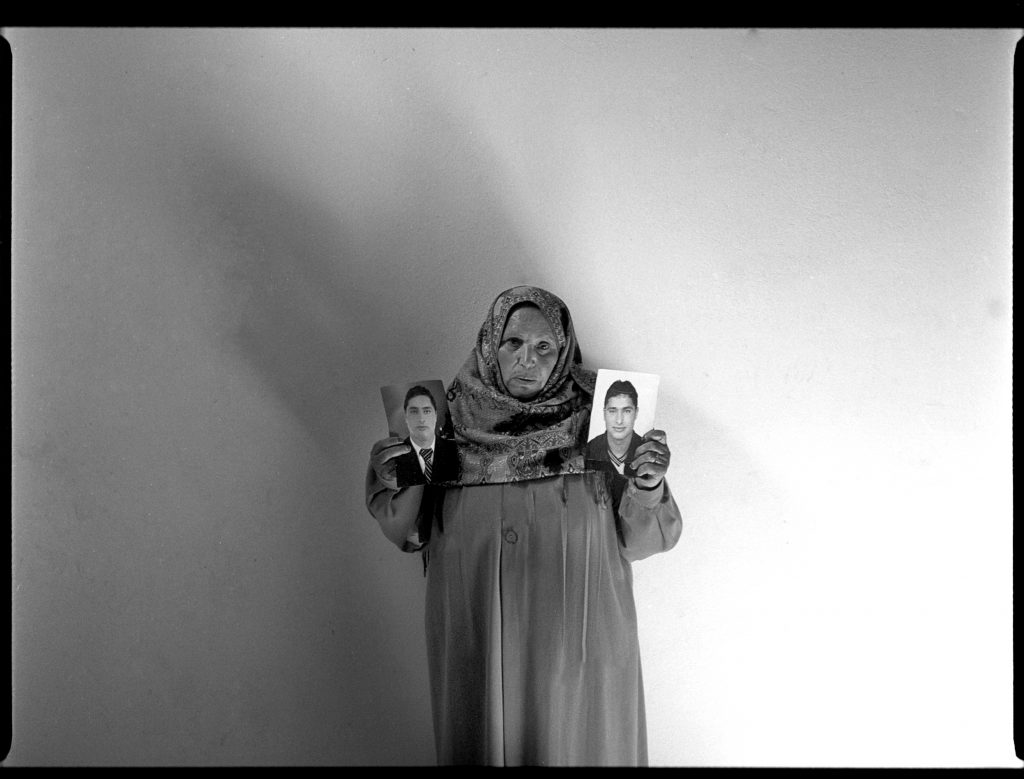 Bizerte, 2017. Chrifa, whose son disappeared in 2011. Like many other Tunisians he too left with a vision of Europe and the hope of finding a new job.

It is the first time that a movement of women and families on the other side of the Mediterranean has organised and claimed a right: the right to know where their missing children are. “This movement is part of the revolution, and at the same time it is a revolution in itself because it is holding Europe accountable,” Federica Sossi, a professor at the University of Bergamo and an expert on migration and remembrance, explains to Open Migration. “On one side we have Europe spending fortunes on security and control in the Mediterranean, a system of technology and a panopticon designed to keep people away. On the other there’s a movement of people claiming the right to know what happened to their loved ones.”

The landscape changes from Bizerte to the village of El Aliyah. The city gives way to olive groves and luxuriant, verdant grasslands. Mules carrying branches and freshly harvested artichokes travel the dirt tracks. Two women of rare and ancient beauty are sitting next to a nearly extinguished fire. Their hands are coarse from labouring in the fields, and their faces have a benevolent expression. 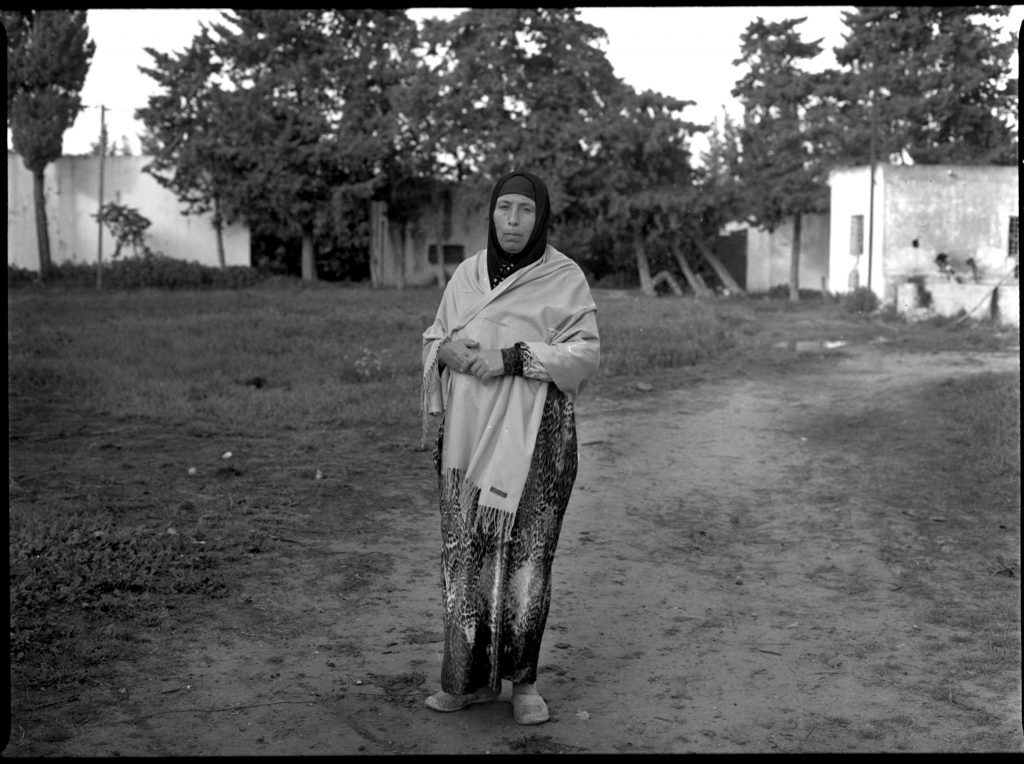 Ariana Governorate, Utica, Tunisia, 2017. Fatma in her country home. Her son Mohammed disappeared on the night of September 6, 2012, aged thirty-one. The man left his whole family to seek employment in Italy.

“I am the mother of Housemdine Jilili who disappeared on May 5, 2011. He would have been nineteen two days later,” the woman recalls. “All I ask is for some compassion, and some help finding out where our children are. If my son is dead, at least tell me that he is, so that my soul can find peace.”

Ftiah’s son had an education, a job, and a decent life in Tunisia, but he dreamt of travelling and visiting Europe. Like millions of others, he could not exercise his right to travel freely because of the nationality on his passport. Travelling is still a privilege reserved for the select few, and in the absence of alternatives, the only way is to put your life in the hands of human traffickers.

Imed Soltani, the founder of La Terre pour Tous who is working on behalf of these families, remembers it well: “When you have no legal means of travelling and it is nearly impossible to get a visa, the only alternative is through the smugglers, but the passeur – the trafficker – is a product of the system and of border protectionism, which is causing this demand for illegal routes to begin with. The governments have a duty to investigate and tell the families what happened to their loved ones.”

On February 23 the Tunisian investigating committee created two years ago travelled to Italy to meet the Italian Special Commissioner for Missing Persons, Vittorio Piscitelli. The women have waited six years, but there is finally a new joint technical and scientific commission that will compare the information gathered by the Italian and Tunisian coastguards with that collected by the Italian government. Even so, the families say it is not enough, as neither they nor their lawyers were allowed to attend the meeting.

“We are not blaming Italy. We blame the European Union and the governments that closed the borders, and we want them to investigate. We want a bilateral commission that includes our lawyers and representatives to investigate. We ask that the nameless bodies in Lampedusa be exhumed and a name be given to those who are buried in your country,” Souad concludes.

HEADER PHOTO: Bizerte, 2017. Saliah, the sister of Ben Ibrahim, who has been missing since April 2011. All photos in the article are by Arianna Pagani.
Translation by Francesco Graziosi. Proofreading by Alexander Booth.