March 5, 2019
Over 200,000 people marched in the streets in the People First rally, signed by more than 1,200 groups protesting racism and the discriminatory policies by the Italian government.

1. Tens of thousands march in anti-racism rally in Milan

Tens of thousands of people marched in Milan against racism and the policies of the populist government. The demonstration started in the afternoon on corso Venezia and finished in front of the Duomo to the sound of People have the Power.

There were music, dancing, slogans and floats, including one for the NGOs  shaped like a rubber boat. The Milan city official in charge of migrant policy, Pierfrancesco Majorino, put the number of marchers at 200,000, including many politicians and other officials.

Meanwhile, the Court of Cassation has overruled the order banning Riace mayor Mimmo Lucano from residing in the town. The court ruled that the case must be reviewed by the judiciary

2. Proof of torture in Libya

“On border control and the fight against irregular migration: we will scale up our joint efforts to prevent people smuggling, eradicate trafficking in human beings and combat those who exploit vulnerable people.”

These were the remarks by President of the European Council, Donald Tusk, at the end of the  first summit between the League of Arab States and EU member states, which was held in Sharm el Sheik on February 25. Once again, border control was front and centre in the relationships between the two sides, but how is the “common challenge” of migration being tackled in a country at war such as Libya?

Torture, overcrowding and shocking conditions: Channel 4 has obtained footage from inside camps in Libya.

The EU’s latest blueprint for stemming migration would constitute a breach of international law and an attempt to establish a “slave market””. The African Union has criticised the EU’s plan to “support the development of the concept of regional disembarkation platform” in north African countries in an attempt to deter people from making dangerous journeys across the Mediterranean. The so-called platform should provide for rapid processing on African soil of asylum seekers rescued in EU waters, but according to the AU they would be “de facto detention centres” – not unlike the ones already existing in Libya.

The news was broken by the Guardian, after a “common African position paper” was leaked, revealing the determination of the 55-member state body, currently headed by Egypt, to dissuade any of its coastal states from cooperating with Brussels on the plan.

Italy recorded 46 racially motivated attacks in 2017, a figure that rose to 126 in 2018. Furthermore, Italy’s intelligence agency has warned in a briefing that attacks on migrants and minorities could rise further in the run-up to May’s European elections. It also warned of a probable increase in clashes between anti-fascist and far-right groups which could cause serious public order problems.

Meanwhile, the UN special rapporteurs have voiced their concerns over the repeated instances of xenophobia, the criminalisation of migrants and the Italian government’s attacks on human rights groups, adding that the important role which Italy has played in rescuing migrants over the past years cannot be used as a justification to infringe on human rights of migrants and to disrespect international obligations.

5. The continuing effects of the Salvini bill

Italy’s new law on security and immigration is taking a toll on young foreign nationals.

In the province of Turin, two Armenian boys will not be allowed back in the school that they’ve been attending since September last year, when their family came to Italy seeking asylum. Despite their ongoing efforts toward integration and literacy, with support from classmates and teachers, their family has been transferred to a different centre and the boys did not even get to say goodbye to their friends.

At the same time, many young Africans have to give up their dream of pursuing an education in Italian universities: the Italian embassy has rejected 95% of student visa applications from Togo and Ghana.

The Danish Parliament has passed new legislation that has been described as a “paradigm shift” in the country’s refugee and asylum policy. The measure has been criticised by human rights organisations, as the approach marks a shift in focus from integration to future repatriation.

7. France to give 6 boats to Libyan navy

France will be purchasing six boats and delivering them to Libya to help the country’s efforts against clandestine migration. The announcement was given by French minister of armed forces Florence Parly and Libyan PM Fayez al-Serraj on the sidelines of a security conference in Munich.

Concerns were voiced by human rights NGOs. In a report published in January, Human Rights Watch claimed that the EU and Italy’s support to the Libyan coast guard is contributing to the arbitrary and abusive detention of hundreds of migrants and asylum seekers intercepted at sea.

#France chokes on the fate of #refugees & #migrants in #Libya but helps the Libyan coast guard force these vulnerable people back to dangerous and degrading detention centres in violation of international law.https://t.co/evgCTem6yC

Children who would rather live in the streets than sleep in overcrowded protection centres. Teenagers who spent weeks upon arrival without finding an adult who speaks their language. In 2018, Spain was the Mediterranean countries with the highest number of arrivals of unaccompanied foreign minors – about 13,000 according to calculations by the UNHCR. Human rights NGOs have denounced the shortcomings of the Spanish protection system.

A report by UNICEF said that, despite protecting children with specific policies, not the regular migration policies, once the minors enter the system, “the vulnerabilities aren’t reduced but rather made more acute”.

Giovanni De Mauro wrote in Internazionale that in 2017, 115,000 Italians left their country seeking better job opportunities abroad (compared to 40,000 in 2008); as if the population of a city such as Trento moved to a different country overnight. Their choice has also affected Italy’s job market. 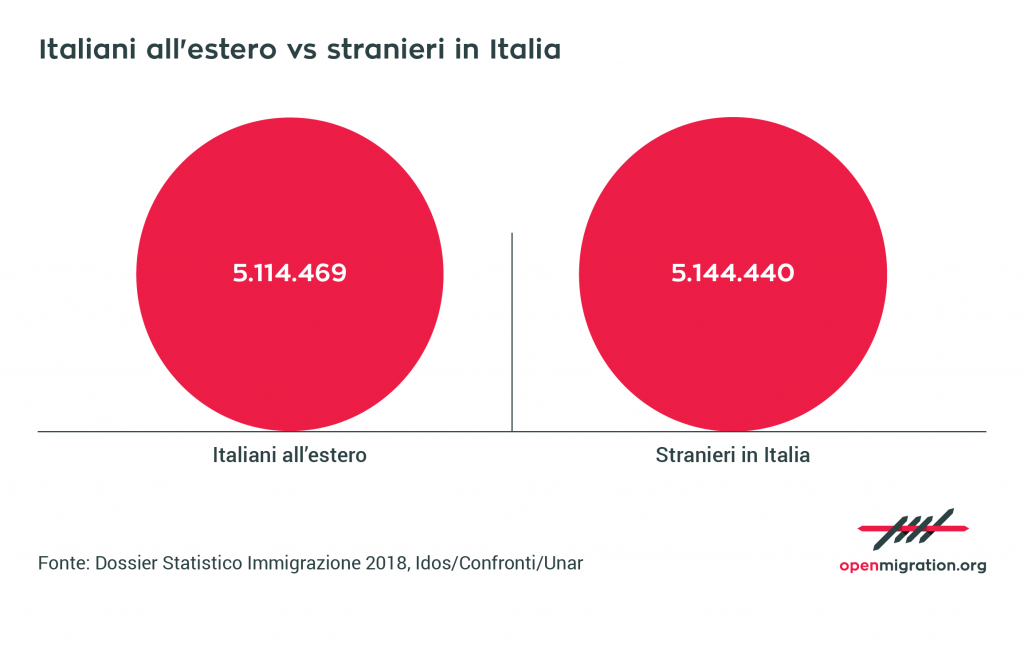 As for foreign nationals in Italy, our country has the highest rate of misinformation on issues of immigration. This week, we analysed the 2018 Statistical Dossier on Immigration, a must-read for a full picture of migration in Italy and the EU.

The German government has drawn criticism over its decision to fund the voluntary return of 437 refugees to Syria in 2018. As Foreign Policy reported, two people who were granted asylum, but went back to Syria after their appeals for family reunification were rebuffed, have disappeared into the country’s notorious prison system.

As the European Council on Refugees and Exiles reminded, Germany suspended family reunification for people with subsidiary protection in mid-March 2016, while under the new coalition family reunification was limited to 1,000 members admitted per month. Read the analysis by Federico Quadrelli on the German asylum system.