May 16, 2016
Chronicles from the refugee camps of Zaatari, Dadaab and Idomeni. Critiques of the EU migrants identification system - between forced fingerprints and facial recognitions à la Minority Report.

1. Hotspot: give your fingerprints or die

“We won’t give you anything to eat or drink until you give your fingerprints”. In the first episode of the series #WelcomeToItaly – a five chapters travel inside the Italian reception system, curated by Stefano Liberti for Internazionale – Valeria Brigida and Mario Poeta explore and narrate the frightening hotspot world, with a focus on the practice of identifying migrants by forcing them to give their fingerprints.

Fingerprints do not appear to be enough, though.  It indeed appears the European Union is considering a significant extension of the identification program with the introduction of a facial recognition software.
Just like in Minority Report. Except for the fact that is real life, not a fictional dystopia.

3. “Dying in Syria would be better than living here”

A great reportage by Raffaella Cosentino and Denis Bosnic from the enormous refugee camp of Zaatari, in the Jordanian desert, where hundreds of thousands of refugees are housed. Many of these people would like to back to the war-torn countries they fled rather than keep living in the camp – where, without neither water nor work for everyone, life is simply untenable.

Idomeni: 12 thousands people, 40% of whom are children, blocked for months in horrible conditions.
Numbers speak for themselves: in the camp there are only 250 restrooms, 70 chemical showers and 2 wi-fi connections (and asylum applications can only be submitted through Skype). Olivia Spaggiari documents the situation in this “modern-day Dachau”.

5. How Greece criminalizes solidarity with refugees

The inability of the European states to provide adequate responses to the ongoing humanitarian crisis  means that more and more ordinary people stepped forward to provide food and hospitality to the hundreds of thousands refugees arriving in Europe. Independent group of volunteers are now working all around the old continent –from Lesbo to Calais, through Roma and Lampedusa– and are arguably playing a key role in the daily management of the crisis. And yet these persons appear to disliked by European governments, which have indeed started to actively discourage the phenomenon by criminalising solidarity. This is why volunteers are now increasingly facing prosecution and even detention. Vice’s reportage from the Greek islands.

6. Kenya announces the closure of one of the biggest refugee camp in the world

Kenya decided to close the refugee camps of Kakuma and Dadaab. The latter, with its 300.000 Somali hosts, is the largest refugee camp in the world. According to the Kenyan Minister of the Interior, the presence of more than half a million refugees would represent a “threat to national security”. The international community and organisations involved in human rights have expressed great concern: to close the Kenyan camps would mean leaving all those people in desperate conditions and thus provoking a (further) humanitarian crisis.

7. Stories of the Gambian migrants who risked their lives to find a bitter destiny in Italy

In Gambia Europe is considered a promise land – but migrants who actually manage to reach the Italian coasts after the terrifying “journey of hope” have to face up to a very different (and less than sweet) reality. Louise Hunt’s reportage for the Guardian.

8. The global dimension of the “refugee crisis”, explained (with a map)

If you are still thinking that the “refugee crisis” is an European problem, this map of the countries welcoming the largest number of refugees (drawn by Quartz) will certainly change your opinion. 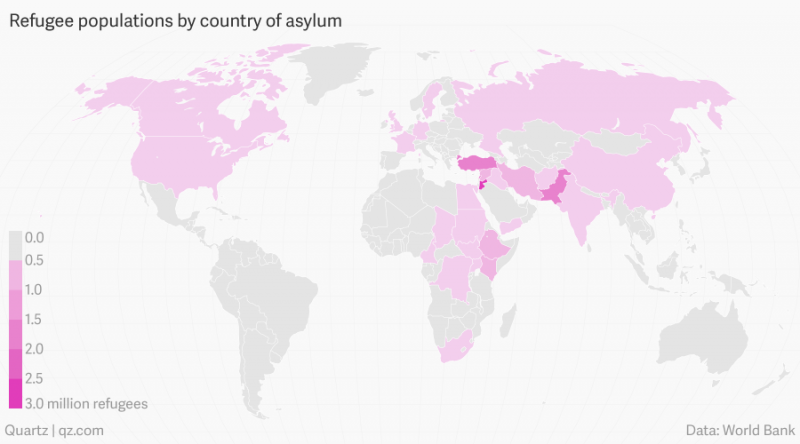 9. The strange case of the European refugees in America

Talking about the other side of the coin: for a European citizen it is pretty hard to obtain the status of refugee, especially in North-America. Vice narrates the rare and extremely serious cases in which the United States provided a humanitarian protection for people with European passport.

10. What history teaches us

1600 years ago the mismanagement of a migratory crisis led to the end of the Roman Empire. The historical analogy with the current refugee crisis is obviously limited – but history should really teach us an important lesson: closing the doors is the never the right answer, as it only leads to disaster.
A must-read by Annalisa Merelli for Quartz; because historia magistra vitae, as the Latins used to say.