June 19, 2019
Mere hours after the passing of security decree 2, pushed by Italian interior minister Salvini, the new legislation has already been applied to the Sea Watch, which sailed on June 12.

1. Law on unaccompanied foreign minors still not in effect

In March 2017, Italy passed a groundbreaking law on unaccompanied foreign minors, which included an organic and specific system, standardised criteria for age determination and identification, protection of the minors’ interests, the right to healthcare and education as well as the right to be heard during judicial and administrative proceedings (even in the absence of a tutor), and legal assistance; we wrote about it in this article.

As Arnaldo Liguori wrote in Il Fatto Quotidiano, however,  there is still no implementing decree, and many key aspects of the legislation – such as the training of volunteer tutors or family sponsorship – have not been enacted.

2. Freedom through soccer: the female teams of Atletico Diritti and Libere Nantes

As the female World Cup kicks off in France, let’s get to know two female teams with a special background.

The first one is Libere Nantes, Italy’s first team of refugee and asylum seeker women, after the successful experience of the male team. Eleonora Camilli went to the XXI Aprile soccer pitch in Pietralata, east of Rome, and wrote about the athletes of the 5 player teams who are free again, with the help of sports.

The second team is from Atletico Diritti, which has always focused on diversity and inclusion, enlisting refugees, students from the University Roma Tre and prison inmates. The Rebibbia prison held, before the president of the Chamber of Deputies Roberto Fico, the first female soccer tournament, with Atletico Diritti playing against Roma Tre and the prison staff.. A message from the players to the female team in France was read by the President of the Italian Soccer Federation, Gravina.

After being signed by president Sergio Mattarella, a new security decree championed by interior minister Salvini came into force on Saturday  and was published in the Official Gazette.

The 18 articles include measures to combat illegal immigration, on public safety, and preventing violence during sport events.

Among the key points, there are fines from 10,000 to 50,000 euros for the captain of a ship who violates orders to keep out of international waters (there is no longer a reference to rescue operations), the creation of a repatriation fund, and the seizing of ships for repeated offenders: Redattore Sociale has a detailed explainer of all the new measures introduced by the decree.

As with the previous bill, the government has issued an emergency decree, raising doubts on the wisdom of this choice; As Vitalba Azzollini wrote in Linkiesta, the decision has several weak points.

Meanwhile, the Italian Coalition for Civil Liberties and Rights has collected the experts’ doubts on the first security decree in an online publication.

Exactly one year ago, with the Aquarius forced to dock in Valencia, the season of closed ports began.

365 years alter, at least 1,151 people have died, and more than 10,000 have been forcibly sent back to Libya, exposed to further useless suffering. Sos Méditerranée and MSF have called  for a an adequate system of search and rescue, “including coordination of authorities in the Mediterranean, to avoid further deaths“.

As Pierre Haski wrote in Internazionale, what Europe is still calling a migrant crisis is actually a crisis of the States, politics and public opinion in the face of the reality of migrants:

“The numbers do not speak of an invasion, with only 1,950 sea arrivals in Italy since the beginning of the year. After the wave of 2015, the issue has become a political one that one one wants to face, while turning a blind eye to this tragedy. By locking the doors, Europe is losing its soul.” 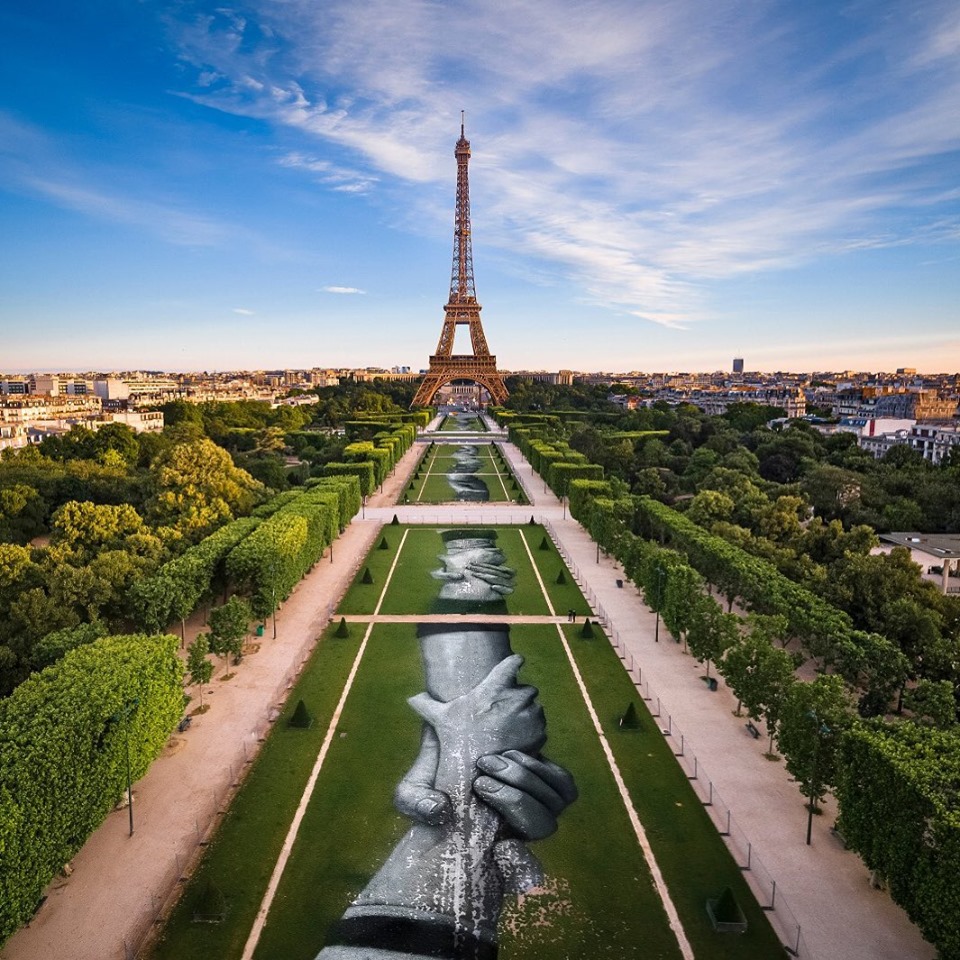 Meanwhile Paris celebrates Sos Méditerranée with an immense work of art the foot of the Eiffel Tower.

Pia Klemp, former captain of ships Iuventa amd Sea Watch-3, has been charged with abetting illegal immigration and will be tried in Italy.

35-year-old Klemp, who is from Bonn and has been at sea in the Mediterranean for the last six years, has helped save thousands of lives, at least until, in August 2017, Italian authorities impounded the Iuventa off the coast of Lampedusa, also confiscating all computers and cellphones on board.

Her trial is expected to begin soon. The court will address whether she was simply a humanitarian worker or if she “collaborated” with the human traffickers that operate from Libya, and therefore had “complicity” with illegal activity. According to her lawyer, she might face up to 20 years in jail.

Speaking with the Guardian, Klemp said rescuers were being targeted as part of a wider attempt to “stigmatise refugees”. “There is no way I am going to prison for saving people in distress,” Klemp said. “It is the most ridiculous thing on so many different levels. And I will never accept anything else but acquittal.”

Meanwhile, the petition calling on Italian authorities to drop all charges against  Klemp has collected almost 200,000 signatures.

A new Sea Watch case is unfurling in the Central Mediterranean, a few miles off Lampedusa, with the same actors – rescue NGOs, Libyan and Italian authorities – but some new aspects.

On June 12, the Sea Watch rescued 52 people on a rubber dinghy off Libya, about 47 miles from Zawiya.

Shortly after this, Tripoli offers to receive the rescued migrants, to which the NGO replied:

“The Sea Watch will not disembark the rescued migrants in Libya. Libya is not a safe country. Forcibly taking rescued people back to a war-torn country, having them imprisoned and tortured, is a crime that we will never commit. It is disgraceful for Italy to condone these atrocities and for the EU governments to be complicit in them.”

Salvini doubles down and sign yet another order to block the ship, but as Claudio Del Frate wrote in Corriere della Sera, no ship flying the flag of a EU Country (the Sea Watch is registered in the Netherlands) – as EU Commission spokeswoman Nathalie Bertaud pointed out – can take asylum seekers back to Libya,  which is not considered a “safe haven”, being a country at war where human rights cannot be guaranteed; Italy has already been sanctioned by the ECHR in 2009 (during the last Berlusconi cabinet) for sending rescued migrants back to Libya.

Meanwhile,women and children have been allowed to disembark, but the deputy PM’s stance is unchanged:

“Children, pregnant women and sick passengers have been allowed to land. I want what is good for everyone, but as far as I’m concerned, the outlaw ship can stay there for weeks, months, till the end of the year.”

Last but not least: the Sea Watch was notified by Guardia di Finanza officers with the security decree 2:this is the first time the new legislation has been enforced.

7. A campaign for solidarity in Italy

There is a part of Italy that is not ashamed of solidarity: from families sponsoring homeless migrants to groups setting up humanitarian corridors into our countries, to the many organisations providing legal assistance as well as free healthcare. Hundreds of diverse experiences in terms of size and expertise, each one with the potential to change the lives of those in need for the better.

These people can now rely on “Io accolgo“, a campaign launched by 42 Italian and international aid groups and  presented to the public on June 13 with a striking flash mob on the Spanish Steps in Rome. 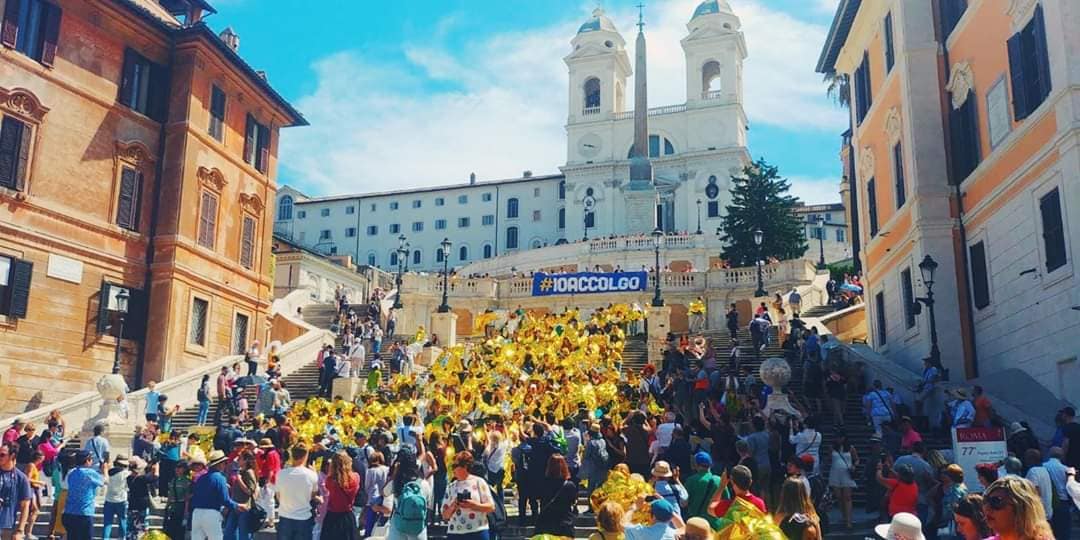 The symbol of the campaign is a thermal blanket, which many associate with first aid to migrants.

“The campaign” – in the words of the organisers – “started from an initiative by several civil society groups, organisations and unions, to give a unified response to the increasingly restrictive measures taken by the Italian government and Parliament towards migrants and asylum seekers (the closing of the ports, the security bill etc), which violate the principles enshrined in our Constitution and international conventions, and negatively impact the whole Italian society.”

8. Family sponsorship for refugees in Palermo

The city of Palermo will create a register of families willing to take in refugees, and the announcement will be given over the next few days.

“Family sponsorship as integration” is the name of the initiative created by the City and Refugees Welcome Italia, financed by the interior ministry as part of the Asylum, Migration and Integration FUND (AMIF). It will be aimed at families who want to take in, for at least six months, an unaccompanied migrant.

“Palermo is launching an important initiative with financial support from the EU. We are putting children and teengers first, which makes Palermo a city of education. Sponsorship is not a response to an emergency, but proof that ‘I am a person, we are a community’. Respect for all human beings, the engagement of citizens, are an extraordinary opportunity for integration provided by families, so that migrants are not left alone with public institutions. This project confirms that the administration’s choices are shared by citizens”, said the mayor Leoluca Orlando.

9. The Mediterranean route begins in Niger

“Once a gateway to the desert, Agadez has become famous as the “city of migrants”, a  mandatory stop for all those who wants to reach Europe via Libya from Sub-Saharan Africa”, Annalisa Camilli wrote for Internazionale, reporting from Niger, a country of transit on the route to Europe, the first frontier to the Old Continent.

The latest ARCI report on the externalisation of EU borders also discusses Niger and the normalisation of systematic violation of international conventions, and the risks for democracy of the widespread use of Italian and EU funds. The report sheds light on a process that seems to cater more and more to the needs of the security industry, with borders juet another market to invest in and profit from. Sara Prestianni wrote about it for Open Migration.

We end on sports: Marc Gasol has become a NBA champion with the Toronto Raptors, beating the Golden State Warriors at the end of a hard 6 game. Last summer, Gasol was among the volunteers saving lives in the Mediterranean.