December 6, 2016
Record arrivals and more people coming: the situation in Italy registers some good news, but still no permanent solution in sight. This week our web review also looks outside Europe, from the USA - where the upcoming Trump government stirs fears among undocumented migrants - and Asia, with the continuing persecution of the Rohingya people in South-East Asia.

1) One year, 500 lives saved: humanitarian corridors so far a success

The fifth arrival of Syrian citizens from Lebanon last week brought to 500 the number of people who have come to Italy safely and legally so far through humanitarian corridors created by the Federation of Evangelical Churches (FCEI), the Waldensian Church and Comunità di Sant’Egidio.

Under the agreement with the Ministries of the Interior and Foreign Affairs, 1,000 refugees with humanitarian visas will be taken over a two-year period, not only from Lebanon, but also from Morocco and Ethiopia. A small community and a model to follow.

2) Rome: taking migrants off the street, still no permanent solution in sight

A temporary solution has been found for migrants in Rome: starting this week, they will be able to sleep at the Red Cross shelter on via del Frantoio. An important first step, especially since the winter cold is nearing, but it still highlights the lack of a permanent solution.

“Laura Baldassarre, the municipal councillor for social policy, has said that memorandum of understanding with the Red Cross, due to expire in December, will be extended to June 2017”, Annalisa Camilli wrote in Internazionale. “This will enable the shelter on via del Frantoio to remain in operation, with its 92 beds, taking in asylum seekers and migrants now living on the streets. 50 additional beds will be provided as an emergency measure against the cold, and 70 more will be made available starting January next year, in a location yet to be determined.”

Volunteers from the Baobab Centre and MedOnlus will keep providing help and information at Tiburtina station, where most of the migrants and asylum seekers passing through the capital arrive. On December 17, a march will be held in Rome in support of the migrants’ rights.

3) Record arrivals of minors in Italy, and more immigrants to come

2016 saw record arrivals of migrants on Italian shores: 171,000 as of November 30. And there are more and more unaccompanied minors arriving by sea: over 22,000 as of October 31, compared to a total 12,360 in 2015.After Syria and the Middle East, arrivals from Sub-Saharan Africa are also expected to grow, according to the 22nd ISMU report, which was presented in Milan last week.

The report also analysed the numbers on immigration to Italy and their impact on society.

4) Children cannot wait: EU must do more to protect them, NGOs say

More than 700 children are estimated to have drowned when trying to reach Europe this year alone and one in four asylum seekers in the EU is a minor: a staggering number of vulnerable, unprotected people, according to a joint statement from 78 human rights organizations. “Many of these children will one day become EU citizens. We need to invest in them and encourage them to become active participants in our societies. The EU and member states can do a lot more”, the organisations, which include UNHCR, UNICEF and Save the Children, said.

5) UK: pushing undocumented children out of schools will create a disenfranchised generation

Leaked cabinet letters acquired by the BBC indicate that back when she was home secretary, Theresa May suggested schools could withdraw places offered to children of undocumented immigrants, a plan to “deprioritise illegal migrant pupils”.

The law guarantees the right to education for all children of compulsory school age irrespective of their lack of immigration status. However, research shows that access to these legal provisions has become increasingly difficult for these children, Nando Sigona (a sociologist and researcher at the University of Birmingham) told The Conversation. Of the 120,000 undocumented migrant children living in the UK, a large majority are either born there or migrated at an early age. After ten years of residence in the country, they are entitled to British citizenship; so legislation such as this, Sigona explained, would produce a generation of disenfranchised youth, excluded from their very own society. 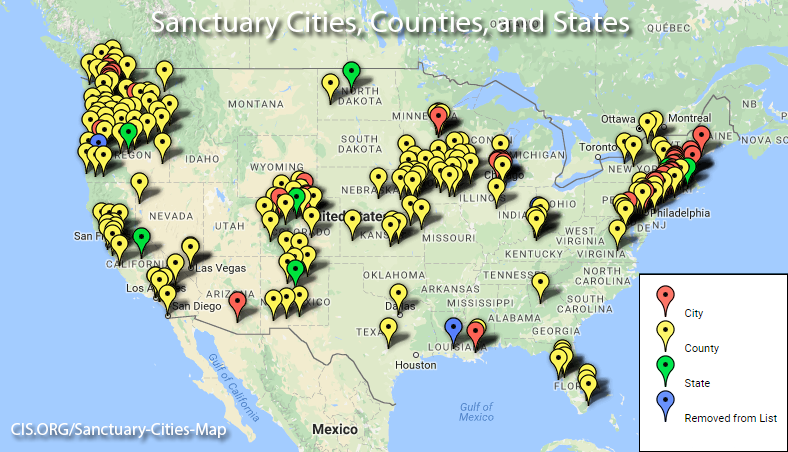 The map of sanctuary cities in the USA

6) Sanctuary cities and their limits

“You are safe in Chicago”, said mayor Rahm Emanuel to the undocumented immigrants living in the city. Donald Trump’s election has brought fear to many who live and work in the USA without being American citizens. Some mayors, including Emanuel and New York’s Bill de Blasio, have instituted “sanctuary cities”, safe havens against deportations carried out by the federal government.

The movement was born in Tucson, Arizona 34 years ago, when a Presbyterian minister announced that his church would protect refugees fleeing the civil wars in El Salvador and Guatemala, at a time when both regimes were supported by the Reagan administration.

While the central government has no choice but to rely on the cooperation of local law enforcement to deport undocumented immigrants (as declared by the President-elect), what kind of effective protection can sanctuary cities offer? Read Alex Kotlowitz’s article in the New Yorker.

7) Refugee crisis in Asia: the plight of the Rohingya people

Persecutions against the Rohingya Muslim minority continue in Myanmar: as the Malaysian prime minister led a protest rally calling for an end to the genocide, the Myanmar leader Aung San Suu Kyi accused the international community of stoking resentment between Buddhists and Muslims in the country’s northwest, where the army has killed at least 86 people and sent 10,00 fleeing to Bangladesh. Despite having lived in Myanmar for generations, Rohingya are denied citizenships; they have been persecuted since 2012 and scattered through Southeast Asia since 2015.

8) Hungary: the story of Ahmed, unjustly sentenced to ten years in prison

One day last year, Ahmed was at home in Cyprus with his wife and their children when he received a call from his parents in Syria, telling him they were leaving their town following a lull in the bombing. Ahmed rushed to help them travel up through Turkey, Macedonia and Serbia, until they reached Hungary. Caught in the clashes between refugees and the Hungarian police at the border with Serbia, Ahmed was arrested, charged with “an act of terror” and sentenced to ten years in prison. Read his story.

Turkey is under growing pressure from nearly three million Syrian refugees. To mitigate domestic tensions and spillover from regional conflicts, its government needs to develop, and find support for, new policies that open refugees’ routes to jobs, education and permanent legal status, according to Crisis Group’s report.

Muslims living in Athens are waiting: 10 years after the law was passed, the government should deliver on its promise to build a mosque in Athens. Will it ever see the light, despite pressures from far right groups (Golden Dawn held a protest at the site)? Will it help create more integration and stability?

According to the Muslim Association of Greece, there are more than 100 unofficial mosques scattered through the capital for the estimated 200,000 living there. Read the article in Al Jazeera.