January 9, 2018
Humanitarian crises, past, present and future: is there no end in sight? Meanwhile, in 2018, there are still border deaths and crimes of solidarity. Also: the persecution against the Rohingya, the limits and consequences of the “reconversion” strategies for people smugglers; migrants enslaved in Libya; the ongoing deportations to Afghanistan, amid concerns for safety; the end of the refugee dream in Germany.

1. Ten humanitarian crises to look out for in 2018

From the Rohingya to South Sudan, from hurricanes to famine, 2017 was a very tough year. But 2018 is shaping up to be even worse: the editors at IRIN are painting a bleak picture – and a very realistic one – of the crises that will shape the humanitarian agenda in 2018. Syria, Congo, Yemen and Venezuela are only some of the countries involved; wars and climate change only some of the triggering factors.
The common denominators in all these crises? As Alexandra Bilak, Director of the International Displacement Monitoring Center, tweeted: “1) they are not new; 2) they could be prevented with the right political will and investment; 3) they will continue to cause massive suffering and displacement if 2) not addressed.”

Meanwhile, one of these humanitarian tragedies is still happening before our eyes: with more than 3,100 recorded migrant deaths in the Mediterranean last year, the death count for 2018 has already begun. The first disaster at sea happened on January 6: the Italian Coast Guard has confirmed 8 deaths (the bodies have been retrieved and transported to Catania), while Sea-Watch says at least 25 and the International Organization for Migration (IOM) has recorded 64. Read the stories from the BBC and Repubblica (with footage from the rescuers).

The victims are not only those who did not survive the dangerous crossing of the Mediterranean. The tragedy goes on even after arrival, as show by the story of Ammara Walid, the thirty-year-old Tunisian who hung himself at the Lampedusa hotspot, where he had been detained since October 30, out of despair. Read the article by Luigi Manconi in Huffington Post Italia, as well as our own in-depth story on detention in CIEs and hotspots and the article on the migrants’ invisible wounds.

3. In 2018, solidarity is still being criminalised

Meanwhile, in Nice, solidarity is again under attack. Martine Landry, an activist with Amnesty International France, is to appear in court this month, charged with “facilitating the entry of two illegal foreign minors (…) and helping them enter France from Italy.” She is facing up to 5 years in jail and a 30,000 euro fine. Read the article by Riccardo Noury in Corriere della Sera, as well as our own in-depth story on the crimes of solidarity.

4. “Burned to the ground”: the scale of the persecution against the Rohingya

Before violence erupted in August, there were 21 Muslim villages in Rathedaung. By mid-September, there were only 5. The rest were burned down in the violent persecution against the ethnic minority, who was subjected to mass murder and rape.

“Burned to the ground” is a stunning piece of journalistic work made by Reuters Graphics, combining satellite images, maps, pictures, analyses of fires and survivor accounts to convey the scale of the persecution, violence and destruction aimed at the ethnic minority in Myanmar. Satellite images show villages where the Rohingya areas are completely reduced to ashes, yet the Buddhist sides are intact. 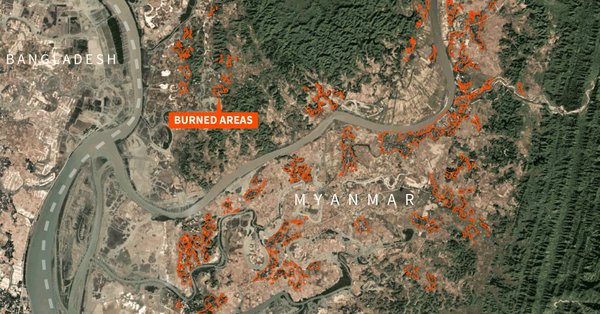 Burned to the ground – via Reuters

An estimated 650.000 are being affected by the persecutions and are now fleeing to Bangladesh (where Giuliano Battiston met with some of them, in an exclusive report for Open Migration).

5. Niger: the limits and consequences of a EU scheme to offer alternatives to the Sahara smugglers

Transforming an economy that Europeans view as criminal, without endangering Niger’s fragile social cohesion, with a budget of just 8 million euros: the Rapid Impact Economic Action Plan for Agadez (PAIERA) is the smallest programme in the EU Emergency Trust Fund for Africa. Still, its political importance is huge. A pilot operation, with a high risk of failure, it is the object of Giacomo Zandonini’s report for Refugees Deeply on the EU’s work in northern Niger to “reconvert” migrant smugglers to other activities. A programme that has raised many questions: are we financing criminals, as a government officials asks? Is there a real intention to change? Are we going to repeat past mistakes?

The EU programme in Niger also has serious consequences for migrants, whose journeys have now become exponentially more dangerous. This is illustrated by Sudarsan Raghavan’s report in the Washington Post through the story of young Aziz, who thought he knew the risks (dying of thirst in the desert or drowning at sea) until he was faced with a new threat.

Last December, Zandonini wrote for us on how life changeed for a former migrant smuggler after the government of Niger enforced restrictive measures, and how the closing of the Agadez route pushed the local retail economy into the hands of a criminal system.

The European Union is still working with the Libyan Coast Guard to reduce the number of migrant arrivals on European shores. But many of those “rescued” at sea end up in detention centres in Libya, where violence and abuse are a daily occurrence, and some of them are used as slaves. Read the report by Stephanie Hegarty for the BBC, as well as a Sudarsan Raghavan’s piece reporting from Sabratha for the Washington Post, on how the militia wars are affecting the flow of migrants from Libya.

7. “This country isn’t safe” – but returns to Afghanistan have not stopped

Mohammad Elham returned to Kabul a few months ago. He had left the city in 2010, after the Taliban killed his wife and children. And he returned as a deportee, like many Afghan asylum seekers that Europe is sending back home, to a dangerous country where their lives are at risk every day.

Under a controversial agreement between the EU and the Afghan government (which human rights organisations have called “a new low”), EU countries are still increasing the number of rejections and returns.  A typical example is Germany, which, according to data from ECRE, had an acceptance rate of almost 75% in 2015 for Afghans, but only nearly half as much in 2017.

“No part of Afghanistan is safe”, Amnesty International said in an October report which called on European government to suspend deportations of Afghans asylum seekers. The bombing near the German embassy in Kabul, which killed more than 150 civilians last May, is only one of the increasingly frequent attacks in the country, but this does not seem to stop the European governments, as Ruchi Kumar explained in IRIN News.

A few months after the federal elections, Germany is reckoning with its relationship to refugees: 500,000 were allowed in in 2015, in an unprecedented act by Angela Merkel. But now the Chancellor is struggling to form a coalition government, a task made even harder by the success of the right-wing AfD party, which campaigned on a xenophobic and anti-immigration platform.

Kenneth Rosen explains in The New Statesman how German policies today see a reduction of services for refugees, part of a larger integration plan to cut support while allowing people to live independently. The effects can create insurmountable difficulties. An example is that German classes are no longer automatically available for free (even though a law was passed last year that allowed refugees better access to courses). New initiatives often cater to those well into resettlement, not those who need more basic, functional help. Yet many of these programmes are supported by volunteer engagement, which is waning. Will it be the end of the refugee dream in Germany?

9. The destruction of the US refugee resettlement programme

The American dream is over for refugees. 2017 will be remembered without a doubt as the year President Trump ended the US resettlement programme. There is still hope for the future (Congress still has the final word), but the cap for refugee admission in fiscal year 2018 has been lowered dramatically. Read the article by Deborah Hamos in NPR.

10. Ai Weiwei: freedom of movement is the most basic form of dignity

“A passport should be part of an individual identity (…] that’s the basic dignity a nation should give to any citizen.” Says Ai Weiwei, one of the world’s best-known artists, whose passport was withheld by the Chinese government to keep him from travelling. After turning his own persecution into art, he has now focused on the global refugee crisis. He is out with a new documentary on the subject, Human Flow, along with a major art show, “Good Fences Make Good Neighbours”, set to open in New York.

“If you think all these tragedies are created by individuals, by humans, then we can stop it. But if we pretend this has nothing to do with us, this is very tragic—not only tragic to the refugees, but tragic to humanity, to our understanding about who we are and about what kind of future this society is going to get,” Ai Weiwei said in an interview with Reason.