May 28, 2019
The TAR ruling on Riace, the unconstitutional aspects of the Salvini decree, the acquittal of migrants for the “hijacking” of the Diciotti and a question in the aftermath of the European election: what will change for migrants and refugees?

The election results in Europe

More than 400 million Europeans in 28 member states were asked to cast a vote for a renewed five-year term of the European Parliament, the European Union’s only directly-elected body.

The issue of migration was less prominent than in the past, but the results of these elections will surely bring new developments for refugees and migrants, both at the national and the EU level.

In Greece, a country that has become a symbol of the refugee crisis – read our reports from the Moria camp on Lesbos here – the vote became a referendum on incumbent leftist leader Alexis Tsipras, who was defeated and will call an early election Meanwhile, there are still reports on the conditions of migrants on Greek islands; see the latest one from Samos.

In France – where Marine Le Pen surpassed Macron and is calling for an early election –conditions for migrants stranded in Calais are more precarious than ever and Brexit is looming over their future, especially since the Brexit party came first in the UK.

In Hungary, where migrant abuse is a matter of urgency, according to the Council of Europe’s human rights commissioner, prime minister Orban’s party Fidesz scored a big victory by winning 52.14% of the votes.

While populist parties have made gains, pro-Europe parties are hanging on. What future should we expect for issues of migration, such as the long-awaited reform of the Dublin Regulation?

2. The election results in Italy

Matteo Salvini scored an unprecedented win: at 34%, not only has the League grown dramatically from the last European election, but it has also doubled its votes from the last general election, where it won 17% of the vote. Its government ally, the Five Star Movement, registered a loss with its worst result ever (16.57%), becoming the third party in Italy after the Democratic Party, which won 23% of the votes.

The League’s victory was made all the more conspicuous in the European election in two places that had become a symbol of solidarity with refugees.

As Felice Cavallaro wrote in Corriere della Sera, the League became the first party on Italy’s southernmost island as well as in Riace, a model town for immigration that was shaken by an investigation into the SPRAR system.

While Lampedusa mayor Salvatore Martello said, “Welcoming migrants has become like a crime”, the island has still reason to be proud: Doctor Pietro Bortolo, a prominent figure for his assistance to migrants, won a seat at the European Parliament with 200,000 votes.

3. Migrants accused of hijacking ship cleared of all charges

The interior minister had said that they should be “handcuffed” and removed from the Diciotti, at the port of Trapani. Now, after 10 months spent in jail, Ibrahim Tuani, 32, from Senegal and Ibrahim Amid, 27, from Ghana, have been cleared of all charges by the Trapani court.

As AGI reported, in July last year, the two man had surrounded the captain of the ship that had rescued them – the Vos Thalassa – to avoid being sent back to Libya, where the ship was headed under orders from Rome.

According to Il Fatto Quotidiano, recounting the crew’s version of the events, the two had made a throat slashing gesture, which was interpreted as a clear threat by the ship’s captain.

🔴 Court finds: No ship abduction but legitimate self-defense. Once again Italian courts rule against interior minister #Salvini and his illegal policy of port closure – #CivilDisobedience by the refugees meet #ConstitutionalObedience by the authorities!https://t.co/gVtFuE6HRu

According to the other migrants on board, however, the gesture, accompanied by the words “No Libya”, referred to the very real threat to the migrants’ lives once brought back to Libya. This version was favoured by the judge who ordered the immediate release after the acquittal: “The hijacking does not constitute a crime as the migrants acted in self-defence at the prospect of being sent back to a dangerous and unsafe country”.

4. Teaching English in Italy or being deported to Nigeria: which future awaits Taiwo?

After being orphaned, he crossed the desert, was beaten up in Libya’s detention centres, braved the sea to reach Italy and is now faces deportation to Nigeria, the very country he fled three years ago. This could be the life story of Taiwo in a nutshell, but it would miss a crucial detail to his life and the community that welcomed him: Taiwo teaches in the local elementary school, as part of the project “Bimbisvegli”, and he is the children’s favourite teacher. And the pupils launched an initiative to stop the deportation

5. TAR rules in favour of Riace: no exclusion from the SPRAR system

The TAR of Reggio Calabria has overruled the order from the Interior ministry to exclude the city of Riace from the SPRAR system.

According to the judges, the interior ministry’s complaints are too generic and lacking, with no reference to specific issues.

The judges found a contradiction in the fact that the ministry moved against Riace less than a month extending its project for three years, without imposing any sanctions. As Corriere della Sera reported, “The interior ministry never acted after detecting irregularities in Riace, and neither did it give the city a deadline to rectify them. The judges also object to the ministry’s revoking of funds on the grounds of previously known difficulties, after granting the project an extension.”

Riace’s model was regarded as a unique example of solidarity and over the years had made the small town well known outside Italy.

“Good news” – former mayor Mimmo Lucano said to Repubblica – “but it’s still a shame that the project was ended. The people have been transferred and the damage is done. But at least some justice has been made for the administration.”

6. The unconstitutional aspects of the Salvini decree

The Italian government drafted last week a second bill on security and immigration, which includes further criminalisation of sea rescue operations, a reform of the penal code, more funding to migrant return and more powers granted to police forces; in an article for Internazionale, Annalisa Camilli lists the main criticisms. The Italian Coalition for Civil Rights and Liberties has published an e-book on the critical aspects of the first Salvini decree. 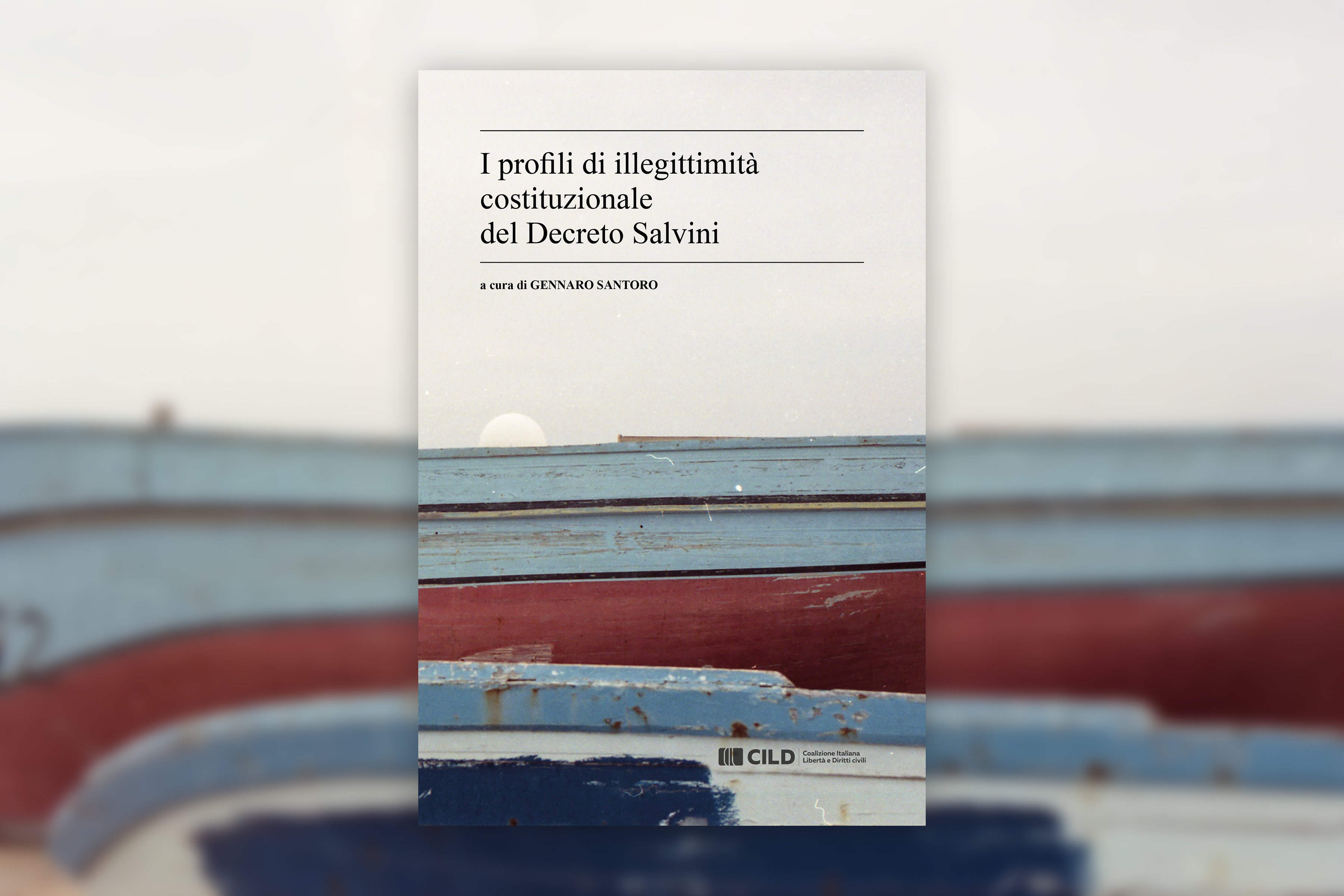 From the end of humanitarian protection that ensured the constitutional right of asylum, to administrative detention for asylum seekers (for which Italy was already condemned by the ECHR), attorneys, professors and experts analyse all the aspects of the decree that contrast with constitutional and international regulations.

Judges in Genoa have also ruled against the decree: denying civil registration violates the fundamental rights of immigrants.

Lebanon summarily deported at least 16 Syrians, some of them registered refugees, after they arrived at the Beirut airport, Human Rights Watch said.

Most of them expressed their fears of torture or persecution if returned to Syria. Despite this, the Syrians were not given a meaningful chance to seek asylum or challenge their removal, and were forced to sign “voluntary repatriation” forms.

“Lebanese authorities shouldn’t deport anyone to Syria without first allowing them a fair opportunity to argue their case for protection and ensuring that they don’t face a real risk of persecution, torture, or other serious harm,” said Lama Fakih, acting Middle East director at Human Rights Watch.

The difficulties and risks of voluntary returns from Lebanon to Syria had been the subject of a report by Laura Cappon.

8. If Libya is no longer safe (and even Salvini admits it)

A new surge in migrant arrivals in Italy. Sea arrivals trebled in May: 700 people over 3 weeks – with as many as eight boats landing in 24 hours, as Alessandra Ziniti reported in Repubblica – while the number of deaths at sea has hit 500.

People are still fleeing war-torn Libya by the thousands, and the interior minister seems to have noticed, too.

“Libya is now an unsafe, unstable country, and the issue is beyond immigration. We are working to bring back peace”, Salvini said during a programme on SkyTg24. The minister backpedalled after insisting for months that Libya was a safe haven, and directing rescue ships to disembark migrants there.

Meanwhile, Malta has rescued almost 300 off its coasts.

More than 40 people have been transferred to Australia for urgent medical treatment from Manus Island and Nauru since the passing of the medevac laws.

Medical Evacuation Response Group (MERG) – a partnership of specialist refugee support organisations – is triaging the refugees and asylum seekers seeking care; they said to the Guardian that conditions inside offshore centres remain critical.

Following the re-election of Australia’s conservative government, there was a spike in suicide attempts among the migrants forced to live in squalid conditions on Manus Island: Al Jazeera reports that at least ten men have tried to kill themselves.

10. Palermo is again a migrant city

From the restaurant that pays for the operations of pro-migrant and anti-mafia activists to the Bangladeshi migrants who refuse to pay for protection and take legal actions against the mobsters. In Ballarò market, in the centre of town, extortion has not disappeared, but is now run by foreign and Italian mobsters alike. Read the report from Palermo, with the thousand contradictions of a culturally diverse city, by the New York Times’ Jason Horowitz.