January 24, 2017
People continue to die at the doors of Europe, out in the cold or in the sea. An investigative report on the refugees’ inflatable rafts (made in China) and a report on walls against Africa. A reflection on the absence of solidarity within the European Union and an example of how Europe wants to criminalise solidarity itself.This and more in our weekly web review.

1. 2017 has only begun but there have already been deaths

January has not even finished yet and already more than 200 people have died in their desperate attempt to reach Europe. There are the many — ever more, and never as many before — who have died at sea, and those who have frozen to death due to the desperate conditions accompanying their attempt to reach the continent they had hoped would be their salvation. Lizzie Dearden writes for The Independent.

2. The snow-hell of Serbia for thousands of refugees with no way out

Thousands of refugees are stranded out in the snow in Serbia because it is impossible for them to move onwards and no one wants to turn around.
Vice News reports.

3. Who is producing the refugees’ inflatable rafts?

In the end, it’s not hard to find a large number people taking advantage of migrants’ and refugees’ lives and making money off the current humanitarian crisis. This includes those Chinese businesses producing “refugee boats” — and with them those inflatable rafts that far too often go down within our sea.
Francesco Floris’s report for Linkiesta.

Journalist Martin Plaut’s in-depth analysis explains, through statistics and Frontex maps, how Europe has progressively closed African migration routes — turning Libya into the only (lethal) means of reaching Italy. Quite literally “the last brick in the wall”. 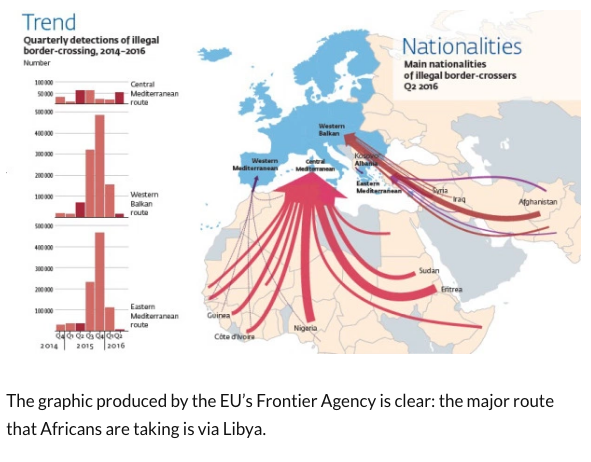 5. Europe’s lack of solidarity and the closing of Italy and Germany

Italy and Germany, along with Greece, are the countries that have paid the highest price for the dramatic lack of solidarity within the European Union. And now both of the former countries are increasing unilateral deterrence measures including extremely questionable agreements with African countries of transit and greater recourse to detention and deportations.
Kristy Siegfried’s article for Irin News.

6. The man on trial for helping migrants

Cedric Herrou is a French farmer currently on trial for helping migrants (here is a copy of the letter in which he explains and defends his actions). Pending his sentence this video from Al Jazeera examines his story.

A French farmer accused of helping refugees & migrants cross the France-Italy border has been taken into custody…again. This is his story: pic.twitter.com/bE6b0Fu7a4

When Syrian refugees began to arrive in Thessaloniki, Vasilis Tsartsanis decided to do everything he could to help them. And this in turn changed his life forever.
The story of one man who made Greece a more welcoming place, from Open Society.

8. Changing the narrative of immigration in Italy

Together with mayors and the third sector, Emma Bonino and the Radical Party’s latest challenge is getting rid of the Bossi-Fini law and altering the narrative of the phenomenon of migration in Italy, beginning with a proposed law of broad popular support which would at long last replace the existing one.  Susanna Turco’s article for l’Espresso.

9. The Italian government’s plan for immigration

If the Radical Party’s proposal on integration and its supporters highlight the importance of “combatting the causes of illegality instead of those who are considered illegal”, the government’s latest plan – expected to be announced 25 January (having already been postponed) – proposes combating illegal immigration with detentions and repatriations. This article in the Internazionale takes stock of what are supposed to be the three principal points of the plan.

“Italy has never rejected so many asylum requests,” they say, commenting on “the real numbers of immigration”. But they are mistaken in their interpretation of the figures, playing on the ambiguity of the term ‘refugee’ and ignoring that the many refusals of the territorial commissions are not enough to support talk of those requests’ essential groundlessness. Il Post’s fact-checking of the latest statements from Salvini –  the man who claims that only a few thousand people have the right to remain, while the real numbers are much higher. In addition, here is our analysis of the proposed reform of the right to asylum and one on what those who are requesting asylum in our country are fleeing.