July 17, 2018
First it was the NGO rescue boats; now it’s military ships finding Italian ports closed to rescue. While the Italian Coast Guard Diciotti was only able to disembark migrants following an intervention by the President, the Guardia di Finanza ship Monte Sperone had to wait till Malta and France were ready to take in some of its passenger load.

1. Italian President puts an end to the Diciotti standoff

Last Thursday evening, the Italian Coast Guard ship Diciotti was finally able to disembark the 67 migrants it had taken in a few days earlier from the Vos Thalassa (which had rescued them). Despite being a military vessel, the Diciotti had been blocked by the Interior Ministry, caught in a standoff – amid surprising statement from Transport Minister Toninelli – and forced to await a docking port for days. When Toninelli eventually assigned the port of Trapani, the Diciotti had to wait hours for permission to disembark the exhausted migrants.

The Interior Ministry claimed that the Vos Thalassa had requested a transfer of passengers following an incident with some of the migrants, described as a “mutiny” of “rioters”, and called for the arrest of the supposed rioters upon disembarking, without an investigation or orders from a judge. Fiorenza Sarzanini published here a transcript of the communication between the Vos Thalassa and the Coast Guard: the Dutch ship owner has denied that there was any danger on board, while confirming that the migrants were merely terrified of being sent back to Libya. Reporter Nello Scavo wrote on Avvenire that an Italian Navy helicopter – already scheduled to intervene on the boat – cancelled its mission because there was no danger on board (according to Agi, two of the migrants on board were later charged with acts of violence and hijacking; an investigation will follow).

The mayor of Trapani said Interior Minister Salvini should “take it out on the bigger guys”, not on migrants. While INTERSOS workers on board the Diciotti were tweeting this:

news broke that President Mattarella was following the situation closely, and it was only his intervention with PM Conte that put an end to the standoff.

The Diciotti crisis had just been resolved when two other military vessels – the Monte Sperone from the Guardia di Finanza and the Frontex British patrol Protector – were barred from disembarking 450 migrants who had been rescued off the Italian island of Linosa.
The disembarking operations were only allowed after France and Malta committed to taking in 50 people each. A victory for PM Conte, who described it as the first European disembarkment, while the UNHCR called it unnecessarily prolonged suffering.

Meanwhile, in Libya, Al Serraj’s government has asked Italy to reinstate the Berlusconi-Gaddafi agreement in return for taking back the migrants intercepted at sea. Here at Open Migration, we have collected all of our 18 pieces on Libya: you can find them (in Italian) here.

2. Reactions to deaths at sea and the closure of ports

As Salvini promised that Italy will no longer be Europe’s refugee camp and made his strategy on migrants clear – the ultimate goal is “to stop arrivals, not to distribute them across Europe”- reactions to the government’s decision have multiplied.

Writing in the Italian newspaper Corriere della Sera, author Sandro Veronesi called to Italians to mobilise: “Let’s put our bodies on the ships rescuing migrants”, followed by Roberto Saviano who said “enough half-spoken sentences, enough silence, let’s use our bodies and voices”. Interviewed in the Guardian, Pietro Bartolo spoke about his experience as a doctor in Lampedusa and urged everyone not to be indifferent to the plight of those who have fled torture in Libya.

Osservatorio Solidarietà also commented on the Diciotti crisis, starting a petition to Italian President Sergio Mattarella to ask “that mercy, justice, sanctity of fundamental human rights and separation of powers continue to be at the foundations of our lives as citizens in a democracy“.

“NGO ships will only ever see Italy in postcards.” Someone took Salvini’s words literally and flooded the Interior Ministry with 10,000 messages from Italy’s major tourist resorts: the young creative minds of “Solo in cartolina – estate 2018” launched a campaign against deaths at sea off the Italian coasts. 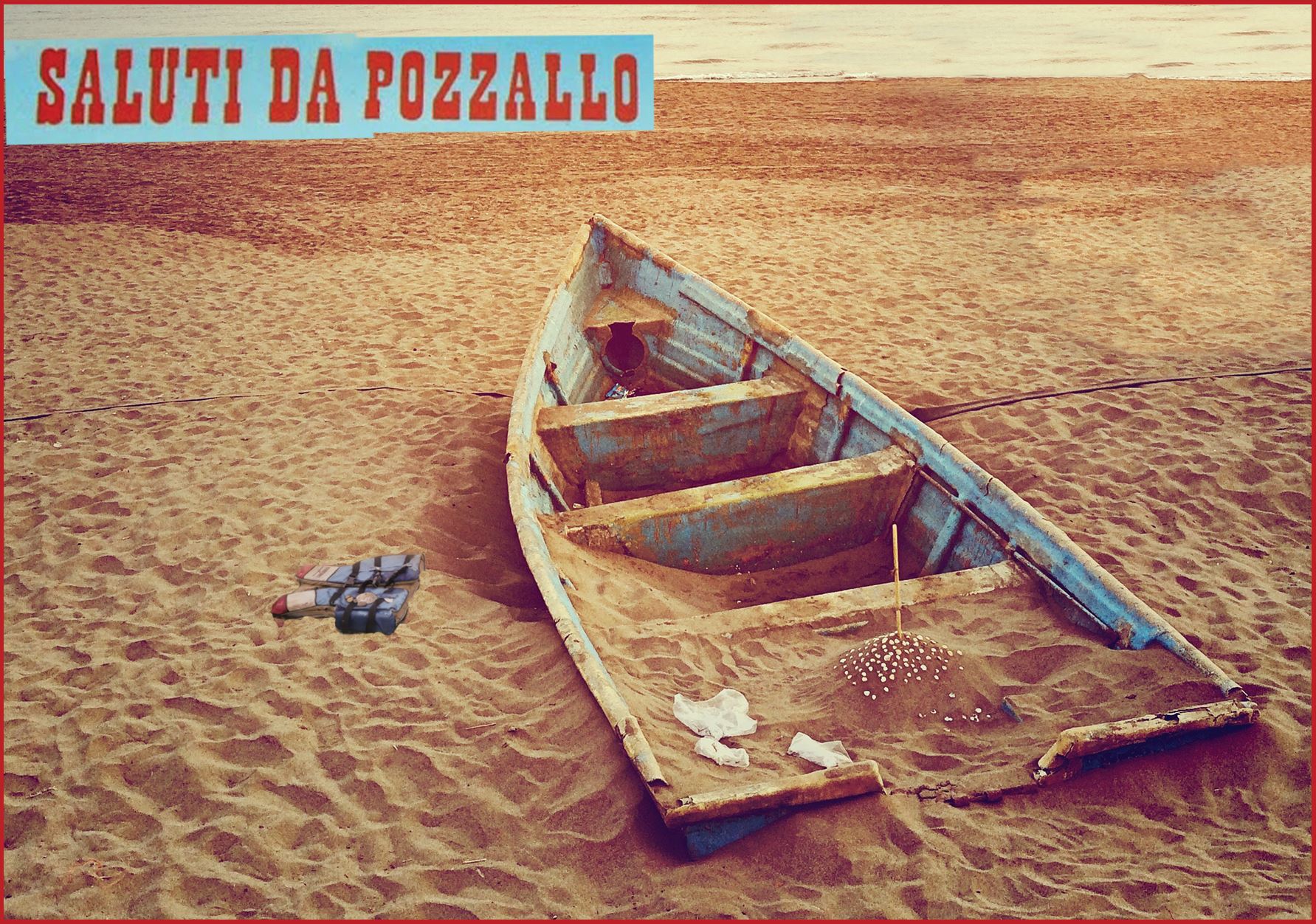 While the Guardian wrote about the Italian clergy’s opposition to intolerant policies – from Don Formenton’s sign against racists to Don Ciotti’s red shirts – Combonian Father Zanotelli has proposed a fast and a picket outside Parliament in protest again Italy’s migration policies.

In Malta, the unjustified halt to spotter plane Moonbird has sparked demonstrations against PM Muscat, with protesters claiming the decision to stop assistance to rescue operations is abusive and illegal.

Open the ports, stop the criminalisation of rescue operations, remember that saving lives at sea is a duty: these were the requests of the activists who chained themselves outside the Transport Ministry. The protestors, who were asking to meet with Minister Toninelli, were dispersed by law enforcement officers. The day after, the same officers raided the Baobab centre (in Rome), identified the migrants, took 35 people into custody for questioning and sparked fear of an imminent evacuation. An evacuation did take place in another location in Rome, on via Scorticabove. The Sudanese nationals who had been living there for more than ten years have been offered no alternative to sleeping out in the streets. Meanwhile Valerio Cataldi, one of the public news journalists who wore a red shirt on national TV- and were threatened with disciplinary measures – explains his gesture of solidarity: from Thailand to the Mediterranean, rooting for life.

4. Link between NGOs and traffickers: fact or opinion?

Puzzled reactions have followed an op-ed by Il Fatto Quotidiano editor Marco Travaglio, claiming that the link between NGOs and human traffickers has been “established and even boasted of”. Complicity with smugglers, pull factor, the rising death toll in the Mediterranean: writing for Internazionale, Annalisa Camilli has responded to the many accusations levelled by Travaglio with a thorough fact checking. To those who, like Diego Bianchi, asked who established the link, Travaglio responded with a new op-ed: evidence of the connection between the NGOs and the traffickers are in the files of many Italian prosecutors. As Philip di Salvo wrote in Vice, this only shows how little Travaglio knows about the matter.

5. Mayor orders a cap to foreign students in the schools of Monfalcone

Next September, 60 children from Monfalcone, in the north-east of Italy, will not be going to school with their native Italian friends. They are children of foreign nationals living in the Friuli town – largely workers from the local Fincantieri factory. League mayor Annamaria Cisint has ordered a 45% cap to non-Italians in schools.

Human rights groups have no doubt: humanitarian protection is not only a right, but a tool that ensures inclusion, legality and safety. The crackdown announced by the Interior Minister would likely create more undocumented migrants and obstacles to ongoing integration processes, the Italian Refugee Council warned. Meanwhile, during a visit to the camp in Rosarno, Salvini insisted: “Only documented foreigners get to stay”.

New Walled Order is an illuminating report from the International Red Cross, warning against the criminalisation of solidarity. Between toxic narratives and state laws, “formal and informal barriers”, as the report calls them – access to essential services such as health care, psychological assistance etc is already being effectively restricted. The report also calls on governments to set up firewalls between access to public services for vulnerable people and immigration enforcement.

8. The New York Times in Macerata

The foreign press has been kept its eyes on Italy for a while because of the immigration debate. It comes as no surprise, then, that the New York Times sent Jason Horowitz to Macerata, where Luca Traini fired a gun on a group of migrants, trying to understand why the town’s attitudes towards hospitality and migrants have shifted so radically. We had visited Macerata back in February to meet with one of the survivors.

Open Migration contributor Marianna Karakoulaki published a piece in Deutsche Welle last week on two transgender refugees in her native Thessaloniki, where a groundbreaking ruling has allowed them to build a new life.

With all eyes trained on the Mediterranean, Frontex has admitted that the Spanish route could see a significant increase in migrant arrivals. Meanwhile, the new Balkan route – an adaptation following the recent border crackdowns by Serbia and Hungary – is busier than ever, and incredibly tough – read the report by Federico Annibale for Il Salto.