January 8, 2019
The new year begins as 2018 ended: 49 people, including women and small children, have been stranded at sea since December 22. Still no solution in sight, as frustration and tensions grown on board their ship.

49 migrants who were rescued by the ships Sea Watch 3 and Sea Eye have been stranded in the Mediterranean since December 22 while awaiting for a safe docking port.

Once again, both Malta and Italy refused to allow the migrants to disembark. The usual accusations against the NGOs followed, as EU countries failed to help 49 people in distress, including women and small children.

A few Italian mayors, such as De Magistris in Naples, offered to welcome the migrants, even as the interior minister doubled down on his policy of closing the ports.

The situation is compounded by the weather, and even the Pope in his Sunday address called for a quick solution:

“49 people rescued in the Mediterranean by two NGO ships have been on board for several days now, waiting to be able to disembark. I make a heartfelt appeal to European leaders to show concrete solidarity for these people”.

These words might change things within the League-Five Star coalition, even though interior minister Salvini said, “How many migrants are we taking in? Zero, we’ve already done our part”. However, Italian PM Conte and his deputy Di Maio offered to take in 15 of the migrants.

The German government has offered to participate in the reception – within the context of a European solution –  while the 49 migrants are still at sea, awaiting a decision on their future.

What is the situation on a migrant rescue ship after 16 days at sea?

Internazionale reports that the Sea Watch received food and supplies from two Maltese boats, and that 4 German MPs also visited the ship.

Interviewed by AGI, Sea Watch spokesperson Giorgia Linardi voiced her concerns “The migrants on board are showing patience and resilience, but there are signs that make us fear acts of self-harm. We see their moods changing every day. I spoke this morning with the ship’s doctor and he was very worried”.

“We are here on this boat and we do not understand what is happening,” Bob Kiangala, from the Democratic Republic of the Congo, told Reuters.

“We are not fish, we are not sharks, we are human beings like everyone else. We made this crossing, we risked our lives to get to Europe, and now that we have arrived, Europe refuses, and we do not know why.”

The tension is reaching a critical point: a few days ago, a migrant jumped over board in an attempt to swim to Malta, while according to the latest report, some of the migrants are beginning to refuse meals.

3. Mayors of major Italian cities against the Salvini bill

Naples, Palermo, Milan, Florence: a growing number of mayors are deciding not to enforce the Salvini bill on security and immigration, which was recently voted into law.

It all started when the mayor of Palermo, Orlando issued an order in the city not to comply with the bill, especially the measures excluding asylum seekers from civil registries.

“It is inhuman, it leads to more crimes and it reeks of racism”, Orlando said.

The interior minister promptly fired back: the mayors “will be held personally and legally accountable for violating a law of the State which brings order and rules”.

As Prime Minister Conte attempts to mediate by offering to meet with ANCI (the National Association of Italian Municipalities), more and more Italian regions are considering appealing to the Constitutional Court.

Here you can find an updated map of all the cities that have so far refused to obey the new law: 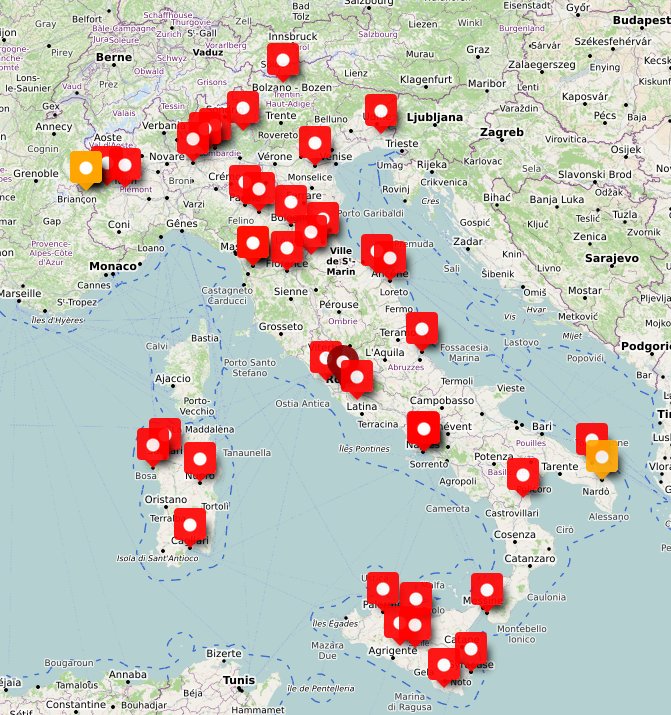 4. Smugglers are making profits thanks to Trump’s policies

Migrant’s despair is growing at the US border. So are smugglers’ profits.

Only a few asylum seekers a day, if that, are admitted at border crossings; for many migrants, the faster options is to hire a smuggler, or pollero.

“I honestly don’t want to cross illegally, but I don’t really have a choice,”, Julian Moreno, 37, from Mexico, said to the New York Times.

On New Year’s Eve, about a hundred migrants from Ecuador arrived in Tijuana with the Caravan of hope, only to be met with tear gas by US  border officers.

5. A Naval ship has been deployed to the Channel to intercept refugee vessels

The Royal Navy patrol vessel HMS Mersey has been deployed to the Channel to help deal with people attempting to cross to the UK from France. The move came after a formal request for military assistance from the home secretary, Sajid Javid. “My focus continues to be on protecting the UK border and preventing loss of life in the Channel,” Javid said, adding that the measure would be temporary.

Over the last few months, a growing number of people has been crossing the Channel from France to the UK, and arriving in Kent, with a total 539 in 2018. The arrivals have divided the Dover community, as the Guardian reports.

6. What happens to migrant children in the USA?

Following the deaths of 2 children in the custody of the Border Patrol, concerns are mounting over the plight of minor immigrants in the US. According to the New York Times, about 12,400 migrant children are now housed across roughly 100 permanent sites and two temporary ones. As videos of staff members abusing children surface, more and more families are deciding to take in a minor.

Last year in July, wildfires devoured the Greek countryside, cutting off escape routes from a coastal town and forcing desperate residents and tourists into the water. In the seaside village of Mati, local fishermen raced to help from their boats, pulling people from the waves. Among them were Gani Xheka from Albania, and Emad el-Khaimi and Mahmoud Ibrahim Musa, from Egypt. On Wednesday, the Greek government rewarded them with citizenship.

8. The number of illegal migrants in the EU has hit a five-year low

According to Frontex, the European agency for border control, the crackdown on migrants in the Central Mediterranean is working: an estimated 150,000 people entered the European Union through irregular crossings in 2018, the lowest total since 2013.

However, there has been a spike in Spain, which has become the main gateway to Europe: the country saw the number of arrivals double for the second year in a row to 57,000,  including 4,000 unaccompanied minors.

9. The ongoing deportation of Rohingya refugees

Several Rohingya refugees have been deported to Bangladesh after spending nearly five to six years in a detention centre in Saudi Arabia; a video released by Middle East Eye showed them being handcuffed, lined up and prepared  for removal. The same had happened recently to a Rohingya family of five in the Indian state of Assam.

Meanwhile, at Cox Bazar – the largest refugee camp in Bangladesh – the UNHCR has stepped up efforts to address the massive water and sanitation needs of Rohingya refugees and their hosts.

For every Syrian refugee being returned to Turkey from the Greek islands, another Syrian will be resettled to the EU taking into account the UN Vulnerability Criteria. In return Turkey will prevent sea crossings from its shores and the EU would allocate more than three billion euros, with an additional three billion at a later stage for refugees in the country. This is the text of the EU-Turkey deal, under which Turkey will receive 640 million euro in EU humanitarian funds in 2019.

“The European Union, in cooperation with Turkey, is bringing a real change in the lives of the most vulnerable refugees. I am very proud of what we have achieved together”, said Christos Stylianides, Commissioner for Humanitarian Aid and Crisis Management.